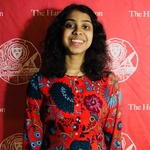 Staff writer Sanjana L. Narayanan can be reached at sanjana.narayanan@thecrimson.com.

Harvard professors are known for their cutting-edge research—and also for their effervescent and eccentric personalities. The Veritas Lab, hosted by Katelyn X. Li and Sanjana L. Narayanan, gives you a glimpse of both.

As the University prepares to open the new Allston campus in fall 2020, the Committee on Student Life discussed challenges associated with the move — including transportation and dining options — at its last meeting of the semester Thursday.

Though Harvard first announced its sanctions policy three years ago, the College has not yet decided whether to subject some student groups  — including House Committees and Diversity Peer Educators — to the penalties.

After a more than year-long vacancy, the search for an associate dean of students for inclusion and belonging is in its “final stages,” Dean of Students Katherine G. O’Dair said in an interview Tuesday.

Of the 58 total organizations applying for recognition, 44 were unanimously approved by both the Committee on Student Life and the UC Rules Committee, four were unanimously rejected, and 10 were contested by the two bodies.

The Committee on Student Life discussed an assessment of the social group sanctions, preparations for the new Allston campus, and a prospective audit of student organizations’ “comp” processes in its first meeting of the year Thursday.

This is the first time that the College has formally documented a disciplinary process for student organizations whose members do not comply with the sanctions.

Lowell House welcomed 49 new members — including former University President Drew G. Faust and Dean of the Faculty of Arts and Sciences Claudine Gay — to its Senior Common Room this fall.

Meghan Lockwood will serve as interim resident dean of Elm Yard, College administrators announced in an email to freshmen Friday.

A judge ruled earlier this month that the federal lawsuit alleging the College’s social group sanctions are discriminatory will be moving forward with a subset of the original plaintiffs.