As Massachusetts’s eviction moratorium is set to end in less than one month, state lawmakers are continuing to push for an extension.

Commonwealth Wine School — which offers wine classes ranging from tastings to multi-year certification programs — opened for in-person classes this month at the Garage in Harvard Square.

After 60 Years in Harvard Square, Family-Owned Bartley’s Burgers Is Up For Sale

Mr. Bartley’s Burger Cottage, a Harvard Square fixture for 60 years, is for sale, according to owner Bill Bartley.

In a marathon meeting Thursday night, the Cambridge School Committee approved a proposal for remote-only learning for most Cambridge Public School students in grades 4-12, allowing preschool through third-grade families to opt for some in-person learning.

As Massachusetts moved into the third phase of its reopening plan Monday, Harvard museums and libraries — as well as local fitness centers and movie theaters — are keeping their doors shut.

After more than three months since the initial outbreak of the novel coronavirus in Cambridge, many local businesses have struggled to stay open, with a few even closing their doors permanently.

According to a recent paper from a team of Harvard economists, not only do partisans see things differently, but their political views distort their basic understanding of the issues — even when reality may be contrary.

A Harvard Square Without Harvard

With some estimates predicting that 40 percent of local businesses will not reopen after the pandemic ends and that another 25 percent will fail within the year, Harvard students may return to a neighborhood that looks radically different from the one they left in mid-March.

‘Working As One’: Cambridge Responds to School Closures

When the coronavirus pandemic caused many academic institutions to close in mid-March, students were sent home to transition to remote learning. Cambridge Public Schools was no exception.

An international research team that includes two Harvard professors has determined that the Spinosaurus is the first known swimming dinosaur, according to a study published Wednesday in the peer-reviewed journal Nature. 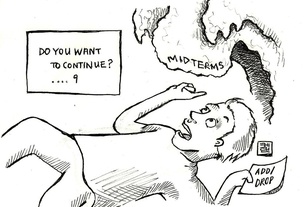 How To: Do Your Best on Timed Remote Midterms