Believe it or not, there is a robust puppetry community in Boston, and the people behind Puppet Showplace offer them a place to perform their art.

I make the trip to Brookline on a gloomy Thursday. As I stand inside the lobby of the theater, a space whose walls are lined with different types of puppets for sale, I remind myself to look and not touch, an instinct that, as I’ll learn shortly, children here do not share. A few minutes later, several first-graders pile into the space, reach for the puppets, and ask to play with them. The answer is a resounding yes, but followed by, “Be very careful with the marionettes.” Artistic Director Roxie Myhrum ’05 pops into the lobby from behind a curtain and invites us into the theater. Once inside, she consults the elementary school children on how they think an audience should behave.

Colorful sculptures wrap around the walls and hang from the ceiling. The kids and their chaperones are causing mayhem at a mini-puppet theater photo booth. Posters and fliers around the lobby invite patrons to puppetry classes of all kinds. Adults are welcomed to Cabaret Puppetry and marionette classes; children are invited to birthday parties and to a “Puppets Around the World” series.

I’ve come to see “Under Night Sky,” a shadow and rod puppet production by Sarah R. Frechette of PuppetKabob. It’s the story of a young girl who listens to her grandmother tell stories of her enslaved ancestors’ escape from the South, and her mother’s determination to attend school. Though these are certainly not typical puppet show themes, Frechette wants her work to challenge students, to introduce them to important themes, and to create a visuals for concepts that they already know, so that they can better understand our language and their history.

Silliness is important in puppetry, but at Puppet Showplace, it’s more important to produce meaningful work. Frechette praises Puppet Showplace for supporting young artists. Her senior thesis at the University of Connecticut’s Puppetry Arts Program was debuted at Puppet Showplace. The theater handles marketing, production, finding an audience, and providing moral support to returning and new artists, so that they are better able to focus on the shows themselves.

Here, puppetry is not all about the kids. In addition to “Puppet Cabarets,” Puppet Showplace produces semi-monthly “Puppet SLAMs,” which, according to Frechette are a “little dark, little twisted, little raunchy, but all-adult, so it’s okay.” An image of stand-up puppetry comes to mind: a dark room, a spotlight, an audience sipping beer and laughing. Resident artist Brad Shur has also produced a show titled “Cardboard Explosion,” which Myrhum describes as a “choose-your-own-adventure,” in which audience members make suggestions for the plot throughout the show. This format seems perfect for college-aged students, who stand some place between all that silliness and a sense of maturity.

An Apprenticeship in Puppeteering

By Georgina Parfitt
On Campus

The Art of Puppeteering

By Alice S. Jeon
On Campus

'Avenue Q' Comes to the Oberon 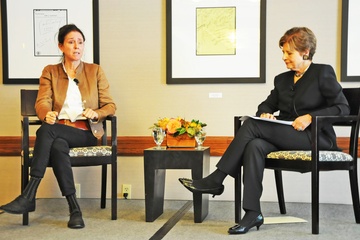 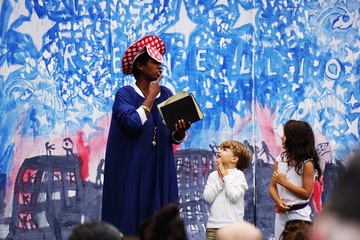 The 'Hippies with Dolls' Take Cambridge