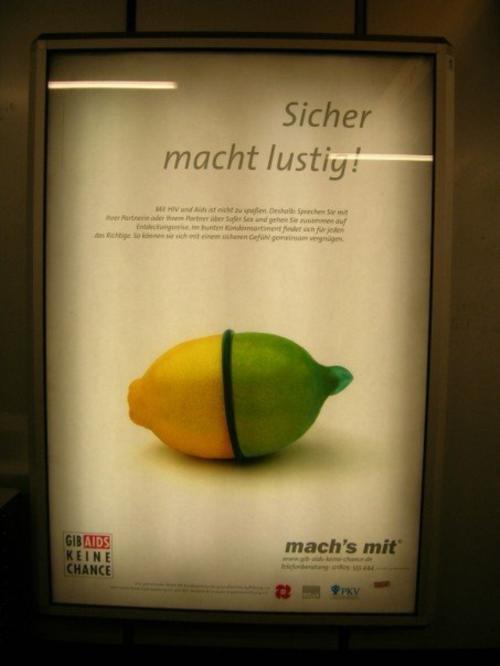 One of many pro-condom ads on the S- and U-Bahn promoting safe sex by putting condoms on vegetables and fruits.

I’ve repressed my middle school days so thoroughly that almost nothing reminds me of them now, but in my few weeks in Berlin, the city has repeatedly evoked those troubled times. It's mostly been general impressions: of being reduced to a vocabulary that lacks words like “recommend”; of having to spell-check every piece of writing anyone else might see, even a three-line email; of, at 5’7”, fitting into approximately the same place in the Teutonic height spectrum as I did in the American one 8 years ago, when I was 5’1”. But by far the most vivid evocation came in the form of a poster I saw in a subway station on my very first day here. It showed a bunch of bananas, each one half-covered with a differently colored condom, and, above them, a German exhortation to “Stay strong!” Instantly, I was back in 8th grade, on the day when the female English teacher, who for our purposes was also a sex-ed teacher, demonstrated condom use by stretching a lubricated rubber around the fist of one of the most muscular boys in the class. “Now, people used to do this with cucumbers,” she explained. “Or bananas. But I wanted to show you how big they are.” At the time, I thought little of it. But as I grew older, left her class, and eventually came to college, I learned that my experience was quite unique. I read about the movement for abstinence-only sex education and talked to friends who had been raised in progressive atmospheres and had attended public schools, yet had never seen a demonstration like ours. Politicians denounced the possibility that anyone under the age of 18 might ever see a condom, even demanding that condom ads be removed from television—television, which, on average, exposes children to four murders daily! Condoms were not appropriate. Promoting them was not in good taste. All of which brings us back to Berlin, and the public service announcement, which was only one of very, very many sponsored by the German Federal Center for Health Education. I have yet to see a subway station without such an ad, and there are well over 300 subway stations here. They showcase all different kinds of produce—not only the obvious cucumbers and bananas, but also less likely models like lemons and potatoes—and diverse catchy slogans, like the words “Poppt sicher!” above a condom-covered ear of corn. (“Poppen” means to pop, but I can only assume it also connotes ejaculation. “Sicher” means safely or surely.) Every Berliner who takes public transport—which is basically every Berliner, from schoolchildren to the elderly—sees these ads daily. And they’ve yet to generate major controversy. There are a multitude of possible reasons for the difference in attitude, among them Europeans' generally more liberal views on sex and many Berliners' familiarity with governmental interference in private life, a product of their experiences under the old East German regime. But it seems that the most important factor is a shared sense of urgency about safe sex: in the bottom-left corner of each poster, regardless of produce type, condom color, or slogan, is a box containing the words “Gib AIDS keine Chance”—don’t give AIDS a chance. The smaller print reminds the reader that every instance of unsafe sex is an invitation to premature death. And here’s where this postcard, like the posters it describes, goes from silly to serious. Considering that this is the grim reality, it’s difficult to justify the absence of such campaigns in the U.S., particularly on grounds as trivial as taste. It’s not just that, as one placard of a lemon sporting a condom declares, “Safely makes fun!” It’s that condoms are indeed, as a particularly punny ad featuring them on potatoes says, “Überlebensmittel”: something that goes over (über) groceries (Lebensmittel) on the one hand, but also a means (Mittel) of “Überleben”—survival. Informing young people about them is the last arena in which the U.S. should fall behind Europe. So I’m issuing a patriotic challenge: Let’s create the best condom campaign possible to promote safe sex in the States, and then put it all over schools, television, and, yes, subways. I’m sure that with our superior wit, determination, and punning abilities, we can far surpass every other country once we put our minds to it. And if not, we can always adopt the German approach, but substitute our own slogans, our own condoms, and our own vegetables. American potatoes are sexier anyway. Marianne F. Kaletzky '08, a Crimson arts chair, is an English and American literature and language concentrator in Mather House. She actually finds strawberries much sexier; vegetables do nothing for her.

Five Reasons for Reason and Faith