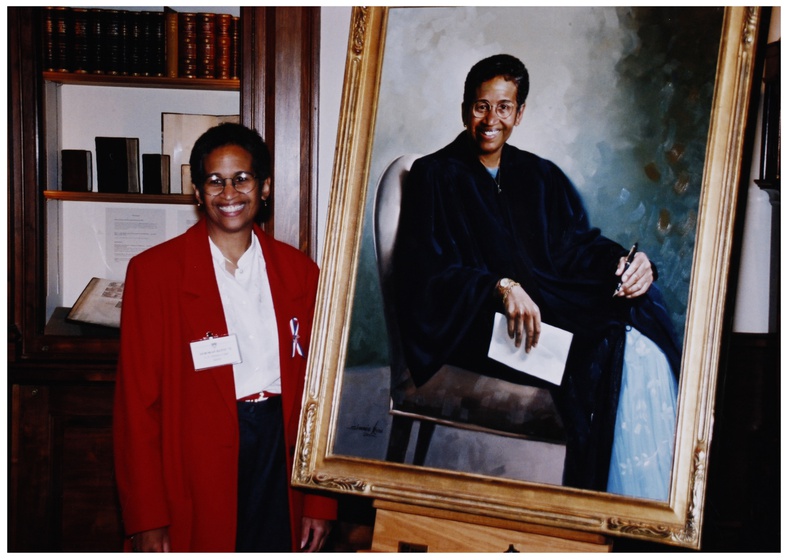 ‘Deborah Was All About the Truth’: Remembering Deborah Batts, the First Openly Gay Federal Judge

Deborah A. Batts '69 — who unexpectedly died in February 2020 at age 72 due to complications from knee surgery — had an extraordinary legal career by any standard. But she also accomplished an important national first. With her confirmation to the federal bench in 1994, she became the first openly gay federal judge in the United States.

After her first year at Harvard Law School, Deborah A. Batts ’69 considered leaving. It wasn’t because she found the coursework too demanding, or because she was intimidated by the Socratic method of teaching.

Rather, she’d come to the Law School in 1969, following the start of the Vietnam War and the assassinations of Martin Luther King Jr. and Robert F. Kennedy ’48, with the hope of using law to fight for social justice. She found the curriculum too theoretical and instead wished she could learn about the law’s practical applications. The classes themselves she found unengaging — at least compared to her undergraduate courses at Radcliffe College, Harvard’s college for women at the time. Batts began to wonder why she was even attending law school.

But her friends saw things differently. Even if HLS wasn’t exactly what Batts had hoped for, she could still use the law as a force for good in the future. So she stayed.

Her decision paid off.

In 1994, Batts became a federal judge of the Southern District of New York. Before becoming a judge, she was the first Black professor at Fordham School of Law, where she taught property law and the law’s effects on non-traditional families.

During her time on the bench, Batts’s decisions were wide-ranging and influential. In the decade-long Central Park Five civil case, in which five Black and Latino men who were wrongfully convicted of assault and rape sued the City of New York for malicious prosecution, racial discrimination, and emotional distress, Batts denied the City’s motion to dismiss the lawsuit; the City eventually settled for $41 million. Batts also held the Environmental Protection Agency accountable for failing to clean up toxic dust in the city’s air following the terrorist attacks on September 11, 2001. Later in her career, she helped people leaving incarceration to start new lives and stay out of prison through the district’s Reentry through Intensive Supervision and Employment Court program.

Batts — who unexpectedly died in February 2020 at age 72 due to complications from knee surgery — had an extraordinary legal career by any standard. But she also accomplished an important national first. With her confirmation to the federal bench in 1994, she became the first openly gay federal judge in the United States.

Before knowing Batts as a federal judge, or even the first openly gay federal judge, I knew her as my neighbor. We lived in the same New York City building, she in the apartment directly below mine. I’d occasionally run into Batts and her wife Gwen L. Zornberg in the elevator. Batts would give me a quiet hello and a smile before ducking out at her floor. I was always in awe of Batts’s judgeship. When I was little, my parents joked that if I made too much noise stomping on our floor, I could get into serious legal trouble with the judge downstairs. There was a small, irrational part of me that believed it.

But for all my admiration, I never knew Batts was the first openly gay federal judge until after her passing. How could I have lived right above her for 11 years without even knowing?

When I go to interview Zornberg, Batts’s wife, I don’t set up a Zoom call or meet her in an office at work. I simply walk a flight downstairs and knock. Zornberg opens the door and welcomes me.

In the apartment, I can feel Batts’s presence. There is a wooden cabinet with a glass door, behind which sits a delicately stitched needlepoint, proclaiming “BE MERRY AND GAY.” Sitting next to it is a porcelain plate with a baby photo of Batts and her identical twin sister Diane on front. On the windowsill is a collection of Batts’s glass awards, one with a quote from her engraved on the front.

Zornberg tells me about a note she received from Batts’s Radcliffe classmate after Batts’s passing. “Debbie had this beaming smile, which was much needed at Radcliffe,” the note read.

The note reminds me of something I’d read in a Crimson article written 54 years ago, when Batts served as the first president of the Radcliffe Student Union.

“A story is going around about the president of RUS,” the article begins. “She visited the dentist’s, where he told her, ‘My God, girl, you’ve got to stop smiling so much — your teeth are beginning to buckle!’” The article then claims that at one point, “the RUS didn’t have much it could depend on besides the diplomatic smiles of Deborah A. Batts ’69, its new president.”

The RUS was created to give students a greater say in decisions that affected their lives at the school. “We didn’t really feel as though we had an anchor, or a place, or a voice,” says Helen B. Cohen ’69, Batts’s friend. “It was as though we’d been stuck on to Harvard.” Through the RUS, Batts explained in a 2007 oral history interview with the Black history organization The HistoryMakers, “We wanted to be heard.”

As a leader, Batts was never “daunted by this general misogyny, exclusion, elitism of the University, which was the prevalent culture,” says Ann V. Bastian ’70, who served on the RUS with Batts. As president, Batts attempted to negotiate with administrators to allow student representatives to sit on the College Council, Radcliffe’s highest governing body.

“I remember thinking, this place pisses me off,” Bastian recalls with a laugh. “Why isn’t [Debbie] more pissed off?”

During President George H.W. Bush’s administration, Batts received a call from Senator Daniel Patrick Moynihan (D-N.Y.), her former law professor. He asked if she’d ever considered being a federal judge. “She thought it was a prank by other faculty members at Fordham,” Zornberg says.

But an application showed up in the mail the next day, and with Moynihan’s encouragement, she filled it out. She presented herself with complete honesty. Her decision to be open about her sexuality, Zornberg says, was “so Deborah A. Batts, because Debbie was all about the truth.”

Batts’s confirmation sailed through the Senate with a voice vote. She was confirmed during Gay Pride Week. “It was such a huge deal,” Zornberg says.

Although Batts recognized the importance of the milestone, she explained she “did not want to be known as the gay judge” in a 1994 American Bar Association Journal article. “I’m a mother,” she said. “I’m an African American. I’m a lesbian. I’m a former professor. If people assume any one of these aspects is going to predominate, it would create a problem.”

Perhaps, I realized, this was why I’d never known about Batts’s pioneer status. And, in a way, it seemed that that was what she may have wanted.

“It was like hiring Jackie Robinson, putting him on the field and no one saying anything about it,” said appellate court judge Stephen R. Reinhardt in the 1994 article.

In some circles, though, Batts’s milestone created a splash. “Harvard Law students were writing about this like the equivalent of Sappho — no one could believe that this could happen,” Zornberg says, laughing.

California State Senator Scott D. Wiener, who was the chair of HLS’s BGLTQ students association when Batts was confirmed, says her confirmation was “a very loud message to young people, to law students, to young attorneys.”

The Law School’s BGLTQ association commissioned a portrait of Batts, painted by Simmie Knox and unveiled in 2001. Knox’s other works include portraits of Thurgood Marshall and Ruth Bader Ginsburg. Batts’s portrait now hangs in the Law School in Pound Hall. It was the Law School’s first portrait of an openly gay person, sixth of a woman, and seventh of a Black person.

“I am so touched and amazed that anyone would do this,” said Batts when the portrait was unveiled. “In fact, I am as embarrassed as I am pleased.”

Before I leave, Zornberg shows me another portrait of Batts hanging in her living room. In the drawing, a cartoon Batts presides over the courtroom, while Looney Tunes characters bounce around the room. Batts loved Wile E. Coyote, Zornberg explains. “Wile Ethelbert Coyote never got tired — he was always inventing something new,” Zornberg says. “She liked that model of just persevering no matter what.”

— Magazine writer Sage S. Lattman can be reached at sage.lattman@thecrimson.com.

This piece is part of The Crimson’s 2022 Pride Month special issue.