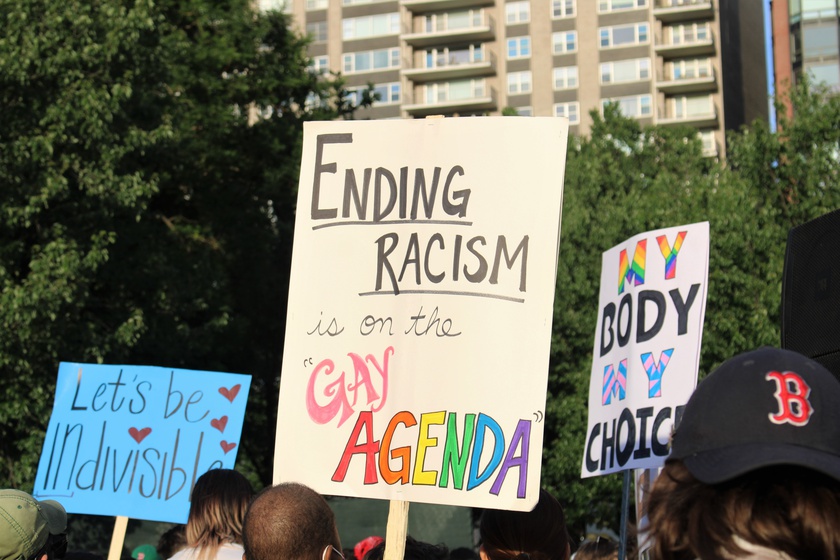 Meimei Xu Participants hold up signs reading, "Ending Racism is on the Gay Agenda," and "My Body My Choice" during a Pride celebration in Boston.

‘The End of One Era’: Marching Toward a New Boston Pride

After years of mounting controversy around excessive commercialization and its lack of racial and transgender inclusion, the Boston Pride organization dissolved last year — bringing an end to one of the oldest gay rights nonprofits in the United States and the parade it had been organizing for the past 50 years. What's next for Pride in Boston?

From the single-family homes and parks of West Roxbury to the seaside attractions of the downtown Waterfront, rainbow flags bespeckle Boston like flowers in the spring. Across the city, residents have been partaking in a mosaic of light-hearted activities — educational exhibits, music performances, drag shows, and dance parties. The one thing you won’t see this Pride month? An official parade.

Within the whirlwind of jubilant festivities exists a complicated story of protest and discord. After years of mounting controversy around excessive commercialization and its lack of racial and transgender inclusion, the Boston Pride organization dissolved last year — bringing an end to one of the oldest gay rights nonprofits in the United States and the parade it had been organizing for the past 50 years.

In 2015, a group of BGLTQ activists of color held a sit-in in the middle of Boston Pride’s parade for 11 minutes to call attention to the 11 transgender people murdered in the country that year. They also demanded that the organization diversify its leadership and include lower-income areas in its parade route. In 2018, protestors staged a similar sit-in criticizing the police presence at Boston Pride events, as well as the organization’s involvement with corporations that funded political candidates with anti-BGLTQ stances.

Boston Pride received backlash in June 2020 after it removed references to Black Lives Matter in a revised press statement following the murders of George Floyd and Breonna Taylor. Over 80 percent of its volunteer workforce quit in protest.

The controversy reached a boiling point in December 2020, when dozens of BGLTQ groups boycotted the organization and called for its board to resign, among other demands.

Val C. Bee — a co-founder of Boston Black Pride, a subcommittee within Boston Pride dedicated to serving the needs of queer people of color — says she felt the Boston Pride board of directors had their heads “stuck in the sand” when it came to the concerns of BGLTQ organizers of different identities.

“A lot of the conversations were really around not feeling heard, seen, respected, valued. We were individuals who were doing so much of the work on the ground yet had to beg for dollars to do so — had to beg from our board members,” she says.

“It became apparent that no matter what Boston Black Pride was doing, Latinx Pride was doing, Trans Resistance folks were doing under the umbrella of Boston Pride, Boston Pride had its own agenda,” she adds. “It had nothing to do with representing the community members that were part of that LGBTQ umbrella.”

Despite hiring diversity consulting firm Dorrington & Saunders and creating a transformation advisory committee to address the backlash over these concerns, Boston Pride and its all-white board of directors disbanded in July 2021, inciting a mix of reactions. They wrote in a statement the decision was made to allow others to “emerge from the community to lead the Pride movement in Boston.”

Casey A. Dooley, another co-founder of Boston Black Pride and its former chair, says that the dissolution was “not in the best interest of the community.” Dooley — who is also a founding board member of Trans Resistance, an organization that had joined the boycott — says that instead, Boston Pride should have transferred the funds and resources of the old organization to a new board.

“The community didn’t want them to just go home and take everything with them,” she says. “It would have been better for the community [to have] a transition of a more diverse, representative board that they could have facilitated, and they chose not to.”

Kelsey Grunstra, the Communications and Fundraising Manager of the Massachusetts Transgender Political Coalition — another organization that had joined the boycott — calls Boston Pride’s decision to dissolve rather than transition its leadership “disappointing.”

“We’re not really sad to see Boston Pride go,” she says. “But at the same time, it does feel like a loss for our community to not have something happen and also to not have that 50-year-old infrastructure — this organization that has been doing this for such a long time — given over to people that deserve to be running that.”

The Boston Pride board of directors did not respond to requests for comment.

Joan Ilacqua, the Executive Director of the History Project, says the look, character, and purpose of Pride has always been contested.

“These kind of tensions have always been there because the queer community is not a monolith,” Ilacqua says. “There are different people within the community working toward different goals and really reacting to what’s happening.”

The History Project is one of the nation’s largest independent BGLTQ archives. Last year, the project announced it would support the boycott of Boston Pride.

Pride dates back to the 1970s, according to Ilacqua. The parades emerged as homages to the 1969 Stonewall Inn riots, in which patrons of the gay bar in New York City fought back against violent police raids and harassment. The riots, also known as the Stonewall Uprising, fueled the gay liberation movement and the 20th century fight for BGLTQ rights in the United States and around the world.

Following a year of teach-ins, Boston held its first Pride parade in 1970, which Ilacqua describes as “totally political.” Around 200 marchers read a list of demands at various places in the city that did not support BGLTQ people, such as the Boston Police headquarters, the Massachusetts State House, and the Cathedral Church of St. Paul.

Since then, the parade has transitioned through a number of organizations and organizers, facing debates over who should be allowed to march — Drag queens? Businesses? Politicians? — how political or celebratory it should be, and what the route should look like. Pride and the political message it carried often changed with pivotal moments in BGLTQ history, such as the 1980s AIDS epidemic and the early 2000s struggle for marriage equality.

Ilacqua says engaging with BGLTQ history can help queer individuals have a “cultural communal experience” and allows them to learn from activists of decades past.

“When you come out, it’s not like someone gives you a book,” Ilacqua says. “No one gives you a guide. No one tells you where to find community. And you kind of need to find your roots in that way.”

Grunstra, the communications and fundraising director of the Massachusetts Transgender Political Coalition, says the history of activism surrounding Pride “was lost in a big way” with “larger Pride organizations like Boston Pride.”

“The first Pride was a riot,” Grunstra says. “It’s acknowledging the activism behind what Pride has become. And I think that’s the kind of thing that we don’t want to lose sight of again.”

For example, Grunstra says Boston Pride never made a meaningful effort to include transgender and nonbinary people.

“For trans folks it became obvious that our community was not the priority,” Gunstra says. “And we were just kind of being included just because of the nature of the event — not actually because anyone wanted us there.”

She adds that Boston Pride’s dissolution was “very indicative” of the unequal power dynamics between the organization’s leadership and queer and transgender people of color.

Kurtlan Massarsky, Director of Development and Marketing for the decades-old, youth-centered social support organization Boston Alliance of Gay, Lesbian, Bisexual and Transgender Youth, echoes the need for BGLTQ organizations to carry the torch of activism.

“I think it’s a requirement that organizations, BAGLY of course included, are being proactive in not just their conversations around but in their actions towards better equity, better diversity, better approaches, and opposing structural oppressions,” Massarsky says.

Hamel, a BGLTQ activist in Boston who only goes by their last name, says they would have preferred if Boston Pride had worked toward inclusion instead of dissolving.

“Rather than throw out the history and the work and the organization that Pride represented, I would have preferred that they chose to hand the reins back to the community and to allow the community to go through a process to determine how Pride should look in the future,” they say.

In the wake of Boston Pride’s dissolution, the city is seeing more alternative public Pride events that aim to be inclusive, responsive to local demands, and true to the activist roots of Pride.

The Boston Dyke March, an event that centers anti-capitalist, intersectional gender liberation, drew hundreds of demonstrators for its 25th annual march on June 10. Unlike Boston Pride, the organization is composed of a flat committee structure of all volunteers. Hamel, a committee member for the March, says the members don’t proceed on decisions unless they have full consensus on them.

“We provide an alternative vision of what an event can look like,” Hamel says. “We don’t accept corporate donations. We raise most of our money through donations, fundraisers, our tabling.”

Hamel says the Dyke March, formed as an alternative to Boston Pride, pushes back on “rainbow capitalism,” the commodification of queer identity and culture during Pride month.

In addition to the Dyke March, other Pride events included Boston Pop-Up Pride, the Trans Resistance March, and the Trans Pride celebration hosted by the Transgender Emergency Fund of Massachusetts, a support organization for low-income and unhoused transgender individuals.

Massarsky says the dissolution of the original Boston Pride organization reflects the evolving priorities and values of Boston’s queer community.

“It’s important to take the long view,” he says. “There have actually been a number of iterations of Boston Pride, and the dissolution of Boston Pride was just that really — the end of one era.”

As for the future of Pride in Boston, BGLTQ activists and organizers say that it’s a colorful haze. Nonetheless, they agree that going forward, Pride must prioritize equity and inclusion.

“I have no idea what’s next for Boston as far as Boston Pride,” Massarsky says. “I do think it will be creative. I think it will be engaging. I think at times it will be messy. And I think if the majority of people are approaching these discussions with open hearts and open minds, we’ll see some really great things in the future.”

— Staff writer Ryan H. Doan-Nguyen can be reached at ryan.nguyen@thecrimson.com.

This piece is part of The Crimson’s 2022 Pride Month special issue.