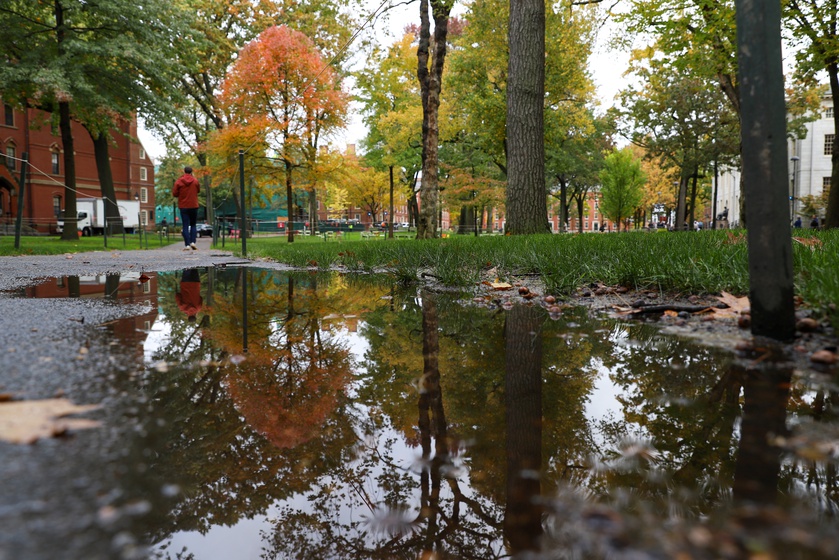 Ryan N. Gajarawala Harvard Yard is home to most of the first-year dorms on Harvard’s campus.

Do You Feel What I Feel?

Soliciting laughs at the expense of our struggles can be hilarious, but every now and then we ought to adopt a more positive outlook and foster actually productive discussions. The morose tunnel of dark humor can have a faint light at the end of it too.

I remember watching bestdressed, a popular fashion YouTuber, crack some self-deprecating jokes while she showed off her thrift shop finds. In the intro of her video she quips, “I’m a little bit congested and sick right now and kind of just feel like a spicy piece of trash, but when do I not?”

In the comments, one viewer exclaims, “shes so FUNNY i feel like beauty gurus / fashion vloggers never have a sense of humor but this girl is hilarious.” Another subscriber writes, “we love an intellectual youtuber that tackles & freely talks about actual issues instead of just calling everything cute like your basic youtuber 😔✊” People seem to love her — she’s “quirky” and “relatable.”

The way bestdressed talked about her mental health made me feel like I could joke in the same way. I understood the appeal of treating mental health humorously — if I closed YouTube and opened Twitter, a joke about suicide comforted me because it reminded me that I wasn’t alone. Jokes like these were acceptable. Each tweet gave me a model for expressing my own feelings and struggles with depression. Even if I was sad, I could be clever. My sadness became my goldmine; I could express myself through dark humor in a way that no other “basic” girl could.

After all, conversations about depression have entered the mainstream. Mental health matters! “Stressed, depressed, but well dressed” was a Tumblr 2014 aesthetic. “13 Reasons Why,” a show about suicide, was somehow miraculously renewed for four seasons.

But as the demand for popular media about depression has increased, the potential for thoughtless, easily marketable products about mental illness has increased also.

As she lounges in a bathtub with black water, D’Amelio repeats, “Sometimes I don’t want to be happy.” In the chorus, she continues: “Sometimes I just wanna be lonely / Don’t need you to hold me / If I’m low you don’t need to care / Let me be sad.”

In an interview, D’Amelio explains that, “When this song came out, everyone was really not happy and stuck their house so I think it meant a lot to everyone realizing that they didn’t always need to pretend like life was so perfect and they can have a bad day.”

Some might say that the song is meant to validate having emotional ups and downs, but to me, it feels like she romanticizes a diluted image of depression. If someone is truly stuck in a cycle of depression, should you listen when they say “let me be sad”?

When I was struggling with depression, I did just want to be happy. But having gotten so used to my toxic, cozy cave of sadness, I felt guilty whenever I felt happy. Dixie sings “If I’m down just leave me there / Let me be sad.” But when I was at my worst, I prayed that someone, anyone, would care enough to not leave me there, but instead to distract me with their positive energy and love.

Well-intentioned efforts to erase stigmas around mental health have inadvertently made mental health struggles almost a badge of honor for some. Having a mental illness means you’re edgy, having gone through trauma makes you funnier, insecurity demonstrates admirable humility. Although this has broken silences around mental health, it also has led to a desensitization of conversations about mental health disorders.

This desensitization can lead to people talking about mental illness flippantly: “I have two exams today. Ugh, I want to kill myself.” Offhand remarks like these are not always examples of someone using humor as a coping mechanism — they often come from individuals who aren’t willing to discuss suicide or depression seriously. In my experience, many of the people who make these kinds of jokes about suicide for minor inconveniences have not seriously struggled with suicidal thoughts themselves.

These seemingly inconsequential statements can feel like cruel mockery from those who have not truly experienced the pain they so easily perform as a joke.

The meanings of “depressed” and “struggling with mental health issues” have transcended their medical definitions. We shouldn’t use medical definitions to gatekeep a disorder from the masses — everyone experiences depression in their own way, and just because one person’s depression doesn’t fit a particular mold, that doesn’t mean we should invalidate their experiences. I know that the increased visibility of mental illness has created new paths for new people to be open about their struggles, and as more people come forward, less shame weighs on a word like depression.

Still, these popular representations of depression can also allow mental health issues to be adopted as an aesthetic or a personality trait, a trend that can be detrimental for actual improvement of public health.

Logic’s song “1-800-273-8255” populated radio waves everywhere in 2017. It is perhaps the twenty-first century’s best-known attempt at raising mental health awareness. I also hate this song with a burning passion.

His lyrics revolve around the repeated, painfully vague and general sentiment: “I don’t wanna be alive, I just wanna die, WHO CAN RELATE.” It strangely resembles an incredibly bad motivational speech. In the second to last stanza, Logic says “I finally wanna be alive” and “I don’t wanna die anymore” four times in a row respectively. In his lines, Logic references a sudden change that makes it seem like beating depression is as simple as a chorus shift.

Joyner sings, “Just make sure you tell my family it’s okay, I’m sorry/But it’s too late, I’m sorry, so much weighing on me/I don’t wanna live to see another day, I’m sorry.” The repetition of “I’m sorry” captures the heavy guilt that suicidal individuals often feel. Lucas doesn’t simply characterize feeling suicidal as “I don’t want to live.” He focuses on the perspective of someone who has family and friends, one who has struggled and fought. To me, Joyner’s song, in some ways, is about recovery. It acknowledges the complex ties that people have to their loved ones — ties that both inspire feelings of guilt and also produce a sense of compassion to help people stay alive. The song reveals the impact one’s suicide could have on others, and although it’s a painful idea, it’s an important one — it’s an idea that can give people a reason to live. I know it gave me one.

Which song was more popular? Logic’s.

In a way, Logic’s song almost reinforces the stigma of depression. It’s easy and simple: Just tell someone “they got everything to give right now,” and they’ll no longer want to kill themselves. Logic said that he wanted this song to be “an anthem,” but an anthem for whom? Is just saying “I don’t want to be alive” a bunch of times relatable or empowering for those who truly struggle? Through his lyrics, Logic has contributed to a confused and amorphous conception of what depression is — it becomes characterized as simply an affect, one muddled by sadness and thoughts of suicide. Songs like Logic’s that perpetuate monolithic ideas about what experiencing depression is like. Depression, in this formulation, is static — it’s about indulging in sadness.

I used to be almost too comfortable with my sadness. Dark humor enclaves of the Internet awarded those affected by mental health struggles with badges that declared “I’m not like other girls.” I fell deeper into an abyss of inescapable depression. I was even proud of my depression. I was proud of the fact that I had gone through difficult mental struggles, that I wasn’t perfect, that I was strong. I was proud that I wouldn’t put up a front of perfection.

As a sad, lost freshman in college, I just wanted to find my place. I wanted to know who I was. Throughout my first two years of college, I thought I had discovered who I was: depressed. What seemed like self-acceptance, though, was merely resignation. I was depressed, and that’s all I was. Because that’s what I believed, and others believed it too.

Although I encountered my fair share of mental health struggles in high school, I had never really considered myself “depressed.” I was mostly a super stressed, pressured, insecure teenager. But in college, I was exposed to cultures of Harvard students bonding over our stress, other college students openly cracking jokes about their severe mental health struggles, and edgy, moody kids smoking cigarettes solemnly. I began to catch every and any sad feeling and grab onto it. My humor was sad. My thoughts were sad. My clothing was sad, my attitude was sad. I had morphed into this big gray cloud that wasn’t who I really was. Obviously, I had struggled with intense feelings of sadness in the past, but when I did, I wasn’t just a caricature of sadness, one that I had enabled myself to become and one that other people saw me as.

Realizing that my depression was not a personality trait helped to change my recovery and outlook. I don’t make as many dark jokes now, I feel more hopeful for the future, I feel positive about my life, I feel focused and grateful for the small things. My “bad life” simply turned into bad “moments.” And who doesn’t have bad moments?

What ought to be normalized is overcoming depression. I’m not advocating for blind optimism — I’m asking for a middle ground. Being depressed is not a good thing. It’s not something to be shameful about either.

Soliciting laughs at the expense of our struggles can be hilarious, but every now and then we ought to adopt a more positive outlook and foster actually productive discussions. The morose tunnel of dark humor can have a faint light at the end of it too.

— Staff writer Ejin K. Jeong can be reached at ejin.jeong@thecrimson.com.