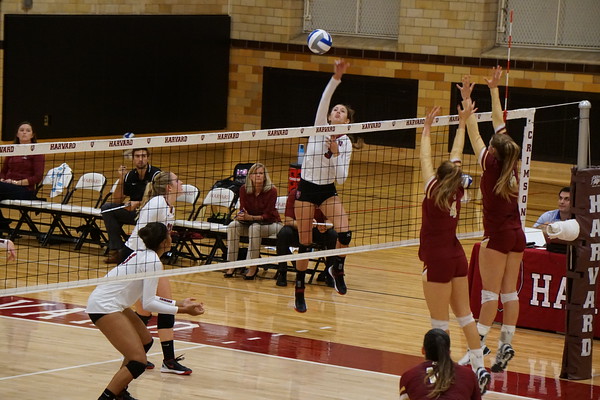 Jenior Paige Kebe was force to reckon with against the Big Green with 11 kills on Saturday in Hanover, leading the team.

The Harvard women’s volleyball team entered its bout with Dartmouth on Friday with neither history nor momentum on its side. The Crimson had lost its last two Ivy League openers to the Big Green in disappointing fashion, while Harvard this season had struggled out of the gate, picking up only two wins in its first nine games; Dartmouth, meanwhile, had notched six wins in 10 contests.

But the Crimson left Hanover, N.H., with something that Dartmouth has yet to obtain: a 2016 Ivy League victory.

“I think it was a really good start to our Ivy League run, especially winning in three,” junior Paige Kebe said. “We could set a standard early of being the dominant team in the league and just to show the Ivy teams that we’re the ones to beat.”

The Big Green opened up play by stringing together six straight points, four of which came on attacking errors. Freshman Maclaine Fields was able to stop the run temporarily with a kill for the first point of the game for the Crimson, but Dartmouth managed to retain a five-point lead for a large portion of the set, pushing the score to 17-12.

But just as it looked as if Dartmouth was on track to hand the Crimson its third-straight Ivy League loss, three Dartmouth errors combined with a kill from freshman Grace Roberts Burbank and an ace from classmate Erin McCarthy tied the match up at 17 apiece. After trading jabs, the Big Green had a chance to take the set, up 25-24, but a service error from co-captain Emily Astarita knotted the game at 25 all. From there, the Crimson took over the reigns—freshman Isabelle Tashima registered an ace, while sophomore Christina Cornelius capped off the set with her third kill of the set.

“I was really happy with our team’s focus and composure, especially under pressure,” Kebe said. “In the first game, it was very close and we all stayed pretty calm and were able to execute.”

After taking the second set with relative ease, the Crimson found itself down early in the third set, trailing 6-2 after four errors. That lead would not last long into the set, as Harvard pulled together a 13-5 run led by three kills from Burbank, one of several freshmen who had an impact during the contest.

“I think the transition to the team has been super, super easy,” Fields said. “That’s because when we came in, we went on a retreat and immediately [the upperclassmen] just embraced us…. At a lot of places, that doesn’t happen all the time.”

The final set was a game of runs, as Dartmouth made one fast final push to force another set with a 7-1 charge, edging out to a two-point advantage, 18-16. The game would remain within a few points until the waning moments of the match. Tied at 22 points, two Big Green errors and a Dartmouth kill put Harvard within a point of victory. From there, the three-time All-Ivy First Team member in Bain took matters into her own hands, taking an assist from McCarthy and powering an attack over the net to end the match.

Leading the team in total attacks, Kebe provided an offensive spark for Harvard, recording an efficient 11 kills in the winning effort. Three players—Fields, Cornelius, and Burbank—all finished with 7 each.

The Crimson was able to shut down Astarita—an All-Ivy First Team member—as the senior finished with only nine kills paired with four errors on 28 total attacks. It was Sara Lindquist who led the Big Green in kills.

“I think our coaches did a really good job of effectively scouting her,” Kebe said. “One of our goals was to shut her down. I think we did that effectively.”

Harvard’s win was also very much a defensive effort as well. Cornelius and Bain made their presence known at the net, each recording four blocks. Tashima also recorded 10 digs in her Ivy League debut as the team’s starting libero.

—Staff writer Kurt Bullard can be reached at kurtbullard@college.harvard.edu.