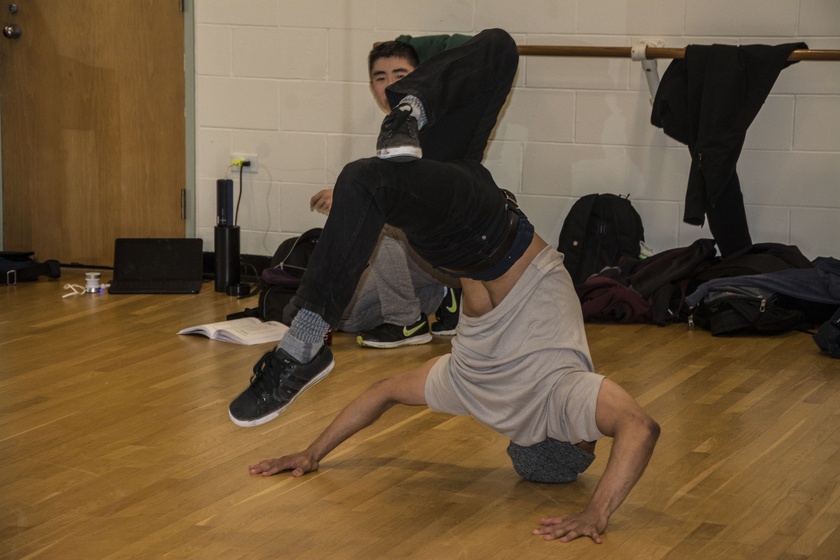 The Harvard Breakers have street dancing down to a fine art.

{shortcode-224cbc4842d69ccf6b254aa931da9978da69a39b} A few minutes before 8 p.m. on a Tuesday night, the Currier basement is a lively scene: Some people stretch, others chat, and a few try out new maneuvers. As the clock strikes Harvard time, the scene shifts before my eyes as a cypher—a ring of breakdancers—forms in the middle of the room. One by one, students enter the circle, throwing their bodies on the floor, balancing on their hands, hovering only inches above the ground. Hoots and hollers ring out as people try new tricks or nail an impressive move.

This might as well be a “Step Up” movie.

The Harvard Breakers have street dancing down to a fine art. Open to the greater community, the Breakers host practices and attend competitions in the area, allowing members to learn breakdancing and popping styles, build a campus community, and immerse themselves in Boston’s breakdancing scene. Indeed, the Breakers embrace the culture of street dance—a culture that you can’t experience stuck solely within the confines of Harvard’s gates.

Lily Lin ’16 emphasizes the importance of participating in battles off campus regularly. “You can dance on your own in practice, but that’s not what it’s about,” she says. “It’s about experiencing the culture.”

Another dancer, Ray Qian ’16, similarly appreciates the rush of these Boston excursions: “It's one thing to do a move at practice when everyone's doing their own thing and not that many people are watching, and it's something completely different try to do that move in a battle in front of a crowd and judges.”

The Breakers are a close-knit community, pushing each other to work hard and to literally push boundaries. Such camaraderie is nowhere more evident than in Qian’s comments about Lin, his teammate since his start in the club. “She's pushed me to be better at the dance these four years, and one of the reasons I always want to improve is because she's always improving,” he says.

While group members are supportive of each other’s achievements, many members lament the lack of recognition that breakdancing and popping receive as forms of artistic expression. “It’s something I think has often been overlooked,” Keehup A. Yon ’19 says. “Even here in Boston, where there are lots of competitions every week… it’s still not seen as a legitimate dance form.”

The Breakers say that this negative stigma saddens them. Members tried to petition for a club sport title from the University, a distinction that other dance groups such as the Harvard Ballroom Dance Team already have, but the Breakers have been denied thus far. The team did, however, recently recruit a coach, an addition that has made their practices more structured and productive.

Ultimately, the Breakers place chief importance on building a community—a space where dancers from all over can improve their skills and experience the culture of the art together. Qian sums it up: “We’re a goofy family of fun-loving dancers.”