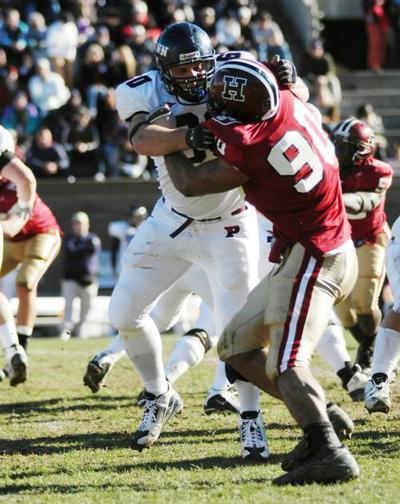 After heart surgery, defensive lineman Desmond Bryant '09 is looking to make a full comeback to the Cleveland Browns' defensive line

After four seasons playing for the Oakland Raiders, the defensive tackle finally cashed in on a solid football career on Wednesday when he signed a five-year, $34 million dollar contract with the Cleveland Browns.

"I've always had a vision, since I was a young boy, that I was going to play in the NFL,” Bryant said at his press conference on Thursday. “But I never knew what kind of numbers would be on the contract. As I got older and got into the league and saw what other people were making, it was a goal of mine to be paid like the elite player that I feel I have developed into.”

The achievement of that goal marked the culmination of a long, often obstacle-laden journey to the NFL for the defensive lineman, who experienced his share of ups and downs both at Harvard and in the pros.

After spending his first three years of high school in Middletown, Del.—where he played basketball and football—Bryant moved with his family to Elizabethtown, N.C. during his junior season. The defensive tackle graduated from East Bladen High School in 2004 following a senior year in which his team went 13-1.

After turning down scholarship offers from Duke, Florida A&M, and Towson, Bryant—with a 4.2 weighted GPA and a 1230 on the SAT—chose to attend Harvard.

“Desmond was a raw skinny kid when we recruited him,” Harvard coach Tim Murphy wrote in an e-mail. “It was a bit of a coup for us.”

“I was about 75 pounds lighter than when I came out of high school,” Bryant explained. “I feel like [switching schools] affected my recruiting as well.”

The lineman’s transition to the college game was initially a challenging one.

But the rookie soon figured it out and earned a starting job at defensive end by the middle of his freshman season for a team—led by fellow future pro Ryan Fitzpatrick ’05—that went a perfect 10-0.

But Bryant’s progress was halted when Murphy was forced to suspend the lineman for one season after his freshman year for an undisclosed violation of team rules. Murphy allowed Bryant to play the final two games of the regular season, against Penn and Yale, and then the lineman returned for his junior year, when he appeared in all 10 games.

Following that season, the psychology concentrator was forced to take another year off, this time for academic reasons.

But when he returned to campus, he was a better player than ever.

Does Harvard have a shot? Miami