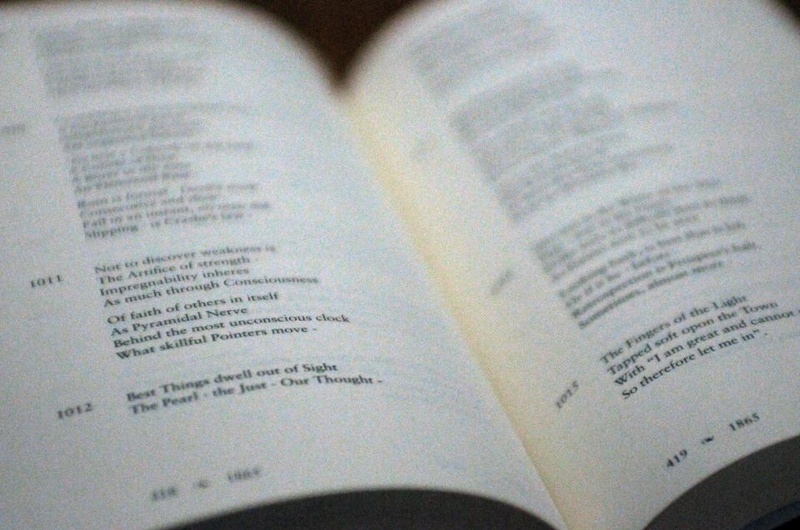 “Poetry at Harvard: A Love Story” will be presented in the Agassiz Theater on April 22. The poem to be presented is constructed from excerpts from the work of great Harvard poets.

On Sunday, April 29, poetic stylings as different as those of e. e. Cummings, Class of 1915, and Wallace Stevens, Class of 1897-1900, will meet during the event “Poetry at Harvard: A Love Story” in the Agassiz Theater. Their voices will be joined by the voices of an incredible cast of other Harvard-affiliated poets from throughout history, including Anne Sexton, Robert L. Frost, Class of 1899, T. S. Eliot, Class of 1910, and Adrienne C. Rich ’51. Under the guidance of Boylston Professor of Rhetoric and Oratory Jorie Graham, Harvard’s current community of young poets will create a single, ambitious poem entirely constructed from excepts of the works of great Harvard poets. The poem will be recited by a cast of about a dozen students, all of whom had a hand in constructing it.

Matthew A. Aucoin ’12 explains the yearning and frustration at the heart of the piece. “It’s a love story because all of these poets had tumultous relationships with poetry, with Harvard, with themselves, [and] with other people. This composite poem—if it’s about anything—is about trying to express your love for a person or a place through poetry,” he says.

Harvard College has played host to some of the world’s most brilliant poets, and this event aimed to link that poetic history to the larger narrative of Harvard’s 375th birthday, which focuses on celebrating the legacy of its students. The voices of all of the different poets that have been affiliated with the College span a massive stylistic range, which the final poem attempts to gather into a unified whole. “The poem goes all over in terms of subject matter—there are excerpts from love poems, philosophical poems, really every period and style. That’s one of the most amazing things about Harvard’s history—there’s every kind of poem in every conceivable style. We’re bringing back to life all the voices of the poets who have come before us,” one of the collaborators, Julian B. Gewirtz ’13, says.

The project began earlier in the year, when Graham and Aucoin reached out to poetry students from the college, asking them to collect excerpts from Harvard poets that were especially moving for them personally. Once the students were assembled, armed with an intimidating supply of brilliant past works, the creation of the poem itself was improvisational and deeply rooted in community. “We all started reciting kind of spontaneously. [Graham] just said ‘Go.’ Since then, a lot of people have said [that] it felt almost magical. It was an inspiring process, and it made us feel like we all had a real say in its shaping,” says Stephanie L. Newman ’13, another collaborator.

The final poem strikes its creators as thematically cohesive in a way that its disparate elements might not have initially suggested. “We didn’t have a central theme in mind, but a couple have emerged,” says Aucoin. “We have seen a lot of the poets struggling with finding someone to fall in love with. And if they can’t find someone, [they look] for a community of like-minded people to live with and to try to be happy with,” says Aucoin.

The community that past poets have struggled to find is here represented in the large cast of students who will recite the poem in rotating shifts, each saying a few excerpts in an effort to create one unfied voice out of many. The act of recitation is especially important to the students, who divorced it from performance, instead viewing the act as a kind of genuine revealing of oneself. “When you memorize a poem, it becomes a part of you internally and something that you own, in a way. It’s in your blood. The rhythm is in your blood. The conceptual part of it is in your spirit,” says Newman.

Harvard’s rich cast of historical poets will come together to present a single piece, filtered through the College’s modern community of poets. Graham and her students aim to celebrate Harvard’s poetic history as well as tap into the pure emotion and experience of poetry with their recitation. As Aucoin says, “What you really want to feel in a recitation is that the poem is the entire world in that moment.”