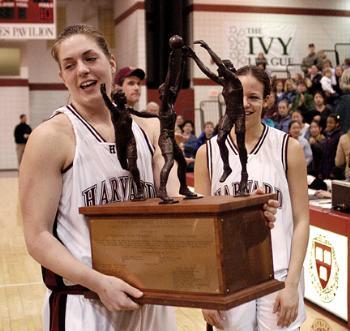 The only drawback of making the NCAA women’s basketball tournament is that a team’s chances of ending its season with a win are slim, and even narrower when one’s first-round opponent is Kansas State.

The Wildcats, seeded third and ranked seventh nationally, held all the cards, with home turf, thousands of fans and one of the best starting lineups to hit the floor this year. However, No. 14 seed Harvard’s ace popped up in the fourth quarter, in the form of timely three-pointers that ignited a Crimson rally and cut Kansas State’s 19-point lead to a mere eight with just six minutes to go.

While Harvard’s comeback gave the favored Wildcats a scare, Kansas State retained its composure and held on for the 79-69 win with accurate shooting and free throws.

“Playing in the tournament is always a lot of fun, it is so different from the regular season,” said sophomore center Reka Cserny, who led all scorers with 25 points. “There wasn’t any pressure on us and we had a great game. Of course, we made mistakes, but who doesn’t? The best thing about the whole game was to see everyone smiling after it even though we lost.”

Down the stretch, the Crimson (22-5, 14-0 Ivy) was handcuffed by the loss of Cserny to foul trouble and the absence of sophomore guard Rochelle Bell and freshman guard Jessica Holsey to injury. 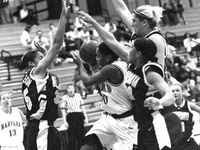 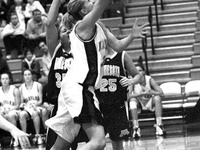 In spite of these handicaps, Harvard’s ability to challenge and play with one of the best teams in the nation demonstrates marked improvement from the squad’s 85-58 loss to UNC in the first round of the NCAA tournament last year, as well as from the Crimson’s lopsided losses to ranked opponents early this season.

“We showed both to ourselves and to everyone else that we were capable of playing with the best in the country,” said junior forward Hana Peljto, the unanimous Ivy League Player of the Year.

In previous games against elite competition, Peljto (21.3 ppg, 9.8 rpg) had been the only player to maintain high production on offense, which became painfully apparent in Harvard’s 79-40 loss to Rutgers on Dec. 21 when the Crimson, minus Peljto due to a sprained MCL, managed to score only seven points in the first half. Against the Wildcats, however, both Cserny and junior point guard Bev Moore broke into double-digits in points in addition to establishing a surprising level on dominance on the floor.

Harvard has come a long way from the pre-winter break team plagued by turnovers and poor decisions that fell to Vanderbilt, Minnesota and Boston College.

Between the early nonconference games and the battle in Kansas, Harvard, the defending league champion, boasted nothing other than perfection with a 14-0 record in Ivy contests.

“Having an undefeated Ivy League season was a goal from the start, and reaching it even after we clinched the title early was a great accomplishment for our team,” Peljto said.

Among significant individual accomplishments in Ivy competition, junior forward Tricia Tubridy stole the spotlight in posting the first triple-double in program history with 12 points, 12 rebounds and 11 assists against Brown on Feb. 7.

The Crimson clinched the Ivy crown with a victory over Cornell in conjunction with Brown’s loss to Penn on Feb. 28. However, the drama was yet to end, as a tight game against Columbia the following night almost made for an embarrassing trophy ceremony.

The Lions held the lead for all but 88 seconds of the game—58 of which were the last of the game, luckily for Harvard. The Crimson barely sealed the 78-74 win with treys and free throws in the final minute and a half of the game, fending off its biggest scare of the Ivy season. The Harvard players gathered at center court following the game and hugged in relief.

“The closeness of the game made for a better climax at the end of it,” Tubridy said. “I don’t know when the last time we hugged each other after a game was, because normally it’s in hand with two or three minutes left.”