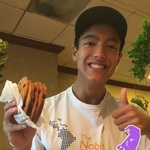 Staff writer Frank R. Civantos can be reached at frank.civantos@thecrimson.com.

Construction Is Underway, But Still No Opening Date for &pizza and Milk Bar

Square’s Andover Shop Up for Sale

The Andover Shop has been a Harvard Square staple since 1953 and a go-to formal wear shop for generations of Harvard students and Cantabrigians.

A line of customers stretched out the door of Pokeworks on Saturday for the Irvine, Calif.-based chain’s “grand opening” in Harvard Square.

​Wholesome Fresh, a casual restaurant-convenience store hybrid that started in Rhode Island, opened its doors to Harvard Square Thursday morning in the property formerly occupied by Market in the Square.

​Pokéworks, a poke fast-food chain, opened its doors in Harvard Square last week on a stormy day when many stores closed in preparation for a nor’easter.

Healthy Pharms has closed both its Harvard Square and Georgetown locations until further notice, according to a statement posted on its website.​

Hair Cuttery’s Harvard Square storefront will be snipped from its Mt. Auburn location on March 17 following an unexpected rent increase.

National chain &pizza has sought to secure the necessary approvals to open in one of several currently empty properties in the Square.

Students who stopped by said they were impressed by the store’s open decor and tasty coffee.

The Cambridge Planning Board asked Regency Centers Corporation to re-submit its proposal for a Harvard Sq. mall.

In a meeting that ultimately ended without an official recommendation, Cambridge City officials and residents debated the merits of a controversial zoning petition.

Cardullo’s Gourmet Shoppe, a Harvard Square icon since 1950, is planning to open a second location of its specialty food store in Boston’s Seaport neighborhood.

After three months on the market, Harvard Square properties housing businesses including Felipe’s Taqueria have been sold to Asana Partners for $108 million.

While some students say they’re excited by the move to Fenway Park, others expressed concern about transportation, tailgating venues, and potentially lower student attendance.