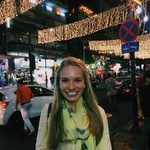 Brittany N. Ellis is an Associate News Editor for the 145th guard. She can be reached at brittany.ellis@thecrimson.com.

Harvard to Host Tailgates Near Fenway Next Year

Scalise said Harvard may still host tailgates on campus as a fallback, adding he believes tailgates closer to the park will encourage more fans to attend the Game.

As the Athletics Department takes new steps to build a more diverse staff, it faces a series of challenges that coaches, players, and administrators alike said slows progress.

​A widely-publicized incident last year at Harvard Athletics has become a subject of study for the department’s neighbors at Harvard Business School.

Some student-athletes will be stepping into a new role as part of a new marketing initiative within the Athletics Department aimed at boosting game attendance and team awareness.

The Athletics Department will create “a protocol for receiving and acting on complaints of gender inequities” and provide “conflict resolution training” for coaches and staff following a series of scandals last year.

Patrick Wales-Dinan, a track coach who was the subject of several investigations into his leadership of the women’s distance running program, will step down from his position.

Par for the Course?

High-profile scandals have pushed the normally low-profile Athletics Department into the national spotlight this year.

Members of the women's rugby team have penned letters to University President Drew G. Faust and sparked investigations into what they call an "intrinsic culture of sexism" in the Athletics Department.

​Former Harvard track coach Walter W. Johnson ’71 was arrested and charged with the possession and distribution of child pornography Thursday.

​The coaches of men’s athletic teams at Harvard make significantly more money than coaches of women’s teams, a disparity the Athletics Department is considering as part of a review of how it compensates its coaching staff.

​After a series of highly-publicized incidents, Harvard Athletics has begun working with a team of consultants to review the culture of the department’s 42 varsity programs.

As Patrick Wales-Dinan has led the women’s distance running program to new heights, he’s also been the subject of controversy and administrative investigation.

Hillary Clinton was on campus Friday as part of the “American Secretaries of State Project: Diplomacy, Negotiation, and Statecraft.”

I was A D-I Varsity Athlete for 50 Days. This Is My Story.