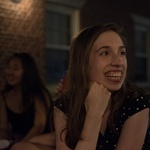 Mia C. Karr is the Associate Managing Editor for the 145th guard. She can be reached at mia.karr@thecrimson.com.

The College has not decided if the recently-affirmed undergraduate social life policy will appear in the student handbook, which is approved each May by the Faculty.

Ultimately, a proposal on advanced standing drew more argument at Tuesday’s meeting than the fate of the College’s unprecedented penalties against single-gender groups.

Thirteen Corporation members jetted into Cambridge, stepped into sleek black cars, and were chauffeured to Loeb House to vote to maintain Harvard’s penalties.

The Faculty of Arts and Sciences will likely vote on a final motion associated with the College’s controversial social group policy at their monthly meeting Tuesday.

In a stark change of pace, the Faculty Council did not discuss the College’s controversial social policy at their biweekly meeting last Wednesday.

“I have no insider knowledge of what the search committee is doing,” Smith said. “I’m sure they’re looking at lots and lots of people.”

While students will take to the polls this week to vote to extend Thanksgiving break and retain “Harvard Time,” Smith said it’s not that simple.

“This is just one phase, one piece of the larger discussion,” he said. “I think we’ll discuss issues around the policy moving forward.”

​The Faculty voted down a motion designed to nullify the College’s penalties on single-gender social groups.

In a move that could further complicate the future of Harvard’s social group policy, faculty are scheduled to vote on a motion opposing the sanctions this Tuesday—more than a year after the policy first ignited boisterous faculty debate.

Some students are launching an online campaign in an unconventional effort to promote Computer Science professor Margo I. Seltzer ’83 as a possible candidate for Harvard's presidency.