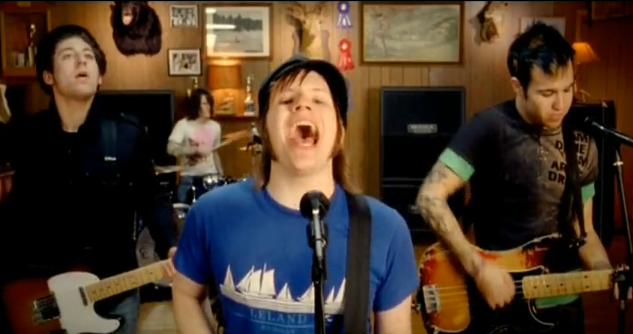 Apparently tired of extinction, Fall Out Boy is coming out with a new album, "Save Rock and Roll," and touring in a bid to win back the shattered fragments of the teenage hearts they captured so many years ago.

But before Fall Out Boy saves its genre, two emotionally overwrought Arts writers debate which of the band's earlier albums reigns supreme.

Everyone deserves a second chance. When the pop-punk sensation released its first studio album, "Take This to Your Grave," Fall Out Boy was just an okay band. I'll admit, in middle school I yowled along to "Chicago Is So Two Years Ago," but it didn't alleviate my angst. However, they rose from the ashes of their initial mediocrity and tried again. Thus "From Under the Cork Tree" was born—the sugary rollercoaster of teen-digestible wretchedness I'd been waiting for.

The most romantic song opening ever occurs on "Sophomore Slump or Comeback of the Year": "Take our tears, put them on ice / Cause I swear I'd burn the city down to show you the lights." These lines capture the magic of second-time-around Fall Out Boy—they've given in to melodrama and embraced their now-trademark blend of sociopath and fictional boyfriend. This godly amalgamation wrenched sobs from all lonely girls. When I listened to "Grave," I kept waiting for the music to relieve my (many) pre-teen feelings. On "Cork Tree," I finally understood. Fall Out Boy—at their best—is meant to make you feel worse. Much worse.

On "Cork Tree," they found their niche—clever whining that makes petty complaints sound cool and dangerous. Their true calling is making girls like me think our angst is profound while offering a loud drone of not-terrible guitar chords with which to mask the sound of our sobs from our parents in the next room. And with "Cork Tree," they nailed it.

Everyone has a band that shaped their early teens, when they were at their most emotionally vulnerable and impressionable. For everyone who had a soul, that band is Fall Out Boy. While questions of favorites are often subjective, when the subject is Fall Out Boy albums, there is one right answer and four hilariously wrong answers. To state that any Fall Out Boy record other than "Take This to Your Grave" is the band's best indicates deep character flaws and a fundamental lack of understanding of music, emotion, and humanity.

While later releases from the pop-punk quartet saw more mainstream success and showcased the sort of shimmery pop production that would earn the band many of its fans, none of these albums came close to recreating the magic of "Take This to Your Grave." "Grave" was beautiful in its straightforward sincerity, with its singularly catchy riffs and aggressively sentimental lyrics. From "Cork Tree" on, melodrama and showmanship replaced honest songwriting, and bloated production blunted the clean, classically pop-punk instrumental work.

"Take This To Your Grave" is the soundtrack to your first love, your first dance, your first heartbreak. Every social misstep and sun-soaked memory of adolescence falls into place on the tracklist. But even when isolated from any personal connection, the album stands above the rest in an empirical sense. It is Fall Out Boy at their purest and most poetic, before the lures of complicated soundboards and Timbaland lead them astray. "Grave" is the best Fall Out Boy album, and I will take that conviction to my grave.

Want to take a side? Want to argue passionately for “Infinity on High”? Let us know in the comments.

“Give Me Everything You Have: On Being Stalked”