What's Next for Women's Hockey? 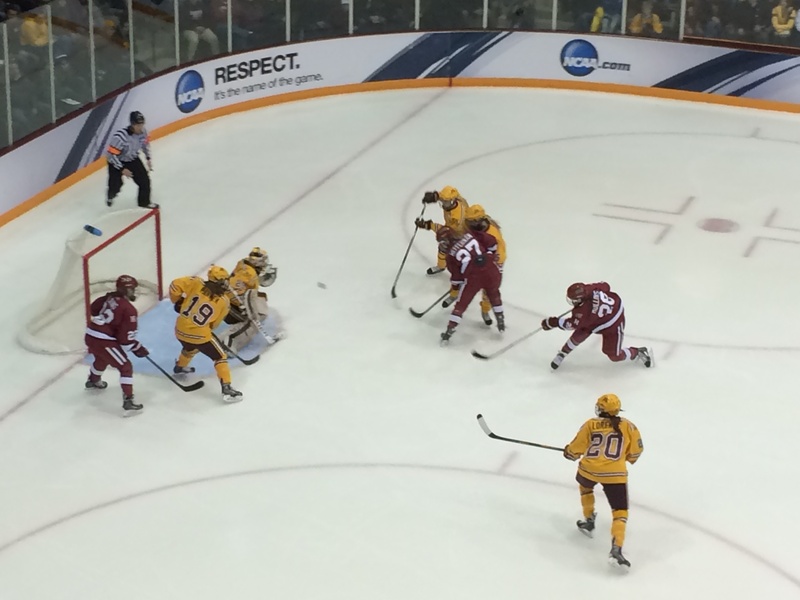 After falling just short of claiming a national championship, the Crimson women's hockey team must look forward to what appears to be a bright future.

In the series premiere of “The West Wing” (“Pilot”), President Josiah Bartlet ends the episode with a rousing speech to his core staff about a group of Cuban refugees who battled through a storm to claim asylum in Miami.

“Break’s over,” he says after a week of mishaps. They thank him and file out of the Oval Office. Standing at his desk, he bellows at his assistant, “Mrs. Landingham, what’s next?” giving rise to a phrase that will reappear time and time again throughout Aaron Sorkin and Thomas Schlamme’s television masterpiece.

“What’s next?” Bartlet asks in a flashback to early days with his campaign team after a third-place finish in the Iowa caucuses. Still unsure of all the names of these future staffers—soon to be his closest confidantes in office—he clarifies the question when they can’t quite answer to his satisfaction. “When I ask, ‘What’s next?’, it means that I’m ready to move on to other things. So, what’s next?”

Throughout the series, “what’s next” is asked by a plurality of the main characters in variety of contexts. The phrase comes to be a trope representative of the turning points, change, and evolution seen throughout Bartlet’s (yes, fictional, I know) terms in the White House.

No matter the obstacle, be it a shooting, an election, a kidnapping, a Congressional scandal, a debilitating illness (yes, these are all things you can look forward to in the series), Bartlet and his circle of quirky, mercurial, and brilliant staffers work past it. “What’s next?” There’s always something coming. Something smart. Something cunning. Something moral.

“What’s next?” is a question applicable far outside the land of Bartlet and Toby and C.J. and Sam and Josh and Leo. It’s one I asked myself after the end of the Harvard women’s ice hockey team’s loss to Minnesota, 4-1, in the title game of the NCAA tournament on Sunday afternoon in Minneapolis. It’s also the question I asked myself when head coach Katey Stone announced she’d take a leave from the team during the 2013-2014 season to coach the U.S.A. Olympic women’s hockey team. It’s the question I asked myself after a crushing double overtime loss to Yale in the first game of the ECAC tournament quarterfinals in 2014. It is, more or less, the question I regularly ask of Stone during press time after the games I cover, hovering in the lower level of the Bright-Landry Hockey Center with my recorder.

So, what is next? Well, for one, the departure of the class of 2015. Seniors Kalley Armstrong, Hillary Crowe, Sarah Edney, Lyndsey Fry, Marissa Gedman, Josephine Pucci, and Samantha Reber have suited up in Crimson for the last time. They’ve made tangible impacts upon the program and have been heavy producers for the team during their respective careers.

These graduations aren’t necessarily cause for concern. Turnover is a constant of collegiate athletics. For every star forward who departs for greener pastures, there’s a fresh-faced rookie waiting in the shadows. It’s just a matter of time. What’s next?

Sticking around is a cast of 19 other talented skaters and their decorated leader, Stone. Junior goalkeeper Emerance Maschmeyer—one of the most superlative between the pipes in the entire country—will return for a senior season. Four of the five leaders in points generated will be back, and back with a thirst at that.

This year, Stone’s 20th season at the helm of the Crimson, was nearly a storybook ending, with Beanpot, Ivy League, ECAC regular and tournament titles, and the team’s first Frozen Four appearance since 2008. The last time the team was this successful was in 2005, when Julie Chu ’07 and Sarah Vaillancourt ’09 were series regulars. Just like in 2005, perennial powerhouse Minnesota blemished the season’s finale—the NCAA title game—and left the team with a “what’s next?” moment, the proverbial cliffhanger. But here’s the thing about season finales: There’s a hiatus, a summer break, the writers regroup, guest stars are lined up, and it starts all over again.

At the close of the series finale of “The West Wing,” the next President—whose identity I won’t spoil for the sake of those who have yet to be enlightened—also asks, “What’s next?” as he begins his term in office. As the proverbial sun sets on the show, we flash to Bartlet aboard Air Force One with his wife, returning home to New Hampshire. She asks him what he’s thinking about. “Tomorrow,” he responds, simply and poetically. We are all left teary-eyed and nostalgic, wishing that Martin Sheen had actually been our President.

Fortunately, for Harvard and its women’s ice hockey team, Stone is head coach, and there’s a tomorrow—and what looks to be a bright one at that.