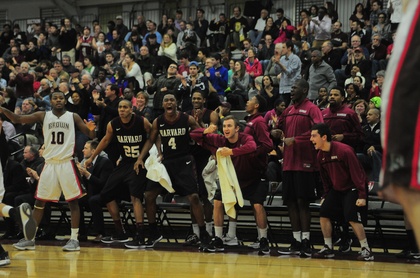 After a combined 2,400 minutes on the hardwood this season, the Harvard and Yale men’s basketball teams will take the floor of the Palestra in Philadelphia on Saturday afternoon with just 40 minutes standing between each program and the NCAA Tournament.

Per a press release from the Ivy League, the matchup will take place at 4 p.m. and will be broadcast by both ESPN3 and the American Sports Network.

After the Crimson (21-7, 11-3 Ivy) fell to the Bulldogs (22-9, 11-3) in front of a capacity Lavietes Pavilion crowd on Friday night, Harvard’s chances of dancing at a fourth consecutive March Madness were slim: a Dartmouth team entering its final game under .500 would need to beat Ancient Eight top dog Yale on Saturday in order for the Crimson’s tournament chase to remain alive.

For much of the contest in Hanover, that improbability remained. According to collegiate hoops pundit Ken Pomeroy, Yale had a 99.1 percent chance of taking down Dartmouth and thereby punching its ticket to the Big Dance late in the contest, when it was up five with less than 30 seconds to play. But March Madness has earned its moniker for a reason—and just a few minutes later, Dartmouth and Harvard were each celebrating the Big Green’s comeback victory in their respective gyms, states apart.

“Some of [our players] didn’t want to watch it,” said Crimson coach Tommy Amaker late on Saturday night. “They [had to] stand in the other room.”

Notably, this week’s Harvard-Yale rematch will mark the first Ivy League playoff game in which Princeton is not a participant—perhaps one of the strongest indicators that the royalty of the Ancient Eight has shifted in the past few seasons alone.

This year, the Bulldogs and the Crimson split their season series, with each team winning on its opponent’s home floor: while Harvard came up with a gritty, defensive 52-50 win in New Haven on Feb. 7, the Elis earned a 62-52 victory at Lavietes on Friday, taking advantage of an usually poor offensive night for the Crimson, which shot just 32.7 percent from the field and 11.8 percent from beyond the arc.

The last time the conference held a playoff game, each squad’s current seniors were still in high school. With just one game, just 40 minutes, to determine who gets to dance with the best teams in the nation in the coming weeks, all eyes will be on these two rivals programs to see which team handles what Amaker has deemed the “emotional rollercoaster” of Ivy League crunch time more fluently.

“[O]ur league is really hard and our league is really good, and I think these kinds of moments are a true testament to the strength and depth of our conference,” Amaker said. “[Yale is] a really good basketball team, and [the Dartmouth loss was] a tough night for them, but come Saturday when we have to play…they’ll be ready.”

Tickets go on sale Tuesday at 10 a.m. The Harvard athletic department has also announced that it will provide a fan bus for students who reserve their spots by Thursday free of charge.