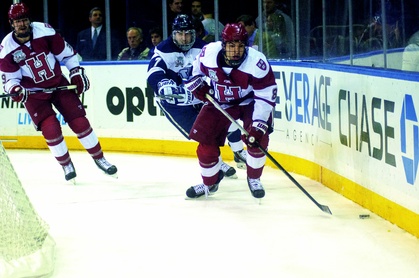 Junior defenseman Patrick McNally confirmed Thursday night that he will not play for the remainder of the regular season.

In a final stop before the first round of the Beanpot Monday, the Harvard men’s ice hockey team (12-4-2, 8-3-2 ECAC) will host defending NCAA champion Union (12-10-2, 4-7-1) at the Bright-Landry Hockey Center. With junior defenseman Patrick McNally out indefinitely, the Crimson will turn to other skaters to step up. The Dutchmen will look to build off an 8-3 win over rival Rensselaer last weekend in an inconsistent year.

Harvard currently has more questions than answers when it comes to the team’s lineup.

There is a chance that Kerfoot will return tonight against Union, and Donato is hopeful that Malone will be back soon as well. Harvard has not played a single game this season with both star sophomore centers in the lineup at the same time.

Meanwhile, the Crimson’s backline will have to step up in the absence of McNally, who is second among NCAA Division I blue liners in points per game (1.07). Sophomore defenseman Victor Newell, who struggled with injuries earlier in the season, had three assists last weekend and could be an important part of the Harvard attack going forward.

After capturing its first national championship in 2014, Union has had a rocky start to the 2014-2015 season. The Dutchmen have struggled in conference contests and are currently 10th in the ECAC.

Coach Rick Bennett’s squad lost Frozen Four MVP Shayne Gostisbehere to the pros after the team’s 7-4 win over No. 1 seed Minnesota in Philadelphia last April, yet the Dutchmen still have a number of key players from their national championship run, including junior goaltender Colin Stevens and sophomore forwards Eli Lichtenwald and Eli Pontarelli.

As The Daily Gazette’s Ken Schott reports, however, Lichtenwald and Pontarelli are battling sophomore slumps.  Lichtenwald is averaging 0.33 points per game this year, down from 0.68 the year prior, while Pontarelli’s production has similarly fallen from 0.59 to 0.24 points per game.

The Crimson raced out to a two-goal lead by 10:44 in the first period with strikes from junior forwards Jimmy Vesey and Brian Hart. But the hosts outshot Harvard in the final two frames of regulation and tied the game with an extra attacker at 19:14 in the third period with a goal from freshman forward Spencer Foo.