By the Numbers: Weekend Preview 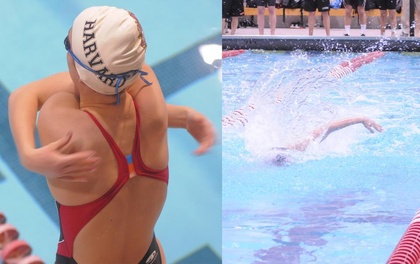 Junior Oliver Lee and freshman Kendall Crawford won all of their races this weekend, setting Harvard records and leading their respective teams to historic wins over Yale and Princeton.

While the Harvard men’s basketball team looks to clinch a share of the Ivy League title with two wins at Princeton and Penn, March Madness has already started for other Crimson winter squads. Women’s hockey hosts Dartmouth tonight for Game 1 of the ECAC quarterfinals while women’s swimming and diving has already begun its three-day defense of its Ivy League title at Princeton. In addition, men’s hockey looks to wrap-up its regular season at the Bright with contests against No. 1 Quinnipiac and Princeton while women’s basketball hopes to make some noise against the Ancient Eight’s top two teams as it hosts Princeton and Penn. Here’s a look at some of the big numbers heading into the weekend.

2003: The last year in which the Harvard men’s basketball has beaten Princeton on the road. A visiting Crimson squad defeated the Tigers, 67-61, on January 31, 2003.

1998: The last year in which the Crimson failed to advance past the first round of the ECAC tournament.

3: Number of times that freshman Kendall Crawford has lowered Harvard’s 100-yard backstroke record. She enters the Ivy League Swimming and Diving Championship Meet as the Ancient Eight’s top seed in both the 100 and 200 backstrokes.

10: Number of events at the Ivy League Championships in which Crimson swimmers hold the top seeds. The meet comprises 19 swimming events and two diving events.

0: Number of times in which the Harvard men’s hockey team has finished the regular season last in the ECAC. With two games left, the Crimson currently sits at the bottom of the conference, three points behind next-closest Colgate.

8: Ivy League Rookie of the Week nods for sophomore Temi Fagbenle. The British national teamer has also collected two Ivy League Player of the Week honors over the course of the season.