Oscar Picks: The Back Page Edition 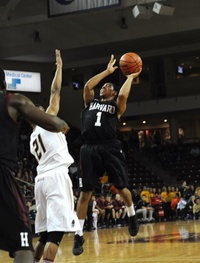 Freshman point guard Siyani Chambers has exceeded expectations in non-conference play. Now, he will get a chance to prove he can be as effective in Ivy competition.

As most of America turns its eye to Hollywood, The Back Page looks back at the year so far in Harvard sports and gives out its own Academy Awards.

Freshman point guard Siyani Chambers has been a sparkplug so far this year for the men’s basketball team. Chambers leads the team in assists and is second on the team in points. He plays nearly 38 minutes a game and has been a steadying force for the team, shooting 83 percent from the line to help it close out tough games all season.

Sophomore Amanda Sobhy helped her team complete its defense of the women’s squash national title last weekend, breezing through the tournament and dropping only one set. Sobhy has not yet lost a match while playing for the Crimson.

On a team that did its primary damage through the air, senior running back Treavor Scales was a steadying force all year for the Harvard football team. Scales rushed for six yards per carry, scoring 13 touchdowns on the year and breaking the 1,000-yard mark on his final carry of his career—a 63-yard scamper that clinched the Crimson’s victory in The Game.

Just a freshman, goaltender Emerance Maschmeyer has made a team-high 282 save this season, having started 15 of the the Harvard women’s ice hockey team’s 28 games. The rookie has been a shining asset on the squad, which will be the No. 3 seed in the upcoming ECAC tournament.

Tasked with integrating a slew of new and talented freshmen into the fold, men’s water polo coach Ted Minnis led his team to an unprecedented nine straight wins in mid-October and the team ended the season by making it to the Eastern Championships.

Down 63-41 midway through the second half against the Crimson on Feb. 2, Brown forced the Harvard men’s basketball team into overtime after a furious comeback. A late Christian Webster three was not enough in the first overtime, as Brown’s Stephen Albrecht drilled one from deep with 38 seconds left to send the game into double overtime. In the second extra period, the Crimson pulled away with 11 points, finishing with an 89-82 victory.

The only media-winning number of the selection, the award goes to the Harvard Baseball Team and its “Call Me Maybe” Internet sensation.