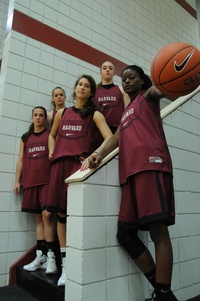 Before the London 2012 Games Great Britain’s women’s basketball team had never played in an Olympic game. After five group-stage games, the Brits exit these Olympics winless, falling 78-66 to Brazil on Saturday night and failing to advance to the quarterfinals.

Temi Fagbenle ’15, who at just 19 years old was a surprising selection for the team, averaged about 20 minutes a game for Team GB. The 6’4” forward showed signs of her impressive talent that made her a high school All-American and the highest rated recruit to come to an Ivy League team in recent years. But at times she was out-muscled by older, more experience players. In the tournament, she averaged 4.8 points, to go with 4.0 rebounds and 1.2 blocks per game.

Fabenle was forced to sit out her freshman year at Harvard due to a questionable NCAA hearing that ruled her ineligible, in part because of her decision to move from Great Britain to the United States for her last years of high school. When she eventually does take the court this winter, she and her teammates will try to break a streak of four-straight second-place finishes in the Ancient Eight.

On Tuesday, Samyr Laine ’06 of Haiti will compete in qualification in the triple jump. Mark Zuckerberg’s former freshman roommate has received attention both for his famous friend and his campaign to generate support for Haitian athletics. Should Laine qualify, his final will be on Thursday. Alex Meyer ’10, the only other Harvard Olympian yet to compete, swims in the men’s 10K open water swim on Friday.