Leblanc Doesn't Want Lin To Have All the Fun 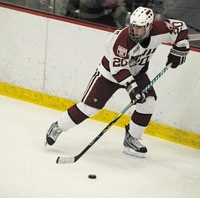 In his first four games back in the NHL, former Crimson hockey player Louis Leblanc has tallied two points on a goal and an assist.

While most of Crimson Nation is going “Linsane” over its newest basketball-star-turned-pop-culture-juggernaut, Harvard alums elsewhere in the pros are getting it done as well.

Former Harvard hockey player Louis Leblanc is back in action with the Montreal Canadiens after spending the month of January in the American Hockey League.

And in the first four games since his return, Leblanc is starting to turn heads.

After providing an assist in a Feb. 2 loss to the New Jersey Devils, the former Crimson standout opened the scoring in a 3-2 shootout win against the Pittsburgh Penguins.

After teammate Andrei Kostitsyn deflected a pass into the Penguins’ half, Leblanc beat the Pittsburgh defense to the puck and fired a shot past Marc-Andre Fleury.

With over 15 minutes of ice time, including some time on the power-play line, it appears as though Leblanc might have earned himself a spot on the Canadien team for the remainder of the season.

And while no one is chanting "MVP" when he passes the puck, with any luck, the Crimson faithful will find another object of sports obsession.