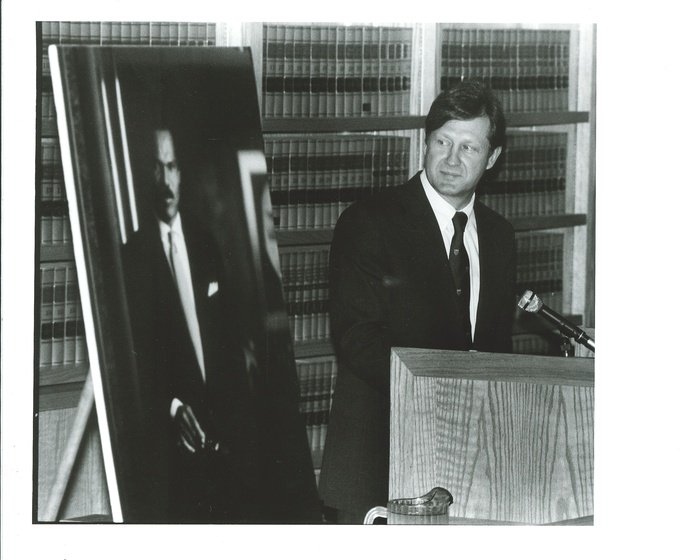 A Spring of Discontent

But before local school board members started contending with critical race theory, critical legal studies was fanning a flame that would spark one of the most tense periods in the history of Harvard Law School.

“Do you agree with this book that is being taught with kids that babies are racist?” Ted Cruz infamously asked his fellow Harvard Law School alum, Justice Ketanji Brown Jackson ’92, during her recent Senate confirmation hearing for a seat on the Supreme Court. His question represents the latest iteration of a contentious debate over race relations in America — critical race theory.

But before local school board members started contending with critical race theory, critical legal studies was fanning a flame that would spark one of the most tense periods in the history of Harvard Law School.

Critical legal studies is a theory developed in the 1970s by leading legal scholars, including Harvard Law Professor Duncan Kennedy ’64. CLS gained traction until it formed a schism in legal scholarship in the early ’90s. Its core sentiment explores how the law is inherently biased and used as an instrument by those in power to uphold systems of oppression against marginalized groups. Many CLS scholars seek to use the law as a tool to correct society’s injustices.

At the time of its conception, CLS was highly controversial and dismissed as promoting radical leftist ideals. But Kennedy disagreed, quoted in a 1985 Crimson article arguing that “there are many places where you can struggle effectively against social injustice. That includes influential, elite institutions like Harvard Law School.” He believed that by offering a creative, radical perspective at the Law School, he could expand the range of choices leftward, thereby pulling moderates slightly to the left.

Eventually, the growing popularity of CLS created a fierce divide between the Law School faculty, some of whom believed the theory was necessary, while others, like the head of Duke University’s School of Law and Harvard Law alumnus Paul D. Carrington, believed it was “often avowedly destructive in its purpose.” Professors would spend half of their lectures criticizing their own peers. Scathing articles back and forth routinely appeared in legal journals, alternately condemning and defending the legitimacy of CLS.

The debate came to a head in the spring of 1992, when HLS announced its new faculty hires.

With tensions at an all-time high, Robert C. Clark, the Law School’s dean at the time, was tasked with appeasing an unusually impassioned faculty. Clark selected what he considered “a politically balanced package” — four white men across the ideological spectrum.

The massive outrage that followed made clear that Clark’s plan had backfired miserably.

At the time, out of 64 tenured or tenure-track professors, a mere six were Black men, and five were white women. On top of that, two of the newly tenured faculty were only visiting professors, a disqualifying factor that had caused two Black women to be denied tenure the year prior.

This striking lack of diversity at the Law School had been a cause of concern for several years — especially for the Coalition for Civil Rights, a group of six minority student organizations and the Women’s Law Association dedicated to increased minority hiring practices. Two years before the hiring controversy, they attempted to file a lawsuit against Harvard Law School for discrimination, but the Massachusetts Supreme Court dismissed their case after hearing Harvard’s argument that students didn’t have the right to sue their school. After a strenuous legal battle, however, the coalition was finally able to give verbal arguments on March 3, 1992.

Around the same time, Professor Derrick A. Bell Jr. announced that he had requested another year of unpaid leave from the Law School. He originally went on leave in April 1990 in protest, refusing to return until a Black woman joined the faculty. But the University’s President at the time, Neil L. Rudenstine, said Bell’s request could not be granted.

Then on March 4, 1992, a group of students from the CCR camped outside of Clark’s house and waited for him to leave for work. As he made his way outside, they handed him a list of demands with an eight-day ultimatum period for a comprehensive response.

The eight days crawled by as the entire Law School anxiously awaited Dean Clark’s response. To their dismay, the reveal was underwhelming.

In response, CCR staged two silent sit-ins, one on March 18 in the office of Professor Charles A. Fried and the other on March 19 in the office of Professor Reiner H. Kraakman. Both were avidly anti-CLS, and, the students believed, were complicit in the lack of minority hiring at the Law School. The sit-ins consisted of around 15 or 16 students and lasted approximately 15 minutes before protestors left at the threat of disciplinary action.

“We are picketing Griswold Hall because a lot of the professors have their offices here,” said Julia R. Gordon ’85, one of the protest’s organizers, in a Crimson article from April 4. “I have never done this before. Then again, I have never been treated with such disrespect in my life.”

But most professors ignored the morning picket line and entered their offices despite the chanting crowd.

Later that same afternoon, around 30 coalition members held a silent vigil outside a faculty meeting in Pound Hall, distributing flyers saying 330 students voted that they had “no confidence” in Clark’s commitment to minority hiring. “Most faculty entering the afternoon meeting said the vigil was a productive method of raising awareness,” according to the April 4 Crimson article.

After these relatively mild demonstrations, the CCR kicked things up a notch. For their final demonstration in this spring of discontent, nine student members staged a sit-in in front of Clark’s office. After arriving in the afternoon of April 6, the demonstrators refused to leave until Clark either satisfied their demands or called for their arrest. They sat in silence for approximately 25 hours, with their faces obscured by masks depicting Clark’s face to preserve their anonymity.

“We feel the dean and the faculty have to know how serious we are about diversifying faculty,” said first-year law student Gregory E. Bylinsky told the Crimson at the time. “There isn’t time to wait anymore.”

“We want to make the dean take some kind of action and stop negotiating in bad faith with the diversity movement,” he added.

Harvard Law School had not seen this much outcry from the student body in at least a decade. “This has escalated beyond any previous protest,” said second-year Katya Komisaruk in the same Crimson article. “This is the first time people have been committed to being arrested. The provocation and comment by the dean has caused the crescendo.”

But Clark said he saw the sit-in as part of the annual spring protests. “It’s not radically different from my first spring here,” he said.

On April 16, nine student organizations at Harvard Law called for Clark’s resignation. They had enough of what they perceived to be blatant discrimination toward minorities and women and general indifference toward student concerns.

Nevertheless, Clark remained in the position until retiring on his own accord in 2002.