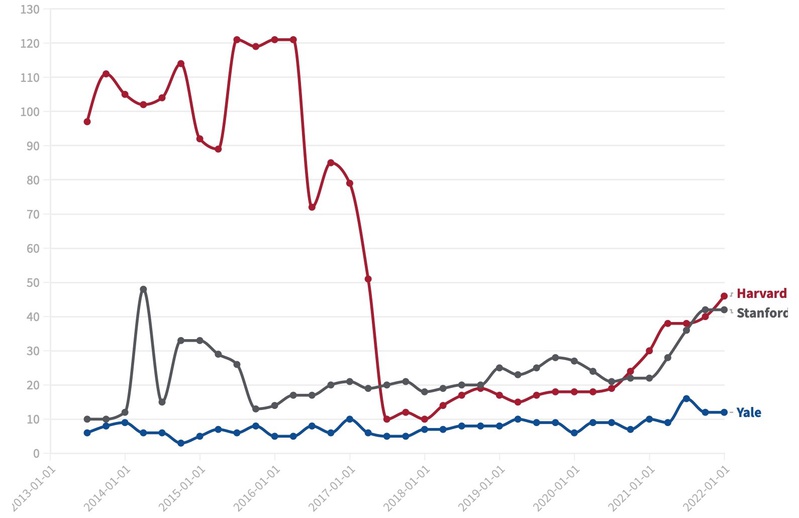 The number of stocks in the Harvard endowment has slowly crept back up in recent years after the Harvard Management Company sold off the vast majority of its public holdings when N.P. “Narv” Narvekar took over as its CEO.

When Narvekar arrived at HMC — which manages Harvard’s investments — in December 2016, the University’s endowment directly owned 79 public securities, making up roughly 2 percent of its total portfolio. The school sold off most of its stocks over the following year, bringing the total number of public holdings in the endowment down to just 10 by December 2017, when they made up 0.3 percent of the endowment’s total.

But following the initial sell-off, the endowment has begun to invest in the public market more, according to a Crimson analysis. As of December 2021, HMC directly owned 46 stocks, again making up just over 2 percent of the endowment.

Narvekar took over as head of the endowment as Harvard’s returns were severely lagging behind peer schools. He instituted a five-year restructuring plan that sought to wind down HMC’s “hybrid” investment model, under which it retained a large in-house investment team while hiring external managers to oversee investments.

At the start of Narvekar’s five-year plan, HMC laid off roughly half of its staff. The restructuring plan ended early, in 2020.

HMC is required to disclose its direct public holdings to the U.S. Security and Exchange Commission each quarter because it controls over $100 million in assets. The overwhelming majority of the endowment, though, is invested through third-parties and not disclosed publicly.

HMC is not alone in investing much of its money through third-party asset managers. Yale’s endowment — the second largest in the country, behind Harvard — directly held just 12 securities as of its latest public filing. Stanford’s endowment invested directly in 42 public holdings at the end of last year.

Aaron S. Yoon, an accounting professor at Northwestern University, said he believes HMC is “narrowing down their focus” following Narvekar’s round of initial layoffs.

“The growth in active management has [made] it much, much harder for endowments to hire and retain talent internally,” Viceira said. “That talent has been progressively leaving.”

The proportion of Yale’s endowment that is directly invested in the public market has largely been below Harvard’s. Over the last nine years, Yale’s direct public holdings have frequently made up less than 1 percent of its endowment overall.

The composition of HMC’s direct holdings also differs significantly from those of Yale and Stanford.

HMC’s direct public investments have largely been in the technology and biopharmaceutical industries, including household names such as Meta Platforms — formerly known as Facebook — and Google’s parent company, Alphabet.

Yale and Stanford, however, invest heavily in exchange-traded funds, or ETFs, which are managed funds composed of many different securities. Throughout Narvekar’s tenure, however, ETFs have consistently made up only a small portion of the Harvard endowment’s direct public holdings.

Similarly, Stanford’s top two securities, which are ETFs specializing in emerging markets, make up almost half of its public holdings.

John M. Longo, a professor at Rutgers Business School and the chief investment officer of Beacon Trust, wrote in an email that most ETFs are “passive in nature,” meaning they are unlikely to outperform the market.

Yoon, the Northwestern professor, said the current composition of HMC’s direct investments show the company is “confident that they can do stock picks and they know who the winners are.”

—Staff writer Dekyi T. Tsotsong can be reached at dekyi.tsotsong@thecrimson.com.

—Staff writer Eric Yan can be reached at eric.yan@thecrimson.com.