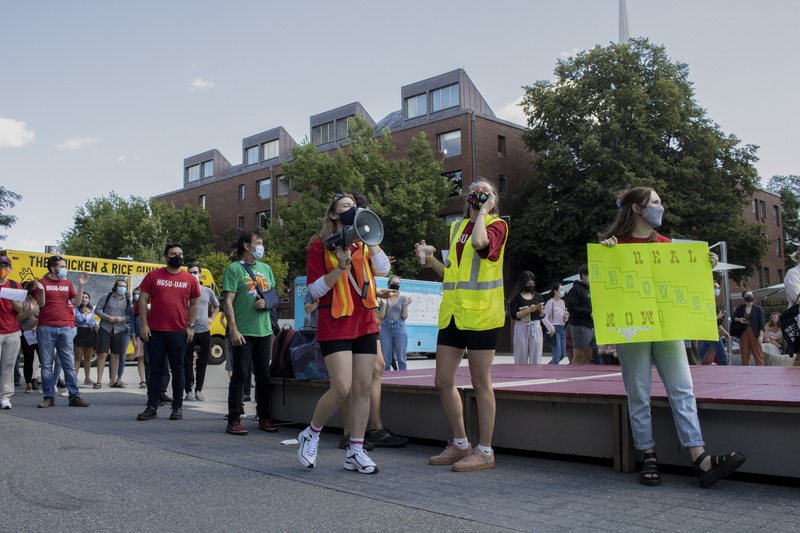 Members of the Harvard Graduate Student Union lead a rally in front of the Science Center on Friday afternoon.

The Phillips Brooks House Association’s Student Labor Action Movement held a teach-in to mobilize undergraduate students to stand with unions on labor issues across campus Saturday on the steps of Memorial Church.

Members from the dining services employees union UNITE HERE Local 26, Harvard Graduate Students Union-United Automobile Workers, and Harvard Union of Clerical and Technical Workers spoke about their respective issues at the teach-in. All three unions are currently in contract negotiations with the University.

The teach-in took place one day after the graduate students union’s “Rally for Real Recourse” demanding third-party arbitration of cases of identity-based discrimination and harassment. SLAM organizer William M. Sutton ’23 began the teach-in, urging undergraduates to participate in the efforts of different unions across campus.

“What’s important right now is that [we] as undergraduates begin organizing, that we get to wake up to the importance of labor issues,” he said. “So that when the next time comes to send an email, attend the rally, or walk the picket line, we’re there shoulder-to-shoulder with the workers who make this campus run.”

SLAM introduced Local 26 members Hakim Akendar, a pantry steward at Winthrop, and Dee Ross-Burton to speak about the importance of preserving hours for employees.

“I believe we are a part of the community,” Akendar said. “I believe we should be able to provide for our family and have dignity.”

Local 26 initiated a flyer campaign as undergraduates moved into their dorms last month following the preliminary schedule changes shared by the University for the 2022-2023 academic year. The union had calculated the schedule changes would result in a 20 percent cut in the number of full-time residential house positions and an 8 percent cut in total hours for dining employees.

HGSU-UAW Bargaining Committee member Aparna Gopalan spoke about the graduate students union’s demands at the bargaining table, asking how many people in the audience have teaching fellows or assistants.

“Each and every one of you are critical to the strike effort, because you need to talk to your TFs and TAs and see how they’re doing,” she said. “Are they able to make rent? Are they getting harassed? Do they have protections against that?”

She urged undergraduate students to join the picket line with their teaching fellows and assistants.

In August, HGSU-UAW announced it would hold a strike authorization vote beginning Sept. 13 after five months at the bargaining table for its second contract with Harvard. The union and the University have not reached agreements on compensation, benefits, harassment and discrimination resolution processes, and union security.

Genevieve Butler, HUCTW member and Sociology faculty assistant, delivered a brief speech to the group at the end of the teach-in about efforts across unions to obtain residency for recipients of DACA and TPS.

“As a residential college, we feel like these are really important issues that affect our community,” she said.

Harvard spokesperson Jonathan L. Swain declined to comment on the statements made at the teach-in.

According to Sutton, the purpose of the teach-in was to inform undergraduate students about their “stake” in union-related issues on campus.

“We, as SLAM, like to follow what the workers want,” he said in an interview after the teach-in. “We never try to speak for them or do anything that would be at odds with their objectives as unions.”

Abrar J. Trabulsi ’23 said she came to the teach-in after seeing flyers around campus. In the event of a dining employees strike, she said, she would support them.

“A lot of them have dedicated 10, 20, 30, even 40 years of their lives to this place and to the students, and they deserve to be treated as human beings and treated with dignity,” she said.

Ezra H. Lebovitz ’23, a SLAM organizer, said students should be aware of the way Harvard’s employees help run many aspects of campus life that students often take for granted.

“I think that being cognizant of the ways that labor makes possible all of the functions and best parts of Harvard really transforms the way you approach your day-to-day and also allows you to support your fellow human beings and the people who are in and around your life,” he said.