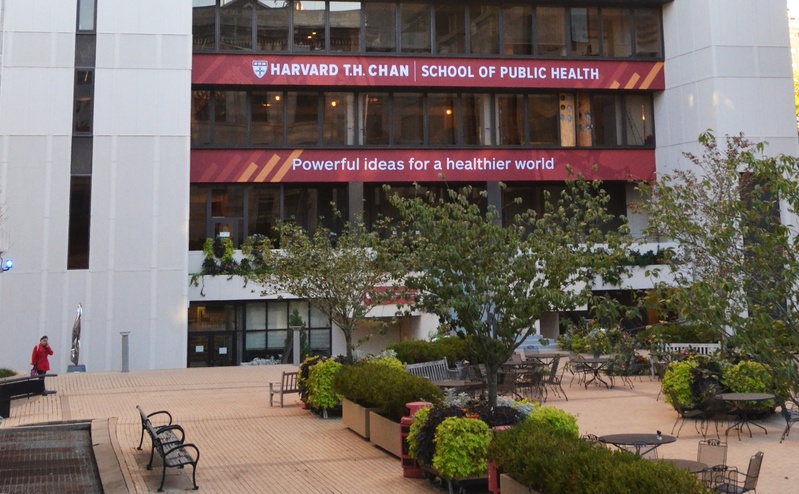 The T.H. Chan School of Public Health, pictured here in October, was renamed January this year following a $350 million gift.

This year’s IAW included webinars titled “Healthcare Injustices in Palestine and the COVID-19 Pandemic” and “Palestine and the Progressive Agenda,” and featured panelists including Swarthmore College associate professor Sa’ed A. Atshan and Palestinian activist Yamila Hussein-Shannan.

Harvard’s Palestine Solidarity Committee is an undergraduate organization “dedicated to supporting the Palestinian struggle for self-determination, justice, and equality through raising awareness, advocacy, and non-violent resistance,” per its website.

Asmer Safi ’23-’24, a member of the group, wrote in an emailed statement that this year’s virtual IAW marked a “vital continuation” of the committee’s advocacy on campus prior to the Covid-19 pandemic.

“Although the pandemic makes it difficult to be engaged with the causes that students were engaged with on campus, the social and economic impact of COVID-19 makes it more important than ever to advocate for marginalized communities across the world,” Safi wrote.

In 2019, IAW drew criticism from some Harvard affiliates who disapproved of the Palestine Solidarity Committee’s framing of the Israel-Palestine conflict.

IAW did not take place in 2020 due to the emerging global health crisis.

Safi wrote the Palestine Solidarity Committee “sees it as a central mission to make clear that its fight against Israel’s systemic, state-sponsored discrimination and apartheid policies not be conflated with anti-semitism.”

“Throughout IAW, PSC actively stood against any anti-semitic sentiment and made it a core part of its programming throughout the week to link the struggle for Palestinian rights with the struggle against anti-semitism,” Safi wrote.

IAW attendee Shraddha Joshi ’24 said her involvement with the Palestine Solidarity Committee and academic interest in Palestine motivated her to attend three of last week’s events.

“If I’m studying the language and the culture that’s different from mine it’s so important to be educating myself,” she said. “IAW events were just a space to educate myself, to hear from some really incredible speakers who I’ve read from before but haven’t really had the opportunity to hear from in person.”

Joshi said she enjoyed last Monday’s event, “Divestment as a Historical Tool for Justice,” which she said focused on boycott and divestment.

“The idea of divestment and boycotting is something that we can do as consumers and as citizens, so I think it really helps to put in perspective how we can ethically engage with issues that are not just limited to Palestine,” she said. “Then also, how we as Harvard students can pressure our university or support efforts in our university to be more mindful of social justice.”

A previous version of this article incorrectly stated that Harvard professor Cornel R. West '74 spoke during an IAW webinar last week. In fact, he was scheduled to speak but was ultimately unable to attend.