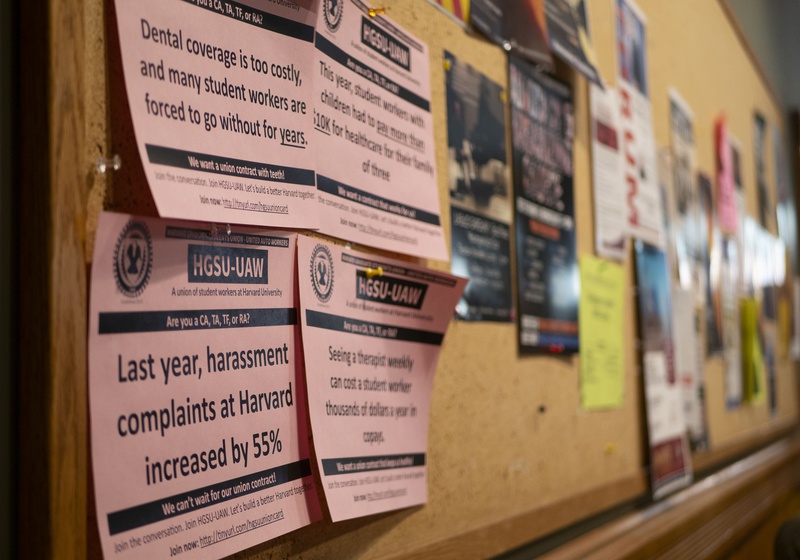 On Tuesday, the Harvard Graduate Students Union announced it would hold a strike authorization vote next week.

Fifteen months after its own strike, the Harvard Graduate Student Union-United Automobile Workers has thrown its support behind another student strike — this time, at Columbia University.

Student workers at Harvard said they have taken to social media, donated to a strike fund, and picketed — both virtually and in-person — as the Graduate Workers of Columbia-United Automobile Workers went on strike Monday.

Ege Yumusak ’16, a member of HGSU-UAW, also sent a union-wide email in support of the GWC-UAW, which began its strike after two years of bargaining without a contract.

“Text your friends at Columbia, follow them and tweet in support, tell them that we are one union (#1u) in solidarity, because we’re counting on them to win a strong contract,” she wrote. “As student workers, we must support each other in order to push our movement forward.” 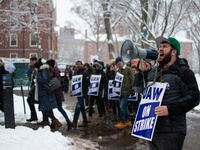 In 2015, GWC-UAW submitted its petition to unionize to the National Labor Relations Board, which adjusticates labor disputes brought by unions or individual employees. A ruling in their favor in 2016 declared that graduate students at private universities are employees and have the right to unionize.

“The Columbia 2016 NLRB decision, in particular, paved the way for contract victories in higher ed — including ours,” he wrote. “It's about time Columbia student workers also won a contract.”

The union and Columbia continue to disagree on five points — union recognition, union shop, grievance and arbitration procedure for harassment and discrimination, protections for international student workers, and compensation and health benefits.

A spokesperson for Columbia University wrote that they are “committed” to a “full and fair contract,” and “remain confident of that outcome, notwithstanding this unnecessary and unfortunate work stoppage.”

On March 10, GWC-UAW notified its membership that Columbia University will not pay striking workers and demanded strikers repay part of their financial aid stipends. In response, Columbia undergraduate students organized a strike fund to help support strikers. The fund has raised over $60,000 thus far.

On the first day of the strike, both students and local politicians joined the union on the picket line, according to Susannah E. Glickman, an organizer with the GWC-UAW.

“It’s really exciting to see the energy,” she said. “It's awesome to see everyone coming out to support us.”

Yumusak was one of those supporters. Traveling to the picket line, she said she was “very proud” of Columbia’s graduate students.

“They are out there in the cold, doing Covid-safe picketing,” she said. “Some of them can’t get to the picket line, so they’re doing virtual picketing. It’s really amazing. This is the frontier of digital organizing, digital labor action, as well as in-person labor action.”

For their virtual picketing session, the union urged participants to call and email Columbia administrators. The online effort also featured a teach-in by professors and students studying social movements and labor.

“We definitely looked to the example of Harvard when it went on strike and Michigan, who went on strike during the pandemic, as models,” Glickman said.

Andrew M. Leber, a steward for HGSU-UAW, said that members of HGSU-UAW have been “in touch” with members of GWC-UAW for “quite some time,” since the movements at both schools have been “proceeding in a rough parallel for some time now.”

Besides resorting to strikes after months at the negotiation table, Leber noted that both unions have tried and failed to incorporate third party arbitration of identity-based harassment claims into their contracts.

Leber said he has donated to the strike fund and plans on circulating information to fellow Harvard graduate students on how to assist the Columbia strikers.

“Given that there are relatively few private university student worker unions, what happens to any one of us or any one unionization effort has implications for all of us,” he said.

Erik Baker, another HGSU-UAW member, said he has also donated to the strike fund and promoted the strike on social media. He recalled receiving support from other unions, including the GWC-UAW, when he was on strike.

“I think that a lot of people feel like we got an outpouring of support from other grad unions including Columbia GWC at the time, so now it’s our turn to return the favor,” Baker said. “In our case, our strike really helped ultimately bring us to a resolution a few months afterwards, and I certainly hope for the same outcome here.”