Portrait of an Artist: PYNKIE 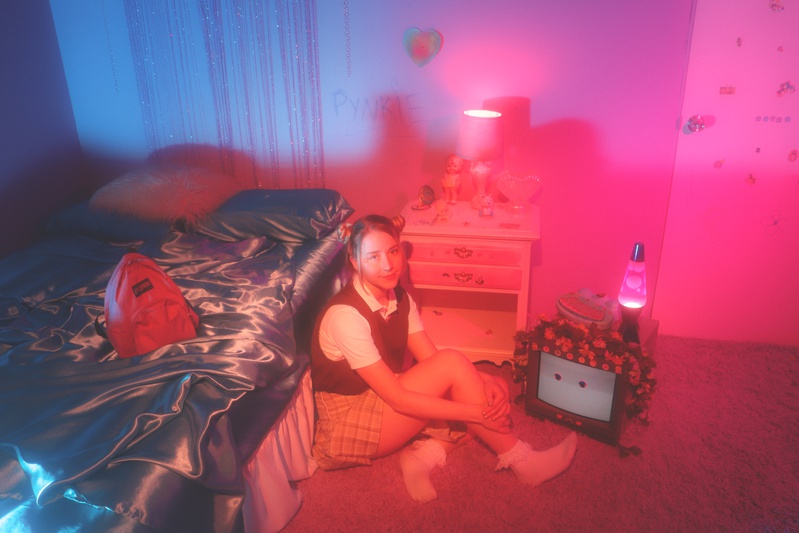 When Lindsey Radice isn’t working 12 hour days as a nurse, she’s writing music as PYNKIE — an indie rocker known for her signature starry-eyed sound. From March to June, Radice was on the front lines of the pandemic response in New Jersey while simultaneously working on her latest album “#37.” The album is Radice’s second as PYNKIE and is inspired by ‘90s alternative. The Harvard Crimson spoke with Radice about her new album, working as a nurse during COVID-19, and the artists that most excite her.

The Harvard Crimson: In addition to making music, you're also a nurse. I'm sure that life has been pretty crazy for you this year. How have you been doing?

Lindsey Radice: It was crazy for like two months, maybe three months, a little bit of March, April, May, some of June. My unit that I usually work for is called ortho/neuro, and it's for people after certain surgeries like, hip, knee, spine, brain, sometimes. Bone and nervous system stuff. So when COVID started, we had to convert my unit into an extension of the ICU. I'm not ICU-certified, so I didn't work there.

It was crazy. It was different then what I'm used to, and we had to wear all this crazy equipment. And you know, it felt risky and harder. One of my patients died. A lot of them had to be rushed off the unit to the ICU because the oxygen levels just randomly dropped so low that it was an emergency. It was unpredictable. But yeah, that's it really. Now it's back to normal since like, June-ish. We went back to our unit. But you know, business as usual.

THC: When you're not at work, what has your quarantine routine been like?

LR: Quarantine is cool because a lot of times I'm a social butterfly, and I go out a lot. Like, hang out with people. And that's not really too great for creativity. That's why it takes me so long. So during quarantine, I couldn't really go out so much and couldn't really see people. Being shut inside, I could make demos and it gave me more time to create until I started making stuff with my boyfriend who I was staying with and am living with. We started making stuff together, separate from my PYNKIE stuff. He calls himself Social Media. But anyway, so yeah, we were making stuff together. I was coming up with some demo ideas or whatever comes next with PYNKIE. It was just a good time to be able to sit down.

THC: Besides having more time to record and stuff, how did you feel like quarantine affected your songwriting?

LR: I get more inspired when things around me are different or weird. Or if I go to a new place, new people — things like that always inspired me to want to make a song. So even if I don't make things about COVID or about quarantine, it's like that weird situation is inspiring.

LR: Yeah, that's something I've been working on since, like, 2019. I've been working on it for a while, but it was delayed by quarantine and by a lot of other things. So I started things over a lot with the album, and I scrapped a lot of things I didn't like. But yeah, I didn't make any of those songs during quarantine. That's all whatever comes next.

THC: So, it's called #37. Could you speak on the significance of the title?

LR: Yeah, so it's because of my mom's first husband. She's married a couple times, but her first husband was before I was born when she had my two older sisters. He died. And they were really young, like 19, early 20s — they got married after high school. His high school football number was 37. Her and my sisters, my two older sisters, would find the number and see it everywhere. And it just rubbed off on me. Especially when I was making the album, I would see it. That's why I like it.

THC: Musically, could you speak on the inspirations that influenced this project? Like who you've been listening to that inspired you?

LR: Yeah, I don't really think of other artists when I'm making songs. That's not how I get inspired, usually, but subconsciously, definitely. I hear some things happening because I listened to a lot of Liz Phair. And I also listen to Soccer Mommy. I like alternative '90s stuff — I listen to Sonic Youth. One of my favorite albums is a song called “Copacetic” by Velocity Girl. It's just a weird album that probably not a lot of people know about, but it was on Sub Pop Records back in the '90s. It was so good.

THC: Who would be your dream collaborator? If you could work with anyone?

LR: I would die if I worked with Liz Phair. Or Soccer Mommy. Yeah, and Okay Kaya who I just spoke about I would absolutely love to even just talk to her. Those are the first ones that come to mind.

THC: What’s next for PYNKIE? Another solo project after this album?

LR: I want to do a new album, obviously, but I take forever to finish things. I think it'll be more of a different kind of feel, like maybe not real drums, but maybe a drum beat with like, acoustic guitar and weirdness. And, I don't know, maybe a more stripped-down feel back to my roots kind of thing. I definitely plan on another album in the next year hopefully.

Twice Surprise with New Single ‘Cry for Me’

It’s easy for students and faculty alike to feel like they’re just going through the motions of online school. But, it’s even easier to make your virtual learning experience more engaging this semester with MindMeister. Take your notes to the next level with MindMeister's award-winning mind mapping tool.

As many as two million college applicants nationwide will spend the winter polishing that most important and feared component: college application essays. Due to Covid-19, essays are more important this year than ever. Many applicants haven't been able to sit for standardized tests like the SAT, which now places an even greater emphasis on grades and essays during this admissions cycle.

From one Harvard student to another, don’t miss out on these amazing opportunities!