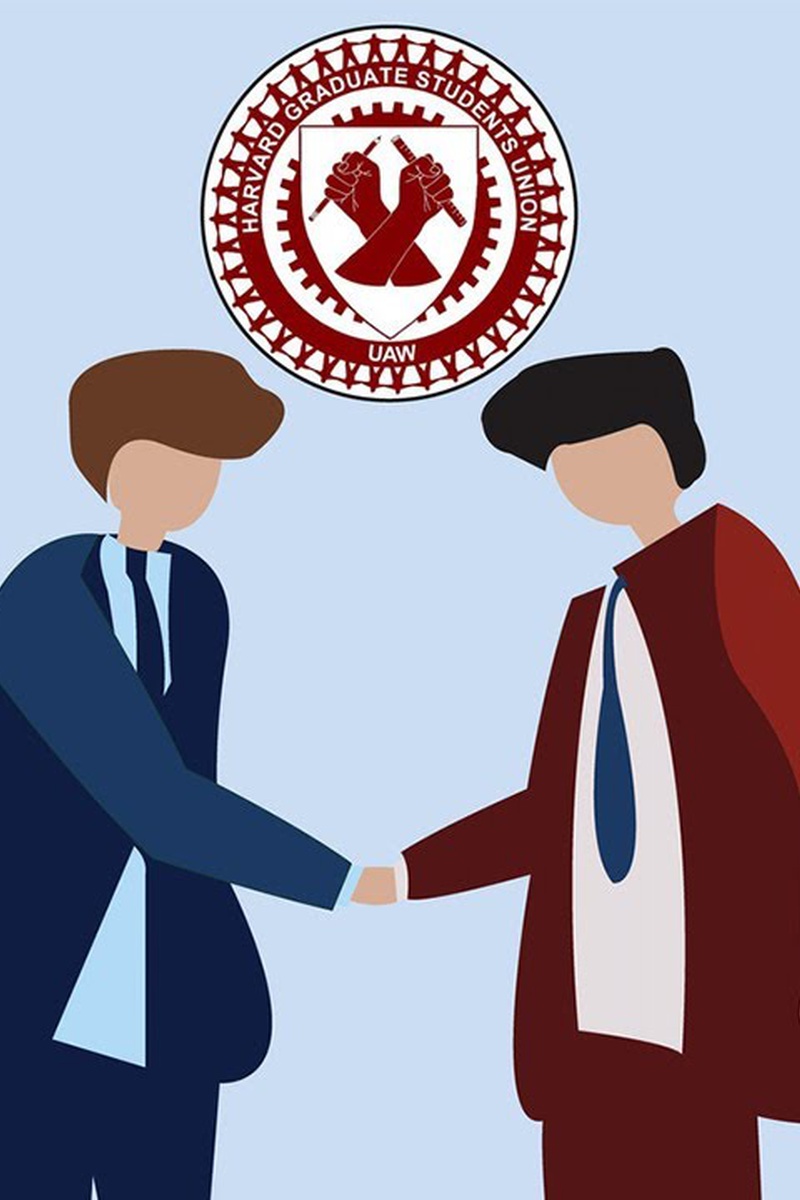 In 2016, the National Labor Relations Board — under a Democratic majority — ruled in a landmark case that graduate students at private universities have the right to unionize.

That decision opened the door to Harvard graduate students who had long pushed for unionization. In 2018, the NLRB officially certified Harvard Graduate Students Union-United Auto Workers — the first student union in Harvard’s history — and the University officially recognized HGSU-UAW.

But within the year, President Donald J. Trump succeeded in installing a Republican majority on the NLRB, leaving HGSU-UAW in a precarious position just as negotiations for its first contract with the University began to ramp up.

Following the new appointments, the NLRB proposed a controversial rule that would overturn the 2016 landmark decision. Graduate student unions nationwide, many still in their nascent stages, feared bringing labor disputes to the NLRB because they worried the Board would use the opportunity to undermine their right to organize.

With the Trump majority in the NLRB, HGSU-UAW President Brandon J. Mancilla said it has been more difficult to ensure Harvard bargains in good faith and adheres to fair labor practices. Last year, the union accused the University of “hiding behind the Trump administration” during negotiations.

Following the mold of the Obama-Biden administration, Biden plans to restore a pro-labor NLRB “to fulfill its intended purpose of protecting workers” through appointments and to support collective bargaining, according to his campaign website.

University spokesperson Jason A. Newton declined to comment for this story.

University of Oregon professor Gordon Lafer, who formerly served as a senior labor policy advisor for the U.S. House of Representatives Committee on Education and Labor, wrote in an email that, by the end of 2021, he expects Biden will be able to restore a Democratic majority on the NLRB. This could have significant effects on Harvard’s relationship with HGSU-UAW.

“This means that Harvard will be legally compelled to negotiate in good faith with the union,” Lafer wrote. “That will bring a lot more pressure to bear to negotiate a fair contract, including a neutral grievance procedure, and it will be illegal for the university to engage in regressive bargaining.”

The NLRB governs labor practices in the U.S. through two channels: adjudication in labor disputes brought by unions or individual employees and proactive rulemaking. According to William A. Herbert, executive director of the National Center for the Study of Collective Bargaining in Higher Education and the Professions at Hunter College, City University of New York, the Board has historically relied almost exclusively on the former for major changes, including employee classification.

The existence of Harvard’s graduate student union hinges on the Board’s ruling in Columbia University, a 3-1 decision in August 2016 that declared graduate students at private universities are employees and have the right to unionize.

According to Herbert’s research, students from 19 private universities redoubled unionization efforts after the 2016 decision. Five student unions, including Harvard, successfully negotiated a first contract, with Columbia’s union currently in negotiations.

But in 2019, the NLRB published a Notice of Proposed Rulemaking threatening the Columbia decision. If adopted, the rule will deny recognition for graduate students at private universities as employees and thereby halt unionization efforts.

Herbert explained that the proposed rule would break with NLRB precedent.

“Their proposed rule would be the first time in American history in which rules are being utilized to eliminate a class of people from coverage,” Herbert said.

‘The Worst National Labor Relations Board’

The NLRB currently consists of four sitting members — all appointed by Trump — with one seat vacant. One appointee, Lauren M. McFerran, was originally appointed by President Barack H. Obama. The General Counsel, Peter B. Robb, is another Trump appointee.

While Ring stated at the time that the proposed rule is intended to “bring stability to this important area of federal labor law,” some experts and graduate student organizers such as former NLRB Chairman William B. Gould IV have said it is a deliberate attempt to strip graduate student workers of their rights.

The political leanings of Trump NLRB appointees have made many graduate student organizers wary, suspecting the Board would use any new case to overturn the Columbia decision. Many feared that — with the Republican majority — universities would bring the cases union requests to the NLRB, which would then overturn Columbia.

“These schools withdrew their campaigns in order to avoid sending a case to the NLRB that they could use to overturn the Columbia ruling,” Samore said.

At Yale, student organizers were similarly disappointed with the NLRB under Trump.

“Last year, Trump’s NLRB tried to use the rulemaking process to declare that our work doesn't count as ‘work,’” Ridge Liu, co-president of Local 33 UNITE HERE, wrote in an email to The Crimson.

Although HGSU-UAW successfully voted to unionize in 2018, the Republican majority on the NLRB meant the union did not have as strong of a backing for some of the contract provisions it pushed for.

HGSU-UAW has long demanded that its contract include a grievance procedure that covers identity-based harassment and sexual harassment and include independent, third-party arbitration.

When the union and Harvard agreed to a one-year contract in June 2020, it did not include such a provision, which would have allowed union members to raise claims of harassment and discrimination outside of Harvard’s internal procedures.

Though HGSU-UAW currently operates as an “open shop,” meaning students are not required to pay union dues for representation, the union had hoped to negotiate for a “union shop,” where dues are mandatory.

“I think mostly because Harvard knows that it can get away with [open shop],” Mancilla said. “The administration knows that under the Trump administration, we have no real recourse to be able to push against that with the NLRB.”

HGSU-UAW also recently brought a grievance against the Graduate School of Arts and Sciences and the School of Public Health over the exclusion of 108 students in Population Health Sciences from the bargaining unit.

Mancilla said that the union will not take the grievance to the NLRB because a ruling unfavorable to student unionization may set a detrimental precedent for other private university student unions.

“If we had at the very least a moderate NLRB, or definitely a Democrat-appointed NLRB, we can easily go to them and have a fair hearing on this,” he said. “But because the National Labor Relations Board has Trump, anti-labor appointees right now, that’s not really an option.”

Gould said that he believes graduate students’ informal boycott of the NLRB led to the 2019 rule proposal. Since the Trump NLRB could not overturn Columbia through a new case, he said, it tried to do so through a rule.

The rule is still under consideration, but if adopted, Herbert said it will inevitably be challenged and taken to court under a Biden administration more favorable towards unions.

The incoming Biden administration can influence student unionization through appointments and through legislation, according to Lafer.

“I expect that a Biden administration will make a very significant difference to this issue, will overturn the Trump labor board and restore the status quo ante that was in place under the Obama administration,” Lafer wrote.

Given the Board’s current vacancy, Biden will be able to appoint one Board member immediately upon assuming office, presuming the Senate confirms his nominee. Emanuel’s term expires in August and Robb’s term as General Counsel expires in November.

Biden will be able to replace the chair with an existing Board member — likely McFerran given her Democratic leaning — and may also be able to remove Robb earlier than November, Herbert added.

If Biden’s appointees are confirmed, the NLRB will have a Democrat-appointed majority with a pro-labor General Counsel by the end of 2021.

In terms of labor legislation, Gould said he “doubts” Congress will approve workers’ rights acts, such as the Protecting the Right to Organize Act, a bill that passed the House and would dramatically expand worker protections.

“It’s going to be a heavy lift to get this kind of legislation through such a divided Senate and House of Representatives, even though both of them are in Democratic hands,” Gould said.

Cory W. McCartan, a member of the HGSU-UAW bargaining committee, said provisions in the PRO Act would help the union reach a contract faster and what he calls “combat stalling tactics” by the University.

“I don’t think anyone here is holding their breath waiting for the PRO Act to happen,” he said. “But we’re certainly keeping an eye on that...as that gets introduced and hopefully starts to move through Congress. Whatever we can do to put pressure on our legislators to get that passed, we certainly will.”

Samore, the University of Pennsylvania organizer, also noted that Senator Bernie Sanders (I-Vt.) introduced the Respect Graduate Student Workers Act in November 2019, which aimed to protect graduate students’ right to unionize. It explicitly prohibits the NLRB from enforcing its 2019 proposed rule. The bill, however, has yet to receive a vote in the Senate and would have to be re-introduced in the current Congress.

As the union works to recruit more members and prepare to negotiate with the University for a complete contract, McCartan said he thinks it will be the “same old” for the union.

“As we move now into our second contract negotiation this year, a lot of the organizing will also focus on building power for that fight and on making sure everyone's voices are engaged in this pretty complex process,” he said. “So anything that happens at the Board is a bonus for that, but it’s not going to change our day-to-day work and our organizing focus.”

Mancilla said, though the NLRB can have influence over negotiations between private universities and their student unions, they are “not the end all be all.” Going forward, he said HGSU-UAW and graduate student unions across the nation will also be pushing the Biden administration for student debt forgiveness, immigration reforms for international students, and changes to Title IX regulations.

“In the meantime, the work continues,” Mancilla said. “Presidential administrations don’t set the agenda. They definitely shape the conditions and the tone, but they don’t determine what we do.”

Here are the 63 Biden Administration Officials with Harvard Ties