From ‘Outrageous Betrayal’ to ‘More Regular Order’: How A Pivot in American Immigration Policy Will Affect Harvard 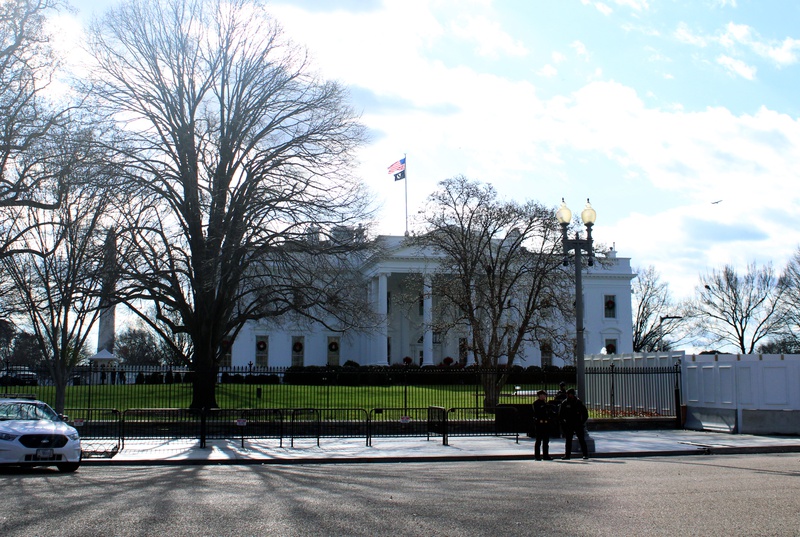 Since President Donald J. Trump entered the White House, his administration has sought to curtail immigration to the United States — a move that has threatened individuals and industries alike, including higher education.

That’s about to change.

Though experts and advocates said they are hopeful that Biden’s reforms will ease legal restrictions on immigration, they noted that institutional change will require more time.

Harvard administrators, including University President Lawrence S. Bacow, have publicly challenged Trump’s immigration policy over the past four years through letters, lobbying, and lawsuits. Experts agree that higher education leaders, campuses, and advocacy groups must join the government in pushing for change.

‘The Harms of the Past Four Years’

Miriam Feldblum, the executive director of the The Presidents' Alliance on Higher Education and Immigration, emphasized the hurdles the new administration may face in rolling back the countless anti-immigration policies that came out of the Trump White House, which she called “an outrageous betrayal of the aspirations of the U.S.”

“The harms of the past four years can’t be undone overnight,” Feldblum said.

In 2017, Trump temporarily prohibited entry of travelers from seven Muslim-majority countries and announced a plan to phase out Deferred Action for Childhood Arrivals, a protection for undocumented immigrants who were brought to the U.S. as children. Both changes impacted Harvard affiliates: several were barred from entering the country for weeks and up to eight months, and dozens of undocumented students feared the end of DACA could lead to their deportation.

In 2018, Trump instated a family separation policy as part of a larger “zero tolerance policy” approach intended to toughen immigration policy at the United States’ southern border. In addition, he deployed troops to the border and made it increasingly more difficult for immigrants to seek asylum.

The Trump administration also announced plans to terminate Temporary Protected Status — a program that safeguards foreign nationals facing dangers in their home countries — for immigrants from El Salvador, Haiti, Nicaragua, and Sudan. In 2018, over 200 Harvard affiliates from El Salvador were TPS recipients.

In 2019, the administration continued to introduce more immigration restrictions, such as requiring visa applicants to disclose social media identifiers and collecting their biometric data.

In fact, when Ismail B. Ajjawi ’23 — a Palestinian resident of Tyre, Lebanon — first arrived at Boston Logan International Airport in August 2019, he underwent several hours of questioning and had his phone and computer searched by immigration officers before he was deported.

In 2020, as the coronavirus pandemic forced Harvard to transition to a virtual format, the Department of Homeland Security and the U.S. Immigration and Customs Enforcement attempted to prohibit international students at online-only universities from remaining in the U.S.

The administration also launched an effort to regulate Optional Practical Training of F-1 visas, which allows international students to apply to work temporarily in the U.S. post-graduation. The DHS also proposed the elimination of “duration of status,” threatening the ability of students on educational visas to complete their course of study.

Overall, throughout his term, Trump introduced a plethora of requirements that made immigration to the U.S. more challenging.

Biden is expected to start implementing changes on his first day. He will sign a list of executive orders, including a reversal of the ban on individuals from Muslim-majority nations and sending Congress his proposal for an eight-year path to citizenship.

He has also promised to protect recipients of programs like DACA, TPS, and other asylum-seekers and refugees to uphold “our values as a nation of immigrants,” according to his website.

‘A Clear Message to International Students’

“What can be done in the first 100 days is send a clear message to international students. ‘You are welcome here,’ ‘We want to ensure that you have the ability to come and work and contribute in the U.S.,’” Feldblum said.

Eleanor Pelta — the former president of the American Immigration Lawyers Association and a graduate of Harvard Law school — also said that general policy shifts will help higher education institutions welcome international students, even in the absence of specific policies that support foreign students.

Yasmine Omri ’24 and Tommaso Serafin ’24 — first-years from Tunisia and Italy, respectively — were unable to join their peers on campus in the fall due to federal visa restrictions.

Both expressed hopes that they will have more opportunities under Biden than Trump.

“I hope that the immigration policy will become more flexible and understanding in these times of crisis, allowing international students to have the same opportunities as the domestic ones,” Serafin wrote in an email to The Crimson. “More generally, I hope that the sense of mistrust towards immigrants will be repelled, allowing the US to be a welcoming place for everyone, no matter where they’re from.”

Omri said she recognized the importance of regulation, but also hopes immigration policies and visa requirements will be eased under the new administration.

“I understand that there will be some restrictions and regulations — that’s necessary for every country to have. I just hope that rejection would not be the norm,” she said.

Others questioned whether policies Biden has proposed will do enough to support immigrants and international students.

Jason Corral, a staff attorney for the Harvard Immigration and Refugee Clinical Program at Harvard Law School, wrote in an email to The Crimson that DACA and TPS recipients need more than “rhetorical promises” from the incoming administration.

“For this we will need more than the rhetorical promises of the Biden Administration. We will need Congress to make permanent protection for people with DACA and TPS a priority,” he added.

Heba H. Mohamed ’23, a member of the Harvard Islamic Society, emphasized that it is not enough for Biden to simply reverse policies, such as the ban on individuals from Muslim-majority nations, as he has vowed to do.

“We are happy about this promise, but the question of whether this action will reverse the ban's impact remains,” she wrote in an emailed statement. “Many refugees were stranded and denied critical healthcare. Many families were divided.”

“Our hope is that the Biden administration will not just stop at reversing Trump's ban, but that it will also be cognizant of the long-term consequences it left on many Muslims,” Mohamed added.

Sarah Spreitzer, director of Government Relations at the American Council on Education, said the Biden administration is likely to be more pro-immigrant.

“It's incumbent upon colleges and universities in the U.S. to think about how we can be part of the solution,” Feldblum said.