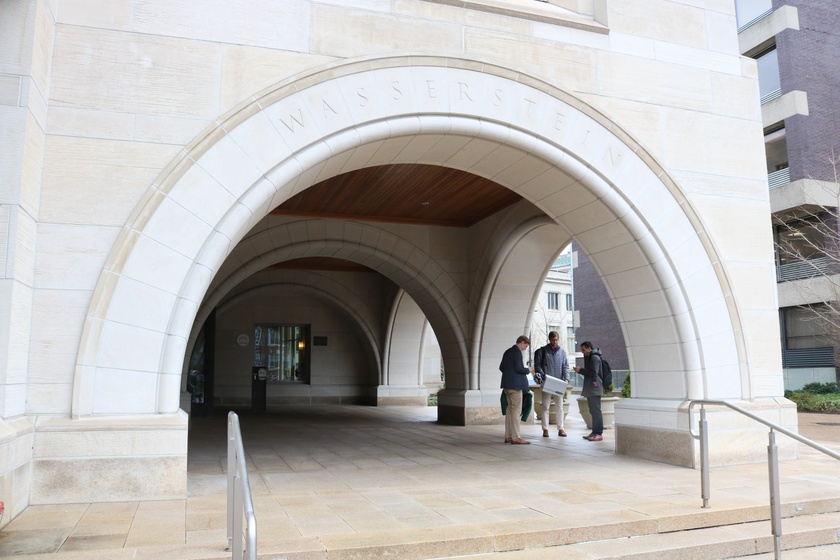 Seeking Asylum in a Pandemic

For 30 years, the Harvard Immigration and Refugee Clinical Program, a program administered by the Law School, has represented asylum-seekers and those at risk of deportation. Fifteen Minutes spoke with the clinic’s director, Sabrineh Ardalan, to discuss the impact of the recent changes on their clients.

Across the country, the COVID-19 pandemic and Trump Administration’s resultant travel restrictions have complicated the work of immigration-focused legal aid organizations. Some immigration courts have begun to conduct proceedings over video-conference systems, and others have closed altogether. At the same time, the Department of Justice has postponed all proceedings for non-detained people until May 1.

For 30 years, the Harvard Immigration and Refugee Clinical Program, a program administered by the Law School, has represented asylum-seekers and those at risk of deportation. Fifteen Minutes spoke with the clinic’s director, Sabrineh Ardalan, to discuss the impact of the recent changes on their clients. This interview has been edited slightly for clarity and concision.

FM: How would you characterize the work of the Harvard Immigration and Refugee Clinic, and which communities does the clinic primarily serve?

Sabrineh Ardalan: We represent people who are seeking asylum and other forms of humanitarian protection. Our clients come from all over the world. In recent years, we’ve had a lot of folks from Central America, El Salvador, Honduras, Guatemala, and a number of countries in Africa and the Middle East.

FM: Is there any particular way that the University’s decision to evacuate campus affected your clients?

SA: Through Zoom and Skype, we’ve been able to continue holding meetings with clients and teaching classes. Our work certainly hasn’t stopped. The immigration court filing deadlines are still in motion — in fact, detained cases are still moving forward and the federal courts are open for immigration appeals. We have no choice but to keep pressing forward.

In addition to the technological hurdles, we’re doing everything we can to get folks who are detained released from detention so long as they are not flight risks or a danger in their communities. We’ve written several letters to local ICE officials and are working with clinics across the country to advocate to the Executive Office of Immigration Review [the administrative body of immigration courts]. A lawsuit was also just filed to try to temporarily close the immigration courts. We’re not only focused on our clients but are trying to create policy changes that protect people’s lives and safety.

FM: What would you say your clients are experiencing at this moment?

SA: I certainly can’t speak for my clients — everyone’s experiencing things in different ways. I think some are worried about the health and safety of their families. Some clients work at jobs that put them at risk or no longer have jobs. They’re worried about how they’re going to pay rent. Other clients in detention fear the virus will spread quickly in detention facilities because people are in such close quarters. Everyone’s working with fear and uncertainty.

FM: As you mentioned, court proceedings for detained immigrants remain ongoing. What are they like in Boston?

SA: I haven’t had a hearing in Boston in the past couple of weeks, but I know lawyers are allowed to appear telephonically, and detainees are appearing over video conferences. According to the American Immigration Lawyers Association, some people are still going to court in person and are told to supply their own protective gear.

FM: How has the temporary delay on the cases for non-detained people impacted the clinic’s cases?

SA: Sometimes people may benefit from the opportunity to collect more information and prepare for their cases. A lot of the time, though, people have been waiting years to have their cases heard; they’ve prepared extensively. Rescheduling has left them in limbo. A number of cases the clinic is working on were supposed to have hearings this semester. Now they’re put off, and we don’t know when they will be rescheduled. There’s a back-log of over a million cases in the immigration court system right now.

FM: The Trump administration has announced plans to ban people from seeking asylum. What do you make of this response?

SA: Beyond the due process concerns, efforts to ban people from seeking asylum because of the virus directly contravene our obligations in both domestic and international law. The U.S., bound by the Refugee Convention Protocol of 1967, has an obligation to protect people who have a well-founded reason not to return to their home countries. You can’t deny people the protections they deserve, even in times of crisis.

FM: Has the clinic taken on particular advocacy positions in relation to the pandemic?

SA: We’ve written several letters asking ICE officials to release people from detention, asking the immigration courts to take action to do the same, and asking the government to protect people’s health and safety. My hope is that litigation and individual cases will help change the system.