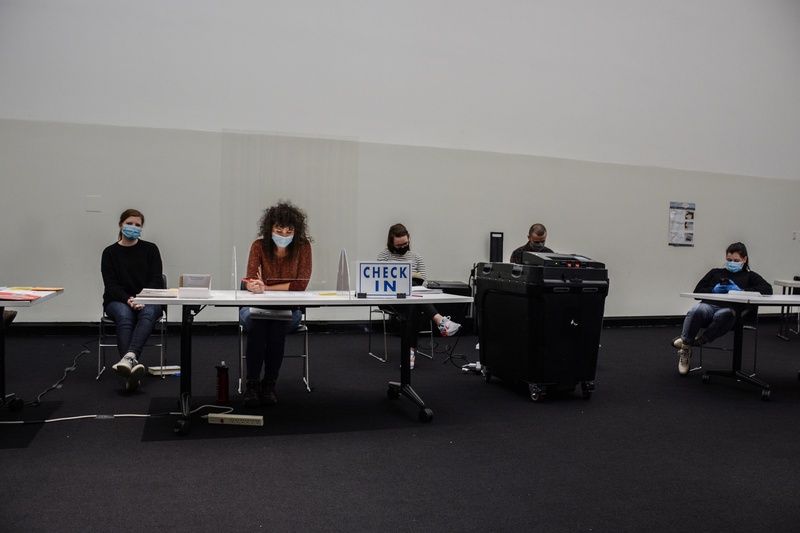 Normally packed with students coming to vote in the elections, Gund Hall was quiet Tuesday afternoon, as the majority of Harvard students are forced to stay home due to COVID-19 restrictions. By 2:30 p.m., only about 80 ballots had been cast at the voting center, leaving volunteers with little to do.

In the report, the two experts discussed evaluations of the incumbent president’s performance; Americans’ views on issues such as health care, COVID-19, abortion, gun control, and racism; and implications for future election cycles.

The publication is the latest iteration of a report Blendon has written in The New England Journal of Medicine on the health policy implications of each presidential election for the past twenty years.

“The idea is to give a weather forecast,” Blendon said. “We conduct original polling surveys all throughout the year on health and domestic issues. And then we do a review. We review interviews with about 500,000 people every five years.”

The report focused on trends of bipartisanship and policy disparities between the Democratic and Republican parties.

Blendon and Benson emphasized the importance of considering all three branches of the U.S. government — not just the presidency — when evaluating the implications of the election. The publication detailed how the two parties were likely to prioritize the policy recommendations of major donors and other keen supporters rather than advocate for policies supported by the majority of Americans.

“Because the United States is so divided politically with the exception of a few areas, major policy directions will be influenced heavily by which party gains control of the presidency, the House, and the Senate,” the report’s introduction reads.

According to Blendon, COVID-19 has subsumed many traditional high-priority issues — including health care policy itself — as the most important matter at stake in the election.

“What is really surprising here is that COVID exceeds health care policy,” Blendon said. “If we had talked a year ago, I would tell you that the Medicare for All debate — universal coverage, controlling healthcare and pharmaceutical costs — would be absolutely dominant.”

Blendon added that the heightened importance of COVID-19 may have negative implications for the current president.

“This issue has really hurt the incumbent president. People can’t go back to school, their kids, their jobs, they may lose the restaurant,” he said. “They don’t have an answer for this, but their answer is to expect the leader of the country to figure some way out of this.”

Blendon also said voters are paying attention to race and racism at levels that have not been observed for many decades.

“The second surprise you wouldn’t have predicted a year ago is that concern for race, inequity, and social justice is as high as a voting issue since the 1960s,” he said. “Events have led people to see this as one of the principal threats this country has to deal with.”

With the rise in importance of pressing topics like COVID-19 and racial justice, longstanding debates over issues like climate change have taken a back seat, according to Blendon.

“Climate change does not show up at the top of the chart the way it would have before,” he said. “The answer is because COVID is so personal. The race issue is so much in people's minds now. And the economy has underlying, real problems. It's hard to think about things that far away, into the future — 2050, we're going to have terrible floods and everything else because of the climate.”