Harvard researchers are pivoting away from the federal government to private companies for funding. 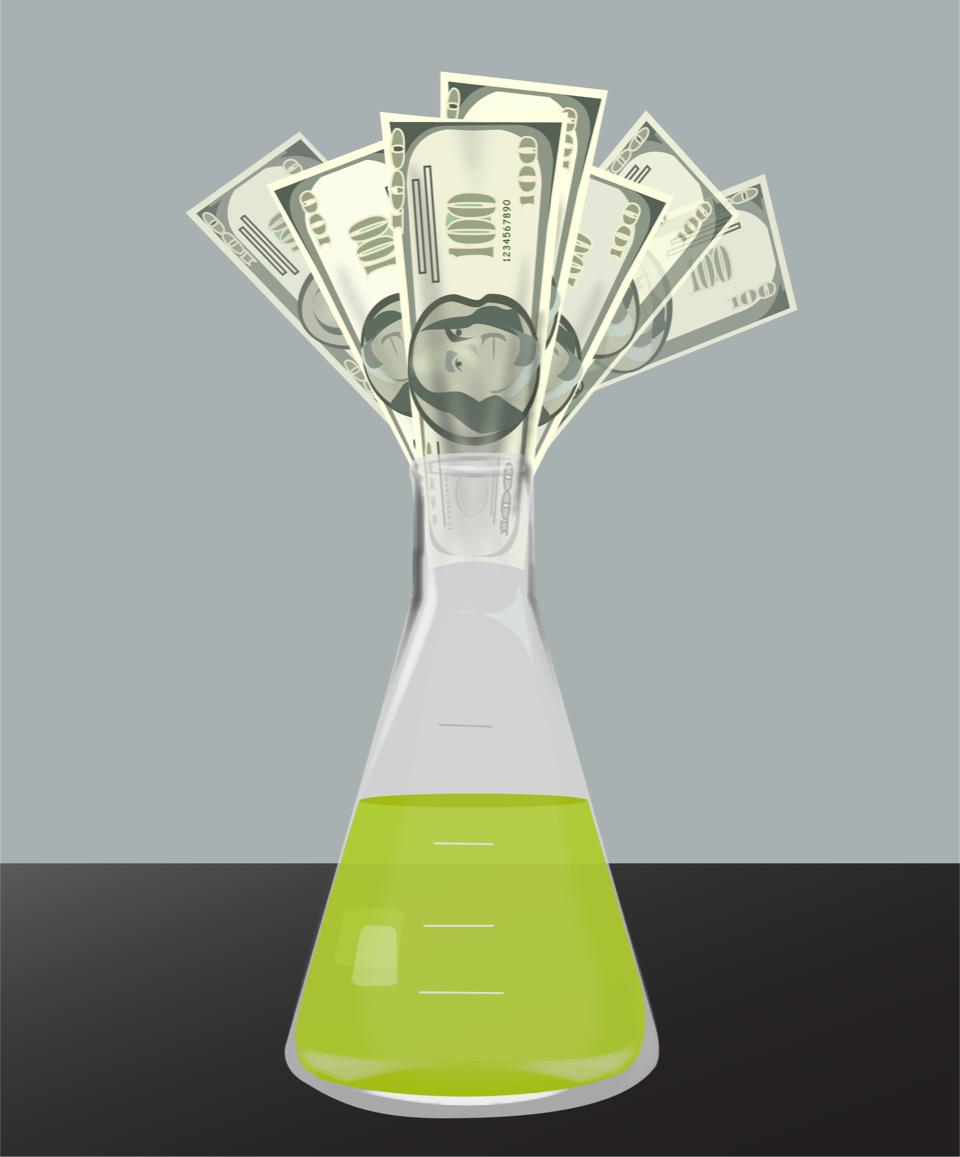 For decades, Harvard researchers could count on Uncle Sam.

From the 1980s through the early 2000s, federal sources of research funding grew at a steady clip, largely providing all of the capital necessary for Harvard’s faculty to engage in world-class scholarship.

Though government agencies like the National Institutes of Health and National Science Foundation remain the largest sources of the University’s research funding, a multi-year decline in federal allocations has bred uncertainty about such funds’ stability.

In response to these constraints, faculty are looking elsewhere for cash to support their increasingly costly research endeavors. Private sources of funding including foundations and corporations — supplemented by internal Harvard sources — have stepped in to fill the gap.

In total, Harvard researchers take in nearly a billion dollars in funding each year, equalling 18 percent of the University’s total operating expenses.

“More and more of our faculty are drawing at least part of their research support from non-federal sources, from foundations, sometimes from industry,” Dean of the Faculty of Arts and Sciences Claudine Gay said in an April interview.

But the changing landscape of funding comes with its own unique challenges, including potential conflicts of interest and constraints on the projects researchers can undertake.

When Harvard School of Public Health Professor S. V. Subramanian arrived at the University in the 1990s, he quickly learned where to go for research funding.

“There was just one funder in the town — NIH,” Subramanian said. “And maybe a few others, a handful, but nobody else really used to do much.”

The NIH — which doles out more than $30 billion for medical research each year — contributed approximately $442 million to Harvard in 2018. Grants from NIH make up 71 percent of Harvard’s federal funding and 50 percent of all Harvard research funding.

In the early 2000s, after decades of steadily increasing federal research allocations, Congress nearly doubled the NIH’s budget. Yet just a decade later — in the midst of a budget sequestration resulting from a standstill on Capitol Hill — the growth came to a grinding halt.

Starting in 2011, NIH funding declined for three consecutive years, the most significant disruption to the agency’s beneficiaries in decades.

Though federal funding has picked up in recent years — despite the Trump administration’s efforts to redirect money away from research and development — the increases are not enough to make up for declines earlier in the decade, Hyman argued.

“Yes, the funding outlook has improved, but it's not what it would have been had funding been on a kind of healthy trajectory,” he said.

Two factors have placed further strain on those applying for federal research grants.

For one, the number of researchers applying for NIH funding has continued to grow, contributing to a steady decline in the success rate of grant applications, from 32 percent in 2000 to 19 percent in 2017.

“They are all using expensive techniques and machines, because as we get more and more advanced, you're kind of probing more and more difficult things in the study,” Murthy said. “Each lab’s budget is also kind of going up.”

The scarcity of federal funds has pushed more researchers to apply for internal funding sources — like the Dean’s Competitive Fund for Promising Scholarship — driving up competition, according to Gay.

The grim federal funding landscape — as well as a longer review period for NIH grants — can disproportionately affect less experienced researchers, leading to a “vicious cycle” in which funding becomes nearly impossible to obtain, Murthy said. In order to present a compelling grant application, researchers increasingly must submit preliminary data.

“It becomes kind of, almost like a bad feedback loop of getting harder, because then they’re not able to do research,” Murthy said. “The number of people in the lab is lower, they’re not having as many resources. So when you write a new grant, what are you going to show?”

As the U.S. government becomes a less viable source for research funding, the private sector has moved to take its place.

Between 2006 and 2016, the share of federal research funding at Harvard dropped from 82.3 to 70.3 percent, according to annual reports by the University’s Office for Sponsored Programs. Meanwhile, the share of funding from foundations and corporations increased from 13.3 to 23.4 percent, representing a jump from $83.2 million to $197 million in private-sector grants.

Some faculty rely on private sources to support high-risk and traditionally underfunded ventures, according to Gay.

“Even in a world in which there is robust federal support for research, it’s often the case that some of the sort of highest risk, more exploratory research or research done by early-career scholars, that often tends to be the research that I think a lot of funding agencies are more nervous about,” Gay said. “I think many of us recognize that discovery requires taking risks.”

In 2018, Harvard School of Public Health Professor Tyler J. VanderWeele inked a five-year deal with Aetna which he said has allowed him to hire two additional research staff. VanderWeele is examining employee well-being at the company in exchange for research funding and access to a dataset for his own research.

“These other funding opportunities, I think, allow for the support of work in areas which are important, but which in my view, are very much underfunded by the government,” VanderWeele said.

Researchers in other areas also face barriers in acquiring federal funding. For instance, because federal law prohibits marijuana usage, the NIH and other federal agencies have historically neglected to fund research into the drug’s health effects. As more states legalize recreational and medical use of marijuana, increasing the need to study such activities, non-government sources have pledged their own green.

A private equity manager who is heavily invested in the Canadian legal cannabis market, Charles R. Broderick, donated $9 million to Harvard and MIT earlier this month to fund marijuana research. The gift is the largest ever independent donation to a biological study of cannabinoids.

Broderick wrote in an email that he made the donation in part to help “lend credibility” to an area of research he believes has been “stigmatized and maligned.”

“I think there was some reticence at first, as this was somewhat uncharted territory,” Broderick wrote.

Climate research also tends to receive little federal support, according to Anderson, who studies chemical factors contributing to changes in Earth’s atmosphere. He argued that meager federal allocations do not meet the need for research into the “staggering” threat of climate change, and that private sector leaders are often more focused than the federal government on achieving concrete research objectives.

“Government agencies can become programmatic,” Anderson said. “When you have people who have the resources to revolutionize climate research in this country and they are focused on that as an objective, you can advance a topic so quickly.”

The rise of private sector funding has brought with it conflict of interest issues that can call into question the validity of research conducted using such funds.

For instance, some researchers argue that funding from fossil fuel companies generates unavoidable conflicts of interest.

Geoffrey J.S. Supran, a History of Science postdoctoral fellow who studies climate change, contends that the “elephant in the room” of much climate research is the possibility that fossil fuel companies financing studies could “disrupt” objective scientific processes.

“I’d say the fossil fuel industry’s colonization of academia is straight out of the strategy playbook of big tobacco,” Supran said. “Any semblance of altruism or good faith is dwarfed by the real objective, which is the corporate capture of academia as a strategic tool for stifling action on climate change, which threatens their business model.”

“Much of the design was driven by making sure that we had a balance to protect the independence of what we’re doing,” he said.

Hogan said that while research could potentially be influenced by private funding “in principle,” there is no evidence to suggest any of the group’s work was compromised. In fact, he said Enron cut off funding after the group released a study contradicting the company’s aims.

“He didn’t want to be associated with me,” Hogan said of Jeffrey K. Skilling, who was Enron’s CEO at the time.

Skilling’s lawyer did not respond to a request for comment.

Harvard maintains policies to curb financial conflicts of interest in faculty research pursuits. Faculty members cannot grant outside sponsors authority to “direct their studies” or “delay the release or publication of research results,” per University policy.

If a faculty member fails to comply, the dean of their school can impose sanctions as they “deem warranted.”

VanderWeele said that though he has so far encountered no “restrictions” from Aetna in carrying out his research and does not anticipate future meddling, he acknowledged that private-sector agreements could inherently threaten complete “academic freedom.”

“I would guess that if there was some result that made them look really bad, that they could make our life difficult if we wanted to publish that,” he said.

Sometimes, outside agencies crack down on unethical donation practices at the University. In 2018, a Medical School study of the effects of regular alcohol consumption came under fire for its ties to the alcohol industry. Though NIH footed the bill, a private foundation that raises money for NIH solicited funds from Heineken, Anheuser Busch InBev, and other alcohol companies for the study.

Associate Medical School Professor Kenneth J. Mukamal, who led the alcohol study, pitched the project to alcohol executives with his colleagues at high-end hotels, telling them it represented “a unique opportunity to show that moderate alcohol consumption is safe and lowers risk of common diseases,” the New York Times reported in March 2018.

In June, two internal NIH reviews into the agency’s funding of Mukamal’s study confirmed there was “early and frequent engagement” between liquor companies, researchers, and employees of NIH’s National Institute on Alcohol Abuse and Alcoholism.

Such engagement, they concluded, “calls into question the impartiality of the process.” The NIH terminated the study.

Mukamal wrote in an emailed statement that the probe was not directed at his research team, adding that NIAAA asked him to speak with alcohol executives only after he wrote the grant proposal that outlined the study’s goals.

“Industry had no role in the design (since, as noted, the general approach long preceded any such discussions) and provided funding specifically to NIH (i.e., not to investigators at HMS or anywhere else),” Mukamal wrote. “The NIH Office of the Director itself approved the agreement with industry through two separate reviews prior to any human subjects activity.”

While Harvard itself has largely avoided damaging conflict of interest scandals in recent years, administrators have reevaluated their policies following misconduct at other institutions.

In September 2018, the chief medical officer of Memorial Sloan Kettering Cancer Center in New York resigned amidst reports that he had failed to divulge millions in funding from private health care companies.

Hyman said researchers at the Broad Institute — a science research center affiliated with Harvard — have displayed “heightened awareness” since the Memorial Sloan Kettering allegations came to light, but said it remained too early to predict whether leadership will commit to “re-writing any of its guidance” to faculty.

“People raised the question at leadership meetings as to, is there something we should do to make sure that when people write papers, all of the relevant potential conflicts of interests are listed?” Hyman said.

Hogan argued that even when researchers take all possible precautions, no funding source is completely “immune” from the threat of a conflict of interest.

“I don't think there's any neutral money out there."