A Lively and Lighthearted Take on ‘Sense & Sensibility’ 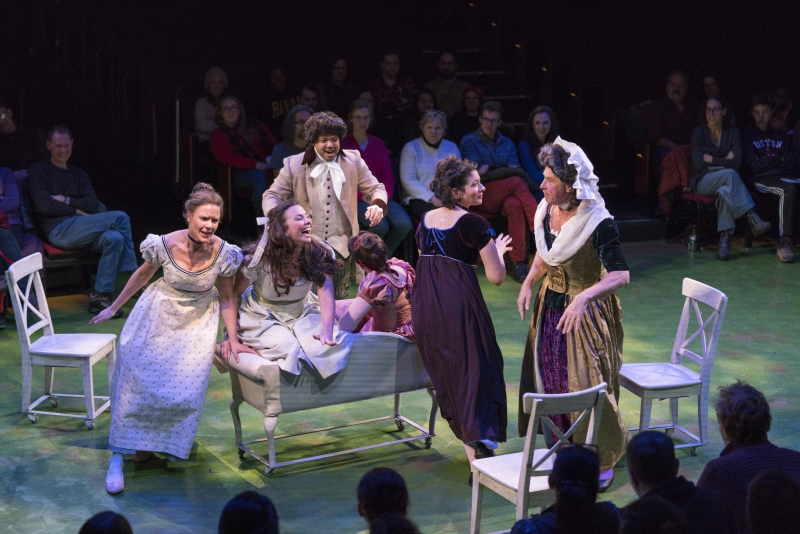 The cast of Bedlam's Sense & Sensibility.

When readers think of Jane Austen and her writing, matters of matrimony, inheritance, and land ownership likely come to mind. The theater company Bedlam does not stray too far from these elements of Austen’s world in its approach to staging “Sense & Sensibility,” a new play by Kate Hamill which runs at the Loeb Drama Center through Jan. 14. Chock full of marriage-minded gossip, drawing room coyness, and well-timed quips—not to mention clever staging—the production provides a lively and lighthearted evening of entertainment that will delight fans of the 19th century novel, as long as they are not Austen purists.

In a nutshell, this production of “Sense & Sensibility” follows the lives of Mrs. Dashwood (Lisa Birnbaum) and her daughters, Elinor (Maggie Adams McDowell), Marianne (Jessica Frey), and Margaret (Violeta Picayo), after Mr. Dashwood (James Patrick Nelson) dies. When his son from his first marriage inherits the family home, the Dashwoods must leave to find new lodgings. “It was a question of the law,” Mr. Dashwood says, waking briefly from his upright deathbed, creatively staged with some of the ensemble holding up a topsheet while others used their bodies to form Mr. Dashwood’s bedside table. Matches and misfires inevitably ensue as the family determines who can afford to marry the poor Dashwood sisters.

Bedlam invigorates Austen’s money-and-marriage premises with motion and movement. As the show begins, cast members dressed in loose-fitting pants and grayscale tops shimmy and snap to the groovy beats of Pharrell Williams’s 2014 song “Come Get it Bae.” As the dance proceeds, the cast strips off their 21st-century outfits to reveal 19th-century white and billowy undergarments, and the routine morphs into a country ball, complete with balletic arm movements and the tasteful strumming of violins. Past and present mingle in a way that does not feel distractingly anachronistic but, rather, resounds with joy. As director Eric Tucker writes in his program note, “Austen’s stories resonate with us today because not all that much has really changed about people. We love gossip and intrigue and celebrity. We fall in love with people we can’t have and people we shouldn’t have and people our parents hate.”

Yet the production’s novelty is not in its “timeless” subject matter (indeed, if Austen’s novels and 19th-century British life are not your cup of tea, this show may not be for you). The set and blocking are instead what keep the show moving—quite literally with wheels. The set pieces—elegant, free-standing window frames and simple chairs which set the stage for heart-to-heart conversations in the parlor as well as boisterous dinner parties—are all on wheels. At one of Mrs. Jennings’s country dinners, for example, the guests gossip about the dull Colonel Brandon’s (also James Patrick Nelson) affection for the youthful and vibrant Marianne. As Marianne plays the pianoforte and Colonel Brandon watches, cast members make comedic use of the props’ wheels, pushing Marianne’s piano bench and Colonel Brandon’s chair closer together.

Throughout the show, the ensemble uses the set’s mobility to heighten the show’s farcical elements and keep the eye moving. When Elinor cautions Marianne to be sensible about a suitor’s impropriety—John Willoughby (Benjamin Russell) has offered to buy her a horse—the ensemble balances on nearby chairs, trying to camouflage themselves as topiaries or statues. As Elinor chides Marianne for even considering to accept Willoughby’s gift without the pair’s formal courtship, the ensemble use the chairs’ wheels to inch themselves closer to the sisters to catch wind of their intimate conversation.

Like Austen’s novels, Bedlam’s production of “Sense & Sensibility” hinges on blithe female protagonists and suitors with tangled backstories, played pleasantly by an entertaining cast. Like the novel, the show, too, muses on the benefits of thinking reasonably versus giving in to emotions and passions. With such energy, the cast moves back-and-forth across the stage, inviting audience members into the gossipy fray for an evening of lively, lighthearted Austenian fun.