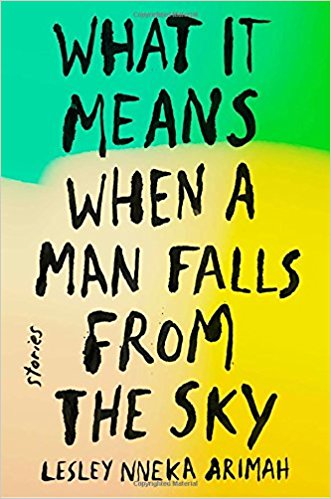 In the last story of her debut collection “What It Means When a Man Falls From the Sky,” Lesley Nneke Arimah writes: “Girls with fire in their bellies will be forced to drink from a well of correction till the flames die out.” Arimah’s stories are full of such girls at every stage of life, who possess every type of fire. Mothers, daughters, grandmothers, aunts, cousins, neighbors, friends, lovers, enemies; love, jealousy, grief, tenderness, resentment, admiration, disappointment, understanding, self-loathing. Arimah renders each character with unceasing compassion, sparkling diction, and a wit that endures through even the direst of situations. She unflinchingly depicts the painful courses of correction her characters experience, while showing us that sometimes, albeit at tremendous costs, the fires find a way to burn on.

The twelve stories in “What It Means When a Man Falls From the Sky” are set in Nigeria, America, and a few fantastical realities; recurring motifs include the Biafra War, and various configurations of Nigerian and Nigerian American families. No matter the particular setting, however, Arimah places her characters in moments of difficult love, wrenching decisions, and seeming helplessness. In “Buchi’s Girls,” a woman who has lost her husband must swallow her pride to support her two daughters. In “Second Chances,” the narrator’s dead mother, whose last words to her were of bitter disappointment, comes back to life for a day. In the title story, a mathematician who calculates grief must confront the tremendous nature of suffering in a dystopian future where nations massacre each other for dry land. The stories abound with absent spouses and dead parents, estranged family and divided households.

The universality of the tumultuous emotions that arise in these situations becomes a prominent theme. In “What Is a Volcano?”, a myth about a feud between the gods Ant and River, Arimah concludes: “River’s grief was so deep it consumed [the other gods], and her grief became their own. …They tore the world apart.” The strength of this deep universal current, however, emerges from the narratives’ rich specificity. Arimah’s stories are first and foremost about people, each of which Arimah chisels into three vibrant dimensions through masterful description. In one scene in “Light,” protagonist Enebeli is summoned to his teenage daughter’s school because she has been sending love notes to a boy during class. Arimah writes, in a brilliant line of free indirect discourse from Enebeli’s perspective, “The only thing that saves the boy from Enebeli is that he seems as confused about the girl’s attention as everyone else.” Such a thought from a father transcends borders, cultures, eras.

Arimah turns her keen ear to a captivating range of voices and narrative techniques. When using the third person, she toggles smoothly between different levels of narrative distance while remaining anchored in the protagonist’s experience. In the first person, her characters speak with a candid, unpretentious, often wry self-awareness. Sometimes, as in the longer stories “Glory” and “Wild,” both of which involve agonizingly prolonged dinners gone awry, Arimah depicts dialogue and scene in precise detail. At other points, as in “The Future Looks Good,” the essence of a woman’s life is given in a single sentence: “Her grandmother, overworked to the bone by the women whose houses she dusted, whose laundry she washed, whose children’s asses she scrubbed clean; overworked by the bones of a husband who wanted many sons and the men she entertained to give them to him, sees her son to his thirteenth year with the perfunction of a nurse and dies in her bed with a long, weary sigh.” This command of language is further maintained from sentence to sentence, clause to clause, with original, evocative metaphor. An embarrassed woman walks with her “head bowed so low she’d have gravel and leaves in her hair.” Men dart in and out of a girl’s life “like a lizard’s tongue.” Infatuation “can flip, the turning over of a mattress to hide an embarrassing stain.” These little dazzling insights make Arimah’s writing, at the most basic level, an immense pleasure to read.

Individually commendable, the collections’ technical and thematic aspects culminate in the its most important characteristic: the way in which it implicates the reader in the tensions of every revelation and decision, every story’s human urgency. At all levels, from individual word choice to the curation of stories, Arimah demonstrates rich imagination and a fierce love for both language and people. Her characters span the whole bursting range of humanity; that they understand themselves to be fatally flawed makes them all the more understandable and unforgettable in their struggles against circumstance, the past, and themselves. There is no naivete: The characters often lose the battle, sometimes with horrendous consequences. But the fight, in Arimah’s hands, means the world.

—Staff writer Emily Zhao can be reached at emily.zhao@thecrimson.com.

‘Marlena’ A Strong Warning For Teens