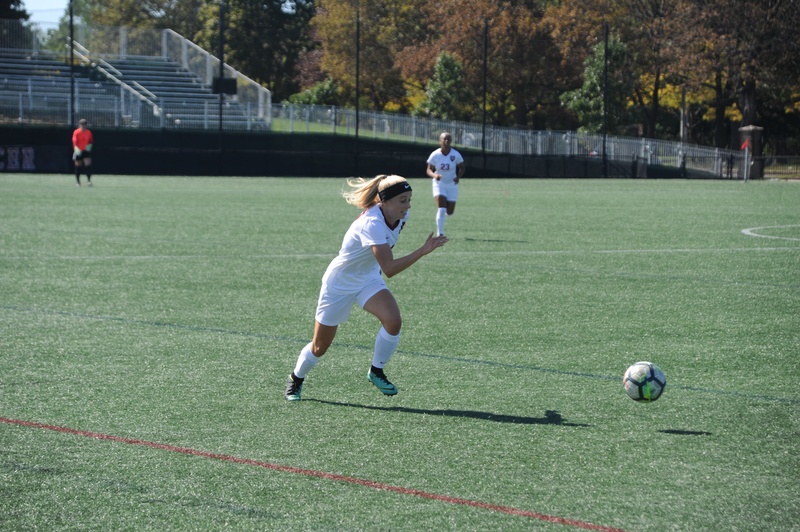 Despite the rough patches that the Harvard women’s soccer team has gone through this season, Saturday’s game against Dartmouth was always about something bigger than the team’s place in the standings. With four seniors playing for the final time in their careers at Jordan Field, the Crimson looked to send them off with one last home win.

“A lot of players were gritting it out for our seniors,” Harvard coach Chris Hamblin said. “It just goes to show how much the players care about them and want to get a good result for them.”

Just as in last year’s Senior Day contest, the Crimson found itself in a tight overtime battle. Unlike last year, however, when then-senior Rachel Garcia stepped up for her class and scored the winning goal, it was a freshman ended up the difference maker on Saturday.

Forward Murphy Agnew, who entered the matchup as the team leader in assists, found the back of the net in the 103rd minute with a curled effort from outside the box. The well-struck ball swerved away from diving Big Green goalkeeper Mariel Gordon to seal the overtime win, the squad’s third such victory this season.

In overcoming Dartmouth (6-10-0, 0-6-0 Ivy) by a final score of 2-1, Harvard (8-8-0, 2-4-0) moved back to .500 for the season and now has a chance to secure its 11th straight winning record if it can top Columbia in the season’s final weekend. The Big Green, meanwhile, locked up a last-place finish in the conference irrespective of next week’s results. 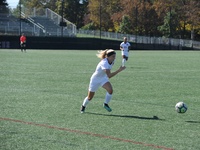 Before Agnew’s game-winner, the contest swung back-and-forth with each team grabbing the momentum at different points. Dartmouth came out on the offensive early on, forcing three quick saves from Crimson junior goalie Danielle Etzel.

Etzel would continue to be vital to her team’s chances, as she collected a career-high 13 saves on 14 shots faced. Her previous career high for saves had been five, a number which she passed early in the second half.

Before the Big Green could capitalize on any of its chances however, Harvard struck first in the 20th minute. Junior midfielder Leah Mohammadi found Agnew on the counter, and Agnew swiveled past two backtracking defenders before slotting home past Gordon. It was the freshman’s first conference goal of her career, and first one this year since the middle of September.

“Murphy’s been a special player for us,” Hamblin said. “She’s tough [for defenders] to handle. The one thing she’s been missing is her final touch, and we told her to get closer to goal and the results would come, and that’s what she did today.”

Chances came at a premium for the rest of the first half, and the two teams entered intermission with the Crimson holding on to a one-goal advantage.

After the break, Dartmouth once again started on the front foot. This time, however, it was able to find the finishing touch as freshman defender Bonnie Shea nodded the ball in from a corner kick in the 59th minute. Harvard’s set piece defense was otherwise spotless, as it neutralized 12 other Big Green corners, but Shea’s goal was enough to tie the match at one apiece.

Dartmouth continued to surge forward to try to take the lead, and just like last week—when Princeton scored four times in the second half to blow open the game—the Crimson was at risk of letting the contest slip away.

“This week in training, we tried to focus on the things that we could improve in our game,” senior midfielder Dani Stollar said. “We switched a couple of things up, and stayed focused on what we could control out there.”

Unlike last week, the Harvard defense held out and kept the game tied. The Big Green ultimately recorded 15 shots in the second period alone, with nine of them on target. The Crimson meanwhile, only launched five shots. Dartmouth also had seven corners to Harvard’s none in the second 45 minutes.

When the two teams reached overtime, however, it was anyone’s game for the taking. After a slow first half of overtime, Agnew’s impressive effort sealed the result early in the second, sending the seniors off with one last home win.

“Getting our last win on our home field was the best we could have asked for,” senior defender Candy Janachowski said. “Everyone put themselves on the line today, and we really couldn’t be happier.”

—Staff writer George Hu can be reached at george.hu@thecrimson.com.