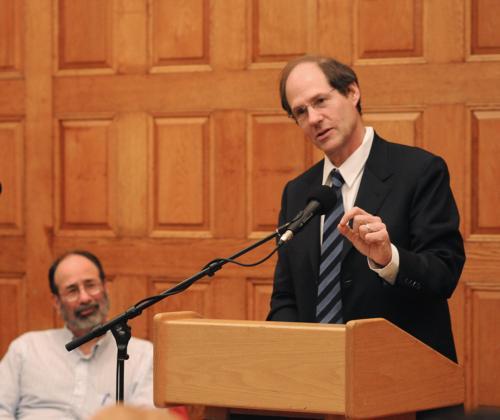 Harvard Law professors rank highest nationwide in the judicial impact of their legal scholarship, according to a new study examining citations of law review articles by U.S. high courts, but no women scholars across the country placed in the top 25.

The impetus for the study, its authors at the University of St. Thomas Law School said, was recent dialogue in legal circles questioning the value of legal writing and its applicability to the real world. In 2011, Supreme Court Chief Justice John G. Roberts declared legal scholarship “largely of no use or interest to people who actually practice law.”

While judicial citation rates are generally low, the study—which looked at citations by the U.S. Supreme Court, U.S. Court of Appeals, and state high courts—concluded that “a certain subset of scholars are both noticed and cited by the judiciary as well as their peers.”

That the most-cited legal scholars hail from Harvard is unsurprising, according to Valerie Aggerbeck, one of the authors of the study.

“When you are citing in a judicial opinion, you want to rely on the strongest authority that you possibly can, and when there isn’t precedent in the case law you can rely on, you’re going to want to choose an author with credibility,” Aggerbeck said. “Harvard Law Review is an excellent law review, and Harvard Law School professors are considered experts in their fields.”

Fallon described the challenge law professors face in trying to bridge two groups—“practicing lawyers and judges” and “more theoretically minded professors and students”—whose interests often diverge. “I would like to think that we at Harvard Law School do a good job at keeping a foot successfully in both camps.”

But according to the metric used in the University of St. Thomas study, men—at Harvard and across the country—influence the judiciary to a far greater extent than their female colleagues. Women law professors were entirely absent from the rankings.

The world of legal scholarship has long drawn criticism for gender inequality. Women comprised 22 percent of tenured Law School faculty in the 2015-2016 academic year, according to data from the Office of Faculty Development and Diversity, and Harvard Law Review has struggled historically to achieve gender parity in its membership.

In an email, Fallon called the underrepresentation of women “clearly part of a larger, disappointing, regrettable pattern”—one that is changing more slowly than he had expected.

The study’s authors offered up theories in an interview to explain the discrepancy. University of St. Thomas research librarian Nick Farris attributed the absence of women from judicial citations to a time lag—many of the top scholars began publishing their work several decades ago, when law school faculties were heavily male-dominated.

Aggerbeck hypothesized that the gender gap will close over time, as women continue to enter these fields and gain notoriety.

Manning, who wrote in an email that he believes that judicial citations are not the most meaningful measure of scholarly impact, thinks that women should already rank higher.

“By any reasonable measure of quality of legal scholarship (which citation counts capture only very imperfectly), there are certainly women who belong in the top 25,” he wrote.

—Staff writer Claire E. Parker can be reached at claireparkerdc@gmail.com. Follow her on Twitter @ClaireParkerDC
Want to keep up with breaking news? Subscribe to our email newsletter.