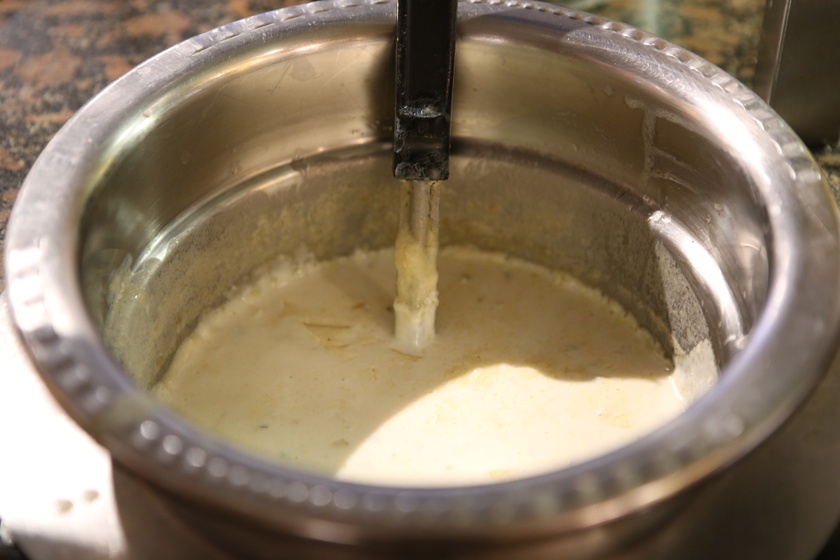 I approach the bar and sit next to an older man with an empty bowl. “What’s in the New England clam chowder?” I ask him. “Blood. Sweat. Clams,” says the man, with a thousand-yard stare.

Seafood terrifies me. It always has. The taste (sweet, cloying, thick) makes me cringe. The scent (pungent, oily, sharp) makes me tremble. The texture (veiny, dense, taut) makes me weep. Mussels, oysters, prawns—I fear them all.

I try to keep quiet about my ichthyophobic leanings, though. I just want to be treated like everyone else. Luckily, this is pretty easy: College students can’t afford to go out for seafood, and nobody asks questions if I skip the Catch of the Day.

Then, last Monday, everything changed.

“Hey, Laura,” my editor asked. “Can you do a clam chowder tour of Cambridge?”

“No, thank you,” I said, fighting to suppress a surge of panic. “I take my fish oils in gummy form.”

She was unmoved. “Write it,” she said, a piscine gleam in her cold, glassy eyes.

“Why Grafton Street?” you’re probably wondering. “That’s not a seafood place. Do they even have chowder there?”

I arrive on a Thursday at 3 p.m.—off hours—half hoping that they’ll have run out of food. Sure, New England clam chowder is on the menu, but supplies run low all the time.

Unfortunately, my soup arrives at record speed. “Your chowder!” my server announces, presenting me with a bowl the size of a child’s bathtub. I look pleadingly into her eyes. Unable or unwilling to probe the depths of my distress, she scurries away, leaving me only a packet of oyster crackers and a sudden awareness of my own fragile humanity. I am alone.

My chowder is glutinous and pale yellow, dotted with chunks of mysterious white and red. Fearful, I dip a spoon into the depths of the dish, probing for answers or at least the bottom of the bowl. I find neither.

It tastes like terror, with a hint of onion.

By 4 p.m., I’m ready for round two. John Harvard’s is hardly a chowder joint, but it strikes me as marginally more nautical than Grafton Street. The brewery does, after all, serve calamari, cod, and fish and chips. It’s also slightly closer to the River. I can almost hear them—the clams!—gnashing and flapping in the fridge.

I approach the bar and sit next to an older man with an empty bowl. “What’s in the New England clam chowder?” I ask him.

“Blood. Sweat. Clams,” says the man, with a thousand-yard stare. He’s seen the other side of the bowl. I nod and flag down a server.

My chowder comes in a little china bowl with a saucer. Chives dot the lumpy surface. The man and I clink bowls like teacups, disrupting the chives and burying them in the chowder’s creamy depths. I tip the bowl to my lips.

“You can do it, Laura,” the man murmurs encouragingly. “You’ve come so far. Don’t quit now.”

He’s right. I straighten my back and take a second bite, and then a third, spooning faster and faster until my body tenses up and I quit, dropping my spoon with a clatter into the empty bowl.

Emotionally drained and physically bloated, I approach my final destination.

Inside, Legal Sea Foods smells faintly of the sea. Anchors and compasses line the dark oak walls. Weathered sailors crowd the long oak bar, clinking grog and spinning yarns. A door in the back swings open with a bang, and a burly fisherman staggers out of the kitchen, a clam the size of a small dog thrashing desperately in his embrace.

I blink. The server proceeds calmly down the aisle, platter of wriggling shellfish in hand. Warily, I take a seat, and place my order for the third and final time. “New England clam chowder, please,” I say. He nods, grave.

“Pull yourself together,” the diced potatoes whisper. “You’ve been training for this.”

“Strong as the sea,” the black pepper sighs.

The surface of my chowder boils and churns. “You’ll never win,” the clams jeer.

Closing my eyes, I plunge my spoon into the heart of the bowl, so hard I hear the muffled clink of stainless steel against ceramic. The chowder meets my tongue in slow motion. The moment takes on a shocking clarity, my brain and my taste buds sharp as a gooseneck barnacle.

That night I dream of clams, those squishy bivalves from hell, mouths snapping and clacking in a cacophony of chitinous, aquatic loathing.

The chewing sounds echo my own.