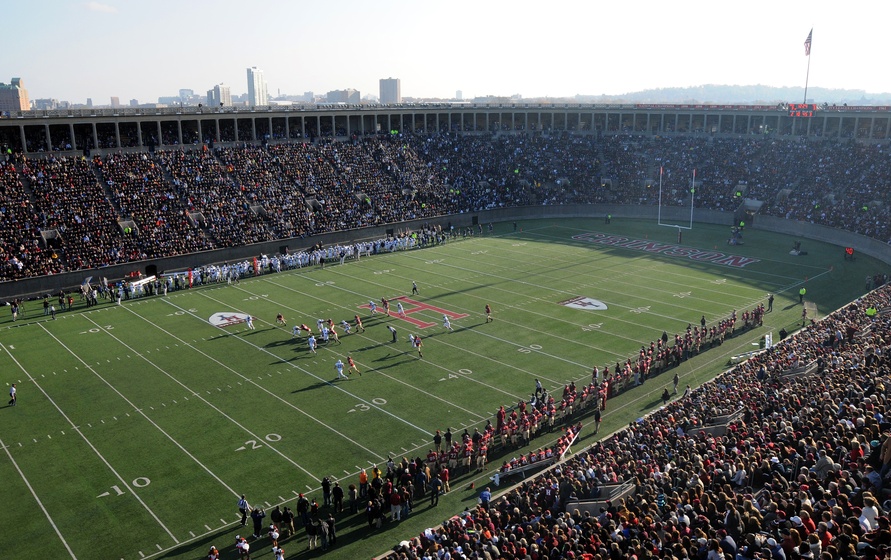 A Changing Game: A Look at the Ivy League's Ban on Tackling

Most players believe that football should make a space for both safety and zeal.

In recent years, concern over the health of football players has led to a number of changes in the way the game is played. Most recently, the Ivy League has moved to put an end to full-contact practices during in-season practices.

While football is a violent and intense game, safety has been at the forefront of discussions in the football community recently. Harvard’s Head Coach Tim Murphy understands the decision behind such a ban. “I think everyone at our level of football is trying to do [their] very best to maximize the health and welfare of our student athletes,” Murphy says. “Rather than waiting potentially a long time for [this ban] to happen on a national level, we [the Ivy League] elected to do it on a league level.”

Most players believe that the sport should make a space for both safety and zeal. “We’re really trying to strike a balance to maintain what we all love about football—the physicality and going to field and enjoying ourselves... and balancing that with player safety which is something that’s really important to everybody,” defensive end Langston E. Ward '16 said.

Middle linebacker Eric J. Ryan '17 agrees. “I haven’t heard any complaints really," he says. "I think for the most part everyone understands that the... intensity of practice isn’t going to change. Not actually tackling forces you to work on your footwork, on your fundamentals, that much more. Games are a different environment and practice is definitely more controlled. The essence of football, the games, will be what you’ve come to expect from it.”

The ease of the compromise might originate, in part, from the fact that, at least at Harvard, practices hardly ever involved live tackling or scrimmaging. Murphy expects that the change will have very little impact.

Not only will practices remain much the same, but players also seem unconcerned that this new rule will impact the mentality of the game. “Regardless of any policy that may be in play, everyone is in their zone on the field not really thinking about what admin decisions are being made in the Ivy League,” Ward says.

Ryan echoes a similar sentiment: “Going into games is… a no-hold-back kind of mindset, you’re allowed to let loose. I think once we’re actually playing and everything is live... the nature of the game will be relatively untouched. It’s just leading up to those games that it’s a different process.” Going forward, the team is looking to experiment with mobile virtual players that simulate tackling.

While the team plays about three out-of-league games each season, players and coaches are not worried about a mis-match given the change in practices. Harvard has the second highest winning percentage in all of Division 1 football and, according to Murphy, has effectively been practicing this way for the last 15 years.

While Murphy does not believe the ban will do much to affect the performance of the players, he does see it as an indication of the future of the sport. “In the last decade the culture [of the sport] has changed dramatically," he says. “Rule changes have changed the game we play for the better. I’d be surprised if in the very near future this wasn’t a rule for all of college football.”