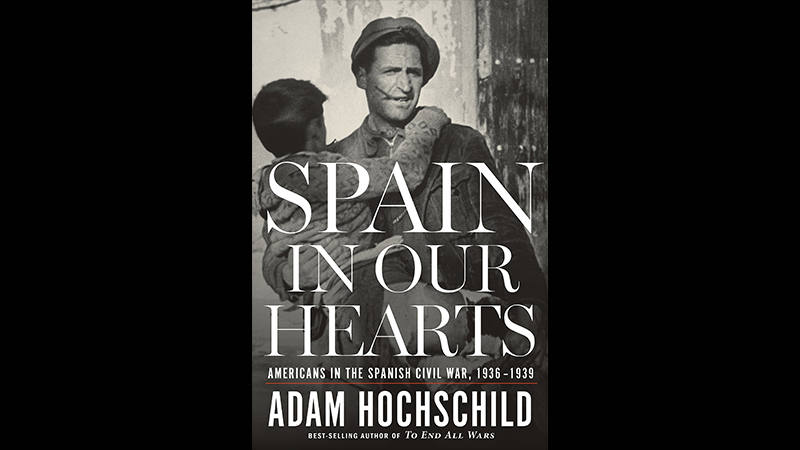 For me, it’s all about finding the right cast of characters. If I can find a group of people who lived through an extraordinary time and bring those people alive, then I feel I’m doing my job.

Adam Hochschild ’63 has made a living as an author and scholar. He began as a journalist, was active in the anti-Vietnam War movement, and co-founded Mother Jones magazine in the mid-70s. In recent decades, Hochschild has been especially notable as a historian, having published half a dozen narrative histories. His 1998 book, "King Leopold’s Ghost," won both the Mark Lynton History Prize and the Duff Cooper Prize. Hochschild recently visited the Harvard Bookstore to discuss his most recent work, "Spain in Our Hearts: Americans in the Spanish Civil War."

Fifteen Minutes: It’s always exciting to meet another graduate of the College. You studied History and Literature while you were here and really have blended the two in your career. Did you have any idea you wanted to do that as an adult back when you were in college?

Adam Hochschild: Not this way. At that point, I felt I was destined to be a novelist, but soon learned otherwise, unfortunately.

FM: As an undergraduate, you wrote a piece for The Crimson about college students in the Soviet Union and your travels there. You wrote a great deal about some student journalists there. Did meeting them spark an interest in journalism?

AH: My belief when I was a student was that what I really wanted to do was write fiction, but like Hemingway, and like Stephen Crane, [starting with journalism] could be a path. So I did start looking for newspaper jobs pretty quickly after I graduated, and I had some other things to do first. In those days we faced the draft and I avoided the draft by going into the Army Reserve for sixth months. I was briefly a civil rights worker in Mississippi in the summer of 1964, and then started looking for newspaper jobs.

FM: You’ve written a lot about communism and socialism, be it in Mother Jones or The Unquiet Ghost or Spain in Our Hearts or that article for The Crimson. When did that continued interest in these political trends start and how has it grown with you?

AH: You couldn’t be anywhere in the 1960s, especially Cambridge, without feeling that there were promises of great change in the air. The civil rights movement was a huge thing here; some students were going off and becoming freedom riders. Of course, by the mid-60s we had the Vietnam War, and I was very much involved in the movement against the war. I think of myself as being a child of the 1960s. If I had graduated from here in 1953 instead of ’63, heaven help us, I might have been a Wall Street lawyer or something.

FM: You’ve created a wonderful portfolio of writing that brings history to life and breaches the bounds of its typical consumers. What is your philosophy in writing these bright, colorful moments in history and making them appeal to people who might not necessarily jump for them?

AH: History is about people, and too many professional academic historians forget that. For me, it’s all about finding the right cast of characters. If I can find a group of people who lived through an extraordinary time and bring those people alive, then I feel I’m doing my job.

FM: You’ve participated in human rights campaigns and you’ve helped raise awareness of atrocities against the marginalized—I’m particularly thinking of “King Leopold’s Ghost” here—and so I’m curious as to what you think the role of the author, historian, and journalist—particularly the author and historian—can be in sparking change, action, and awareness?

AH: I wish I could say it always worked, to tell a story that needed to be told. It doesn’t always work, but sometimes it does. I’m fascinated by those historical moments where it did work, and certainly in “King Leopold’s Ghost” I was fascinated by the effects of those very dedicated human rights campaigners had and the journalism they did. Similarly, in a book about an earlier time—“Bury the Chains,” about the British abolitionist movement—these people in a way invented investigative journalism and they realized that people were more moved to action by eyewitness accounts of great atrocities than they were by biblical argument, and that was a huge discovery. I’m excited when I can find those moments, but at the same time I find a lot of good journalists writing about terrible scandals that don’t succeed in moving people to action. There’s no rhyme or reason to when something takes off and when it doesn’t.

FM: Moving to “Spain in Our Hearts.” I hate to fall prey to the terrible trap of historical hypotheticals, but what do you think would have happened if Franco had actually been defeated?

AH: A lot of people say we wouldn’t have had World War II but I don’t think that’s true, because Hitler was always aiming eastward. He wanted to conquer Eastern Europe; he wanted to show the Russians who was boss; he wanted the Balkan and Caspian oil fields—that wouldn’t have changed. But, if Franco had been defeated, the people of Spain would not have had to live under a very harsh dictatorship for 36 years, and Hitler would not have had a de facto ally in World War II. Spain supplied a constant stream of strategic minerals to Germany. Franco encouraged 45,000 Spaniards to volunteer for Hitler’s army. He gave Hitler a submarine base for 21 attack submarines on the Atlantic Coast. None of that would have happened

FM: Have you found any parallels in the story of American sympathizers with Republican Spain in any contemporary political or social movements?

AH: Well, sure. I think we all need political ancestors and I think it can be inspiring to focus on people who did something courageous, going against the grain, years ago. If there was a comparable thing today, I would say it’s the battle against global warming. There are hundreds of other good causes, you know, reducing the enormous inequalities in this country and around the world, but that won’t do much good if we’re all under water. For me, that’s the number one battle today and I admire people like the activists of 350.org and so on who work on that issue.

FM: You’ve described the Spanish Civil War as being “the first battle of World War II,” which is not a way I had ever learned about the war before, although it’s not my area of expertise. Can you expand on this idea?

AH: Where else were Americans in uniform being bombed by Nazi pilots, four years before the US entered World War II? Hitler and Mussolini were sending an enormous amount of support to Franco, and clearly saw him as an ideological ally. The Spanish Republic was a democracy, a chaotic one, a disorganized one, but it still was a democracy. I think the people who went there certainly sensed that there was a large war coming and saw this as the first sign.

FM: Two of your books, “Halfway Home” and “Finding the Trapdoor,” have focused on your own stories as opposed to those of people in recent and not so recent history. Can you describe the difference in the authorial process for writing personal narrative and historical nonfiction?

AH: It’s hard to say. In both cases you just have to do your best to tell a story honestly. Sometimes with the personal narrative it takes a long time to figure out just what the story is. The history is a little bit easier because it’s sort of at arm’s length and writing about people long ago, but I like to do both things. I don’t know if I have any personal stories left to tell, but there’s certainly plenty of history out there that needs writing.

FM: When you look at archives and material in archives, how is your viewfinder different when thinking in a pure historical bent versus as an author looking to gather audience appeal?

AH: I think of myself as in those archives with a journalist’s eye. A lot of historians—and historians come in every conceivable flavor—some people are looking for the same kinds of things as I am. I’m looking for human voices. I’m not looking for the history of tax policy on this or that. It’s when I can find human voices that excite me. Diaries, letters, something that lets me know how somebody acted, thought, and felt at a particular time and place. That’s the goal.

This interview has been edited for clarity, length, and style.