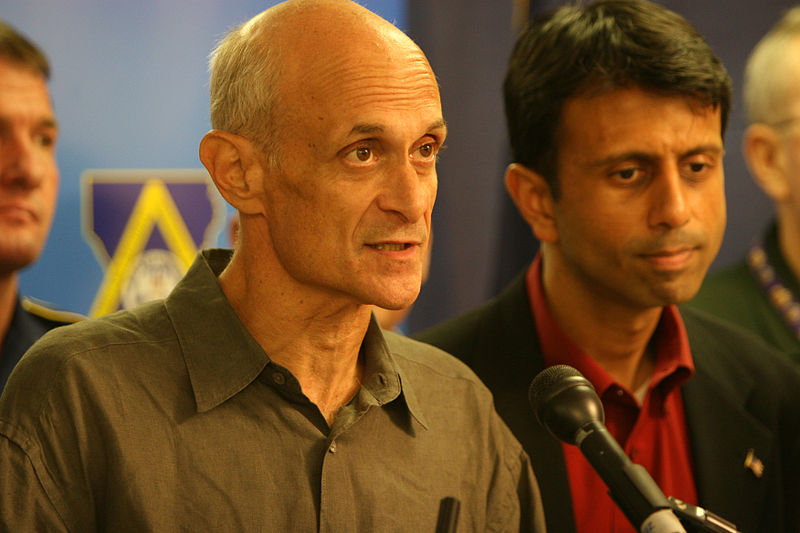 Michael Chertoff '75, who served as the second Secretary of Homeland Security from 2005 to 2009 under President George W. Bush and President Barack Obama, talks immigration, Ebola, and cyber security.

The Honorable Michael Chertoff ’75 served as the second Secretary of Homeland Security from 2005 to 2009 under President George W. Bush and President Barack Obama. After graduating magna cum laude from both Harvard College and Harvard Law School, Chertoff clerked in the Supreme Court from 1979 to 80 for outspoken progressive Justice William J. Brennan Jr. From 1980 to 2005, he served as a federal prosecutor, as Assistant U.S. Attorney General under President George W. Bush, and as Judge of the United States Court of Appeals for the Third Circuit. After leaving government service, he co-founded Chertoff Group, a security and risk management consulting firm. He lives in Washington, D.C. with his wife, Meryl J. Chertoff ’79, and has two children.

Fifteen Minutes: Last month, you and dozens of Republican national security and foreign policy experts co-signed a letter that denounced the views and rhetoric of Mr. Trump, including his plan for the Mexican government to build a wall. As Secretary of Homeland Security under President Bush, you were a vocal advocate of the construction of roughly 700 miles of fencing along the border. Do you still believe that a wall is an effective form of immigration policy?

Michael Chertoff: We looked at the entire southern border. There are some areas where having a barrier gives the Border Patrol an opportunity to intercept people who might otherwise come across the border very quickly and then get onto a major highway and disappear into a cab.

We worked with the Border Patrol and we figured it's about between 600 and 700 miles where a barrier would be useful in terms of—not preventing, because we will never prevent it—really slowing up people trying to get across.

What is more important, and what we deployed, are radar, sensors, and we doubled the size of Border Patrol. Those are the kinds of things that are useful in terms of reducing the flow across the border. I think, obviously, there's more that could be done with respect to illegal immigration, including enforcing interior rules and deporting people who don't have legal authorization, but anybody who thinks just building a giant wall is going to do the trick is in dream land.

FM: In a 2005 Senate hearing, you said, “Our goal at DHS is to completely eliminate the 'catch-and-release' enforcement problem and return every single illegal entrant, no exceptions.” In 2008 you told the AP, “Illegal migrants really degrade the environment. I've seen pictures of human waste, garbage, discarded bottles and other human artifact in pristine areas.” Given the time that has passed since you made those comments, what are your current views on Federal policy with regards to the handling of undocumented immigrants?

MC: First of all, we did end "catch-and-release." Under "Catch-and-release,” we had too slow a process for returning people who we caught crossing illegally, and we had too few facilities to hold them until they could be sent back, so they wound up being released. Over 80 percent never showed up for their hearings, they just disappeared. For some people who wanted to come to the U.S. illegally, it was easier to get in illegally than legally. All you have to do is cross the border and then when you're caught, you'll get released and you'll go hide. It's very bad to suggest to people that the route to immigration should be illegal rather than legal.

What we did was streamline the process for sending people back. That meant in a matter of months, basically for anybody who was caught, the exception being humanitarian reasons. That was part of what enabled us to begin to depress the flow of people crossing the border illegally.

What I said in 2008 is true. My point was, if you have a lot of illegal immigration traffic in a central area, you’re not going to have a pristine environment. Because if you looked at the areas where you had a lot of crossings, you did see a lot of garbage, a lot of waste, animals were being killed. There was no environmental benefit in not having the infrastructure to be able to control the border.

I think the right answer is what we said back in 2007, 2008. We should have an efficient system for legally admitting temporary workers who want to work in the country temporarily, who are filling employment needs. We should have an orderly process for people who want to become citizens, but it should be through the front door, and not over the fence.

FM: After the attacks in Brussels, Ted Cruz said, "We need to empower law enforcement to patrol and secure Muslim neighborhoods before they become radicalized.” How do you believe the Federal Government should best prevent domestic and terror attacks?

MC: First of all, we don't really have in this country, unlike in Europe, many so-called, "Muslim neighborhoods.” In addition, the Muslim community in the U.S. involves people from a whole host of countries. Lumping all Muslims together is like lumping all Christians together, and that doesn't make any sense.

First, we need to work with the Muslim community and community leaders to refute the extremist ideology, which the terrorists are using to try and recruit people into their cause. The community leaders need to make it clear this is bogus.

Also, you obviously need to get information when someone is doing something that suggests they're planning a terrorist attack, whether it's getting on social media, or accumulating a large amount of material that is used in bomb making; certain kinds of chemicals.

Finally, we have some intelligence capabilities, in terms of our ability to monitor whether people in this country are communicating with people in Syria, for example. There are a lot of intelligence tools that can be used, and a big part of it is having a good relationship with the communities in which the extremists are trying to recruit.

FM: In recent years, we've had Ebola, then the Zika virus, enter the U.S. and create serious health threats. Given your experience as Secretary of Homeland Security, how should the U.S. deal with highly lethal diseases coming in from abroad?

MC: You want an early warning, as quickly as possible. You can ideally deal with the problem from where it's being generated, rather than waiting for it to come to the U.S.

Some people have said, “Oh, you should shut the borders.” I will tell you, we once modeled an exercise to see—if you shut the borders totally, stopped all air flights and anybody coming in, how much would that delay a pandemic? The answer is about one week. It's virtually impossible to prevent a pandemic. What you do do is seriously damage the economy and make it hard to respond by getting food and medicine in.

What you do want to do is get medicine and treatment out as widely distributed as possible. Have certain protocols in place, to minimize the extent to which people are in proper places where they can pick up the disease. It's very challenging, but I will tell you the one thing that does not work, is trying to close the borders.

MC: The general doctrine, and the general structure of disaster management prior to Katrina, was based on the concept that local and state government would provide the response. The ideal was not that the federal government be the first responder. That almost always works well, because most states, particularly states in the hurricane zone, had a pretty well-developed system for dealing with hurricanes.

With Katrina, the locality and the state were overwhelmed and essentially abdicated; they ceased to be able to carry out their functions. For example, the city had no plan for evacuating people. The buses sat in a parking lot until they got flooded. They had no idea how many people were sick or where they were located. It was very difficult to evacuate.

The federal government, which had never been called upon to do this, was forced to improvise, and that was very challenging. After that experience of Katrina, we decided we were going to change the doctrine. We were going to prepare the federal government to be a first responder of last resort, which meant building a set of capabilities about evacuation and other things that we would use if the state or city somehow was not able to carry out its responsibility.

Second, we realized we needed to build a joint plan with the state and local governments. If something happened, we all knew what our roles were, we knew where people were that had to be evacuated.

FM: Over the last 10 years especially, cyber security has come to the forefront of U.S. national security policy. Under your tenure, in what ways were you able to strengthen Homeland Security's ability to respond to cyber threats and cyber terrorism? In what ways do you believe that the department should continue to improve?

MC: During my tenure, we met regularly with Defense Department and the Intelligence Community and began to develop what was called the “Comprehensive National Cyber-Security Initiative,” which was the first ever to pull together all the elements necessary to have a comprehensive cyber security approach.That means getting the resources and plans, so that the federal government can increase its ability to protect against cyber attacks.

In this area, much of the responsibility has to be with the private sector, because most of the assets and networks that are the target of an attack are in private hands. The federal government doesn't operate them and the federal government doesn't live on those networks, so a lot of what the U.S. government has to do is to facilitate the private sector raising its capabilities and having better access to information. There's been progress made in that direction, but we still have a way to go.

From Response to Responsibility 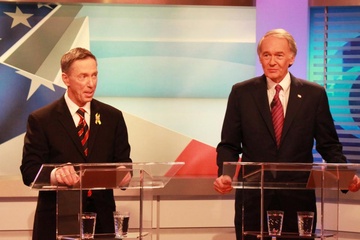