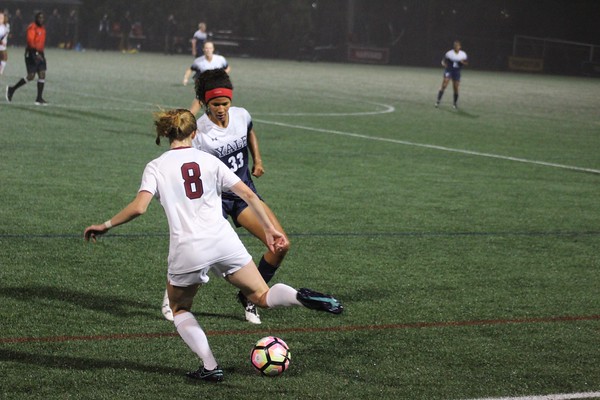 After outscoring its opponents 11-3 over the course of its current five game winning streak, the Crimson look to stay unbeaten in conference play as they take on Cornell on Saturday. Cornell comes into the match struggling after managing only one goal over the past seven matches .

The Harvard women’s soccer team is on a roll at the moment, having outscored its opponents 11-3 over the stretch of its current five-game winning streak.

Determination, energy, and a will to keep chipping away have been the ingredients to its late success.

“We believe in ourselves,” head coach Chris Hamblin said. “We’re capable of coming back from being a goal down, or taking our opportunities, and making sure that we’re focused on the moment and not looking back or looking forward.”

The Crimson (7-3, 2-0 Ivy League) will look to build on what’s made them so successful this year as it prepares for a home match against visiting Cornell (3-6-1, 0-2) on Saturday afternoon.

The Big Red is coming off a 5-0 drubbing at the hands of Penn, while Harvard rolls into its next game off the heels of a 2-1 comeback victory over Yale that energized the entire team.

“I was so impressed by the energy that we displayed against Yale,” Hamblin said. “Our focus has been on improving each game, and we think we’ve been doing that right now.”

The energy was visible in the way the Harvard bench exploded after both senior forward Midge Purce’s game-tyer and junior midfielder Caroline Chagares’ game-winner against Yale.

The team’s momentum has been steadily growing, complementing the drive to win that has been evident from early in the year.

“One thing that has honestly impressed me is the maturity on the field all of our team, from the freshman up to the seniors,” senior goalkeeper Lizzie Durack said. “I feel a bit of a drive in this year’s group that maybe wasn’t as strong last year.”

Playing against Cornell will require the same amount of everything—nothing in the recipe has changed.

“Our game plan is the same as we’ve been doing all year, which is just focusing on ourselves, making sure we are executing to the best of our ability, and improving incrementally,” Hamblin said. “We do try to understand where [Cornell’s] strengths and weaknesses are, and see how we can fit our game plan into that, but we really look at ‘us’ as the primary focus of what we’re trying to achieve.”

While the Crimson is focusing on maintaining on its own drive and focus, the Big Red comes into the matchup with a mightily struggling offense and an 0-2 record within the conference. Cornell has been outscored 7-0 by Columbia and Penn, combined, and has only found the back of the net once over the course of its last seven games overall.

“Cornell’s in a tough spot, having lost the first two, but everyone’s still alive,” Hamblin said. “We’re expecting Cornell’s best, and we know they’re a good team…they’re a team that’s going to be well-coached, well-prepared.”

Harvard boasts star power up front with Purce on pace for a personal-best season, as she now has 20 points on nine goals and two assists over 10 games.

With six games left on the Crimson’s schedule, Purce is well on her way to surpassing her marks of 11 goals in a season, set during her freshman and sophomore campaigns.

AROUND THE IVIES: Harvard Football Still Waiting on a Real Challenge