NOTEBOOK: Men's Basketball Surges Into Tie For First With Victory Over Yale 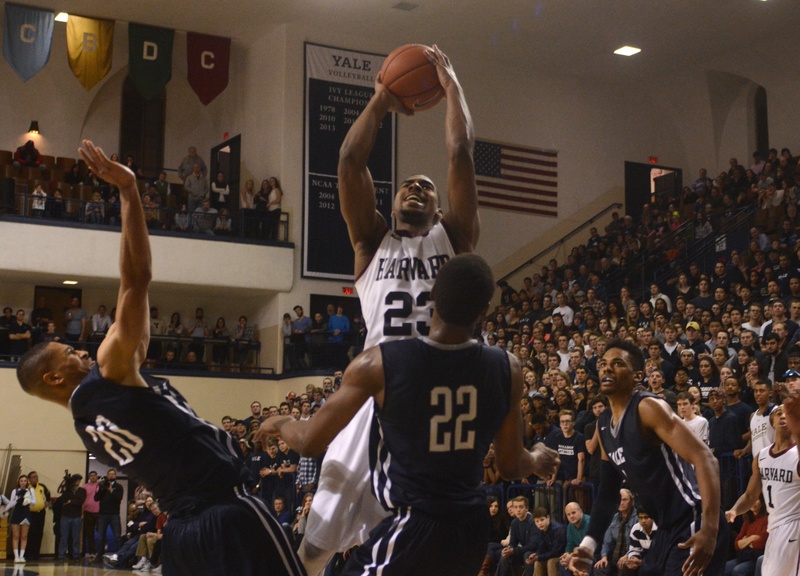 NEW HAVEN, Conn.—After an onslaught of Yale three-pointers had kept the Bulldogs within three through 35 minutes of play, it took just a quick look from junior co-captain Siyani Chambers up at the shot clock to create some breathing room for his team and silence a rowdy New Haven crowd.

With just under five minutes to play, sophomore guard Corbin Miller sent the ball to Chambers at the top of the key. With the shot clock ticking down to five, Chambers stared down his defender before pulling up and letting the trey go about 24 feet from the hoop.

The attempt was good, stretching Harvard’s advantage to six and stymying any offensive momentum that the Bulldogs had built up to that point. The home team wouldn’t score again until there was just 1:25 left in the contest, and by that time it was too little, too late for Yale (16-7, 5-1 Ivy).

When the final whistle blew just a few minutes later, the momentum regained by Chambers’s three helped Harvard reclaim the top spot in the Ancient Eight standings, as the Crimson (15-5, 5-1) took down Yale, 52-50, Saturday night at John J. Lee Amphitheater.

“Obviously we’re proud of our kids for an amazing weekend,” Harvard coach Tommy Amaker said. “Coming here tonight with this kind of environment, playing a team that in all honesty has been playing the best in our conference…. Coming off of last night’s overtime win, [we knew] how difficult [tonight’s game] was going to be and it certainly proved to be exactly that.”

Ninety seconds after the Chambers triple, the task of making a play with the clock winding down fell to senior wing Wesley Saunders. With Bulldog standout guard Javier Duren between him and the basket, Saunders put the ball on the floor, driving into the middle of the paint before elevating and letting go a soft, short floater over Duren’s outstretched arm. The shot went through the hoop as Saunders landed near the left block, extending the Crimson lead to eight for the first time since the 8:15 mark of the first period.

With the Bulldogs struggling from the field—missing a layup and two jumpers in just a 90-second span—the rest of the game was an exercise in clock management and free throw shooting. The Crimson shot six-of-nine from the line in the final 49 seconds of the contest, including two crucial free throws from Saunders with six seconds to play and his team clinging to a two-point advantage.

The senior sunk both, and moments later the score went final. As Harvard jogged off the court, the typically-stoic Saunders looked towards his bench and cracked a smile. Saturday’s contest had been considered by many to be the must-win game of the year for Harvard, and it did just that, holding off one of the best Yale squads in recent memory.

“We knew that we were going to come in to a hostile environment and we were going to have to be ready to battle,” Saunders said. “And I think that everybody came out and showed that they were willing to fight, and I think we left it all out on the court.”

For the highest-scoring team in the Ancient Eight, Saturday’s opening half marked a series of lows. In the first 20 minutes of play, Yale tallied more turnovers (five) than field goals (three), with its 13.6 percent shooting from the field leading to only 11 points by intermission.

While Yale scored the first basket of the game on a Matt Townsend jumper, the squad wouldn’t connect again from the field for almost seven minutes, when Greg Kelley sliced through the lane and laid the ball up in traffic.

In what was billed as a matchup of the Ivy’s best offensive team taking on the best defensive team, the Bulldogs did not play their part. Yale missed almost as many shots in the opening period—19—as it made in the game—20—with Saturday’s performance marking both Yale’s worst shooting outing of the season and the fewest points Harvard has allowed in a half since Amaker was appointed head coach.

“[On] offense we just did not do what we planned to do,” Yale coach James Jones said. “We didn’t move the ball well enough to be successful offensively, and when we did, we got good shots, we just didn’t do it enough tonight. We tried to hit a homerun on almost every play.”