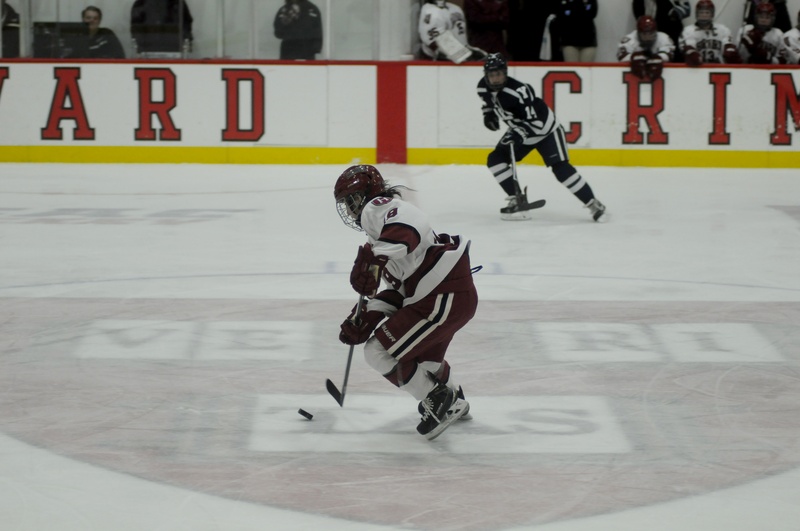 After picking up a goal in Game 1, junior forward Miye D'Oench logged an assist in Harvard's 3-0 series-clinching win over Yale on Saturday.

Just like in last year’s postseason, the No. 4/4 Harvard women’s ice hockey team opened the ECAC quarterfinals with a home fixture against Yale.

With the wins, Harvard locked a spot in the ECAC semifinals next Saturday at home against Quinnipiac.

While 2014’s starting goaltenders made repeat appearances in the net (junior Emerance Maschmeyer for Harvard and senior Jaimie Leonoff for Yale), it was a totally different story, as Maschmeyer earned the 12th shutout of her collegiate career in far less time than the six hours she spent between the pipes last year.

“I wanted to have a good start,” Maschmeyer said. “As a goalie you want to make sure you play solid from the beginning. You don’t want to let anything in right off the start so focusing one puck at a time was the key.”

Harvard’s blue line proved crucial in stopping the puck before it could even enter striking distance for Yale, as the Crimson gained an overall edge in shots on goal, 37-24, with the greatest leads coming during the second period and towards the end of the third.

Meanwhile, at the other end of the ice, a trio of Harvard skaters—sophomore forward Sydney Daniels, co-captain and forward Samantha Reber, and senior defender Josephine Pucci—struck gold against Leonoff, with a pair of scores in the first period and one in the second to seal the win.

Harvard coach Katey Stone attributed the win as telling of the specific adjustments and increase in energy that the Crimson made between Friday and Saturday’s game.

“We took time and space away everywhere,” Stone said. “We made it really tough for them. We were on their hands all day. We had good looks at the net. We brought the puck to the middle of the ice a bit more which was a big thing for us and made the goaltender really have to move in her crease.”

Still, despite the high stakes or perhaps poetic nature of the matchup, the focus was on playing what Stone and players call “Harvard hockey” for a reliable, and hopefully victorious, effort.

“Last year was a different year,” Maschmeyer said. “I went into it saying, ‘This is a hockey game, play my game, don’t change anything, and anything can happen.’”

An early score from the Bulldogs was no impediment to a Crimson win on Friday afternoon as Harvard beat Yale, 2-1, to open the quarterfinals.

Bulldogs’ junior forward Jamie Haddad, who holds top marks in both points (25) and goals (11) for her team this season, tallied Yale’s sole goal, which came 3:43 into the second frame. Meanwhile, Harvard junior forward Miye D’Oench and teammate Daniels, who pace the Crimson’s offense with 17 and 18 goals each, respectively, chipped in Harvard’s two scores within five minutes of one another later in the second.

“I thought it was an awesome win,” D’Oench said. “They battled, especially at the end, but we battled right back, so it was a lot of fun to play in. A little more suspenseful than maybe we would like, but those are the ones that are fun.”

The first and third periods were both scoreless, while the Crimson’s speedy team gained an advantage in shots on goal through the entire game, winning the final tally, 41-23.

“It was a hard fought hockey game,” Stone said. “We took an inordinate amount of shots, and [Leonoff] stood on her head, and our goalie was up for the task as well. It was tough to score goals on either end of the ice, so [there] was a small margin of error.”

—Staff writer Michael Ledecky contributed to the reporting of this story.

AROUND THE IVIES: Men's Basketball Seeks to Expand Lead Atop Ivy League