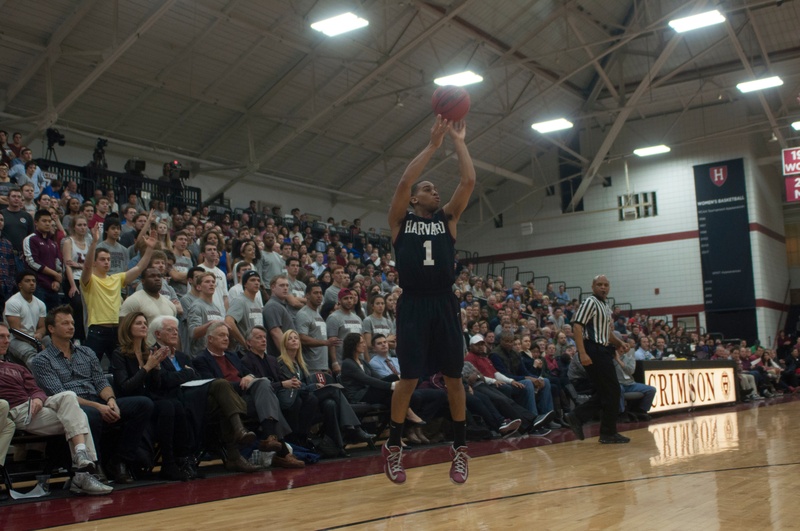 Junior co-captain Siyani Chambers is shooting 34.2 percent from beyond the arc for the season.

In what might be most accurately described as a methodical blowout, the Harvard men’s basketball team effectively silenced Penn for a nine-minute span in the second half of Friday night’s contest, enabling the Crimson to cruise to its seventh consecutive conference victory.

While Harvard never trailed after the 17:52 mark of the first period, the Quakers managed to stay in the contest for much of the game, with a Darnell Foreman three-pointer bringing the visiting team within six with 14 minutes to go.

But five minutes of scoreless play from Penn gave the Crimson all the time it needed to create some breathing room—and it took advantage, going on a 12-0 run and digging a hole that Penn could not climb its way out of. When the final buzzer sounded, Harvard (18-5, 8-1 Ivy) had earned its fourth-straight 20-plus-point victory over the Quakers (7-15, 2-6), winning, 69-46, Friday evening at Lavietes Pavilion.

“I think we just came out with more intensity in the second half,” senior wing Wesley Saunders said. “We gave up some easy points in the first half, so we wanted to lock down defensively and just put our mark on the game.”

A subsequent steal and coast-to-coast lay-in from junior co-captain Siyani Chambers followed by two free-throws from fellow co-captain Steve Moundou-Missi tied Harvard’s biggest lead of the night at 14, setting the stage for freshman Andre Chatfield to bring the Crimson bench to its feet 20 seconds later. After another Harvard steal, Chambers sent a bullet pass to the rookie, who was waiting in the left short corner—Chatfield took just one dribble to get to the paint before flipping up and in a baby jumper.

One more field goal—this time a right-wing jump shot from Moundou-Missi—capped off Harvard’s 12-0 run. The Quakers’ three-pointer on their next possession ended their 5:17 span without a field goal, but it was too little, too late for Penn, which committed more turnovers (five) in that stretch of time than the Crimson did in the entire second period (four).

For Amaker, it was an uptick in Harvard’s aggression on the defensive end that enabled the team to run away with the game after intermission.

“I thought our defense again was our calling card and was the difference for us,” Amaker said. “When we were able to get our defense set and lock in [early in the second half], I thought we were pretty solid.”

While the run may have begun on the defensive end, Friday night marked the best shooting performance the Crimson has put up since its season opener on Nov. 14, knocking down shots at a 53.2 percent clip.

Led by Saunders, who connected on seven of his nine field goal attempts en route to a game-high 15 points, Harvard did the majority of its damage off of turnovers and on second-chance opportunities, outscoring Penn by a combined 32 points in the two categories.

Saunders was aided by his co-captains, Chambers and Moundou-Missi, who totaled 24 points on an efficient 8-of-13 shooting performance from the floor.

While the Crimson relied on several familiar faces, the Quakers were forced to turn to some fresh bodies to shoulder the burden on the offensive end. Just hours before tipoff, Penn announced the two-game suspension of leading scorer Tony Hicks, paving the way for freshman guard Antonio Woods to pace his squad on the evening. The rookie tallied team-highs in points (12), assists (four), and minutes (33), often being face-guarded by Harvard’s best defender in Saunders.

For Amaker, the Crimson’s play on Friday night was indicative of a team hitting its stride at the right moment in the year. With his program winning consecutive games by a double-digit margin for the first time since the beginning of January, Amaker believes that the mindset the Crimson has at this point in conference play bodes well for the team as it prepares for the season’s final stretch.

“We’ve been really focused on continuing to get better,” Amaker explained. “I think we’re showing signs of improvement.… I like that about our ball club, that we’re still working to improve. If teams can adopt that mentality and that attitude, I like to think there really are good things in store.”

Around the Ivies: Chambers Key For the Crimson's Success Down Stretch