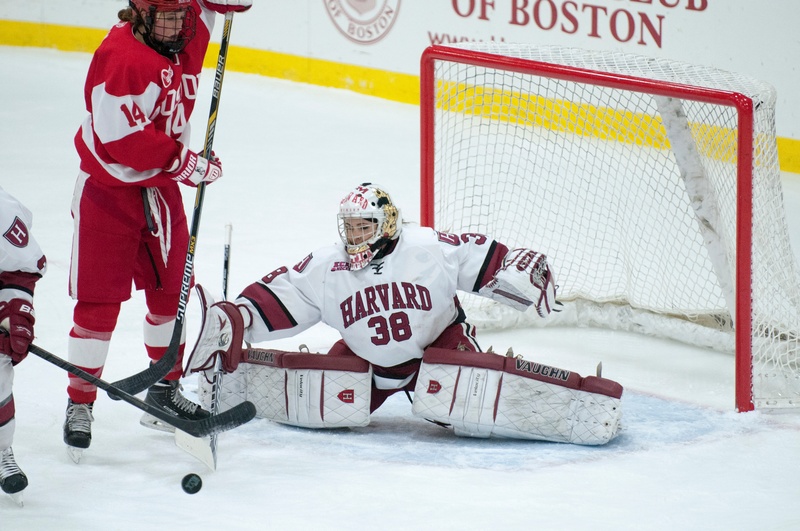 Junior netminder Emerance Maschmeyer followed up her MVP performance in the Beanpot by allowing just one goal over the weekend, making 37 saves in the process.

After finding itself in a near dead heat at the top of the ECAC women’s ice hockey standings, the No. 4/4 Harvard squad swept its final regular season road weekend to break through to the top of the league heading into the final stretch of the year.

The Crimson (21-4-2, 16-3-1 ECAC) took down Cornell, 4-1, and trounced Colgate, 5-0, to gain a three-point advantage on the conference leaderboard over second place teams Quinnipiac and Clarkson. Harvard will face Colgate and St. Lawrence this coming weekend—its final regular season pair at home—already having secured home ice at the Bright-Landry Hockey Center for the ECAC tournament at the end of the month.

“We want to finish the regular season with the kind of intensity and that focus we’ve gone about our business [with] for the majority of the year," Harvard coach Katey Stone said. "And certainly the second half [of the season]."

Crimson junior forward Miye D’Oench nabbed her third three-point performance of the season on Saturday, as Harvard blanked the Raiders (4-15-1, 7-24-1) to complete the weekend sweep. D’Oench’s pair of goals and one assist helped bring the Crimson winning streak to six games.

Meanwhile, Harvard’s defense remained steady as the Crimson killed three penalties, leaving opponents 0-for-8 on the power play this weekend and 0-for-16 over the past four games.

“I think our kids are doing a much better job of reading the power play—[knowing] when they can pressure and when they can be more strategic like they were against Boston College [on Feb. 10],” Stone said. “Your penalty kill starts with your goaltender too, but we’re also giving up very few shots on the opponent’s power play, which is huge for us.”

Following Harvard's first matchup with Colgate—a 6-1 Crimson victory—senior defenseman Josephine Pucci pointed to a balanced attack as the reason behind her team's success.

“[A] big thing is that we have a lot of depth,” said Pucci following the Jan. 24 contest. “That’s going to help us wear down teams.”

Co-captain Marissa Gedman and freshmen forwards Karly Heffernan and Haley Mullins helped reiterate that point, each scoring a goal apiece in the rematch, with Gedman’s coming on the power play.

Starting in her first game this season, Colgate goaltender Susan Allen yielded three goals during her 31 minutes in goal and was replaced by second stringer Brittney Brooks for the second half of the contest. Still, Harvard’s quick-moving offense created two goals against Brooks, while the Raiders were unable to string together any offensive momentum with just 18 shots on goal throughout the contest.

Coming off its win over No. 1/1 Boston College for the Beanpot title, the Crimson successfully converted championship energy into a victory over the Big Red (14-9-3, 12-5-2).

“That’s a really tough game to play right after a big win like that,” Stone said. “You turn around and have a huge game against Cornell up in their barn. I thought our kids handled it really well.”

While Cornell may have been first to score—senior forward Emily Fulton struck just two and a half minutes into the game, marking junior goalkeeper Emerance Maschmeyer’s only goal allowed all weekend—the Crimson controlled the ice throughout the game.

Sophomore forward Sydney Daniels chipped in two goals, one each in the first and second frames, to pace Harvard. Co-captain Samantha Reber scored while the Crimson was on the power play—its sole conversion over four tries—and junior forward Mary Parker drilled an empty netter in the last 30 seconds of the contest.

The Big Red was no match for Harvard, as they allowed 42 shots on goal while only mustering 24 of its own over 60 minutes of play. The win closes out Harvard’s slate of Ivy League games, having lost two—to Dartmouth and Princeton—and having won the other eight. En route to the victory victory, the Crimson killed five penalties to render Cornell powerless on the power play.

“It was a gritty win,” Stone said. “It wasn’t a pretty game necessarily. It was a defensive battle.”