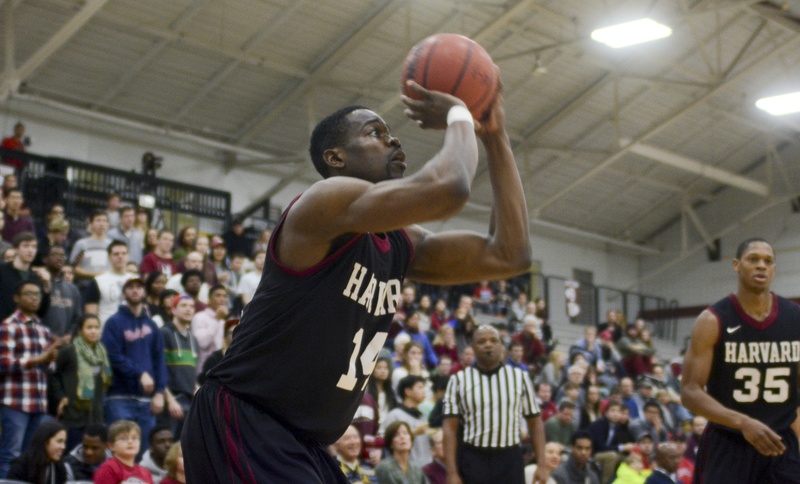 Senior Steve Moundou-Missi led the scoring charge for the Crimson, adding 12 points on the night.

Just two minutes after intermission, an errant Cornell pass landed in the hands of co-captain Steve Moundou-Missi. The big man shoveled it ahead to classmate Wesley Saunders, who tossed it up the court to a streaking Agunwa Okolie. Okolie took a handful of dribbles before elevating, cocking back his right arm, and slamming the ball home.

The Big Red whistled for a timeout as the Harvard student section jumped to its feet. The Crimson still only led by four—but it was enough. The run had begun.

After a lackluster first half in which both teams struggled from the floor, the Harvard’s men’s basketball team wasted no time after intermission, jumping out to a 22-2 run to begin the period. Cornell (12-12, 4-4 Ivy) just couldn’t match the Crimson’s offensive awakening, and fell to Harvard, 61-40, Saturday afternoon at Lavietes Pavilion.

“I was very pleased and impressed at how we were able to grind a bit in that first half—not shooting the ball well at all, that was a good sign that we didn’t give in completely,” Harvard coach Tommy Amaker said. “[We] had fun playing as we [went] ahead…. The dam broke a little bit for their team and that allowed for us to get ahead and have a comfortable margin as the game went on.”

After an unusually quiet first period for Saunders in which he failed to score a single point, it was he who began the tear for Harvard (17-5, 7-1). Coming out of the break down three, Saunders scored on two of his team’s first three possessions, knocking in a fade-away bank shot and a trey to give the Crimson its first lead since the 10:57 mark of the first period.

The Okolie dunk just one minute later extended Harvard’s advantage to four, before sophomore Corbin Miller and junior co-captain Siyani Chambers combined to hit four threes in five minutes from the left wing, right in front of the Crimson bench. With just over eight minutes gone by in the period, Harvard was running away with it, having pushed its lead to 17, 43-26.

“[We always] talk about the first four minutes of the second half and what team is going to seize control of the game, and I thought our kids did a magnificent job of that [tonight],” Amaker said. “No one was hunting for their shot. We have a phrase we use: ‘Let the shot find you.’ I thought our guys did that in the second half very well.”

On the next Harvard possession, Chambers turned away a pick at the top of the key to send the ball to Moundou-Missi in the right corner. With his feet just in front of the three-point line, the senior buried the deep jumper, effectively burying the Big Red with it as the basket put a cap on Harvard’s 22-2 run.

With Cornell held to just one field goal in those first nine minutes of play, both Amaker and his players attributed the team’s offensive success to its effort on the defensive end.

“We knew that we had to continue to lock down on defense,” Miller said. “We know as long as we’re playing solid defense…shots were going to fall eventually.”

For the game, Harvard was led by a coterie of role players, with typical-leading scorer Saunders struggling to find his shot: Moundou-Missi paced the team with 12, while Chambers and Miller added 10 apiece.

On the other end, Moundou-Missi was tasked with the biggest defensive assignment of the night as he matched up against Cornell standout forward Shonn Miller. Both Miller’s scoring and his shooting percentage took a dip on the night, as the big man converted only one of 10 attempts from the field, totaling 10 points—6.1 under his season average.

Although it was the Crimson’s triples that highlighted the second period, the first half was a markedly different story. Harvard went 0-for-8 from beyond the arc, and while the Crimson shot just 31 percent from the floor, it held Cornell to an even lower percentage—27.3—as the Big Red had as many field goals, six, as turnovers.

But a steady flow of fouls from Harvard’s big men sent the visiting squad to the line 12 times, where it did much of its early damage, missing just one from the stripe. While the Crimson chipped its way back into the contest before the halftime buzzer, the remnants of its offensive drought remained as the Big Red held a slim advantage heading into the locker room.

But the bevy of Harvard triples and Okolie’s one-hand slam did away with those last remnants, earning the Crimson its ninth-straight win over the Big Red.

“[This win] definitely gets our confidence up because we’ve been giving up big leads lately, so now that we know that we can actually close a team out, hopefully that will carry over into the rest of our games,” Saunders said. “[Cornell’s] a good team, so this was a great test.”