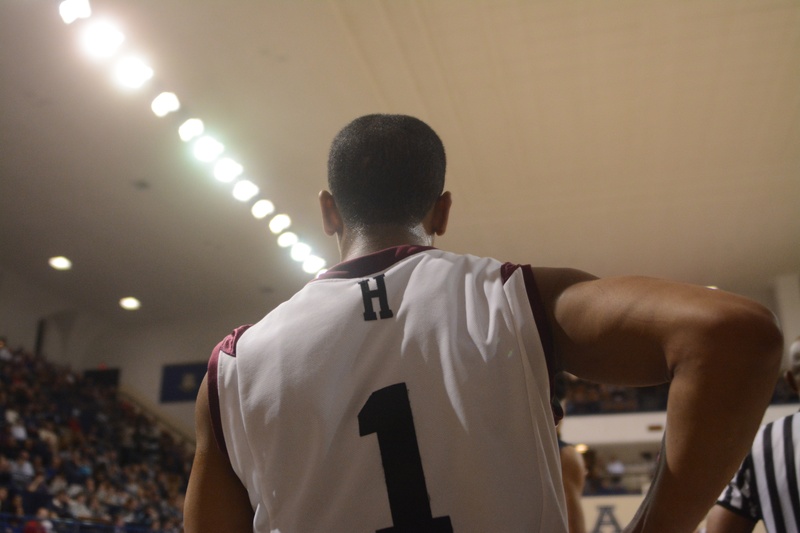 Junior co-captain Siyani Chambers had his best shooting performance since November on Friday, lifting the Crimson to a 72-68 win over the Lions.

Chambers had just missed the front end of a one-and-one and, on the previous Harvard possession, had taken an ill-fated, step-back three pointer that ricocheted off the backboard and into Columbia’s waiting hands. With the game clock ticking towards 10 seconds and the Lions down three, Columbia’s standout point guard Maodo Lo penetrated into the paint and kicked it out to forward Jeff Coby, who drilled the open trey, tying the game at 68.

Amaker didn’t call for a timeout, and Chambers brought the ball up the floor, just eight seconds remaining. The junior hesitated at the right wing before taking two hard dribbles inside the perimeter, sending Lo flying as he let the shot go. The ball splashed through the hoop as Chambers fell backwards, marking the final bucket of the best shooting night he’s seen since the season opener against MIT on Nov. 14.

“Luckily, we had some time on the clock, and we go over situations [like these] all the time in practice—we just try to get the ball out quick, get it up, and try to get a good look,” Chambers explained. “[L]uckily enough, I was able to get down to the wing and make a shot.”

For the game, Chambers shot 6-of-11 from the floor, knocking down three of the five treys he attempted. It was the first time since a January 2014 loss to the eventual-national champion Connecticut that the point guard made six field goals, while his 16 points tied his season high.

“He made a great decision [at the end],” Amaker said. “I thought it took a great amount of guts from his part after the way he missed the previous shot…. [W]e’re very proud of him—he did exactly what our philosophy [dictates] and how we want to play that type of situation.”

The contest was a matchup of two of the league’s premier floor generals, a head-to-head that saw Lo—Columbia’s leader in steals, who, at 6’3”, has also climbed to third on the team in blocks—guard Chambers for much of the game. Despite the defensive pressure, the latter didn’t commit a single turnover on the night—the first time he’s been spotless since that November game against MIT.

If Harvard’s offensive performance in the first half of its game against Yale last Saturday could be described as a drought, the opening 20 minutes against Columbia might be best called an onslaught.

After only scoring 16 points prior to intermission against the Bulldogs, the Crimson scored 18 in just over six minutes of play on Friday, soon tripling last Saturday’s first-half performance with 48 points by the end of the first period.

The 180-degree offensive turnaround could be attributed to the hot shooting of nearly every Harvard player that stepped onto the hardwood, as the team shot a cool 63.6 percent from deep in those opening minutes. Led by senior wing Wesley Saunders, who notched 16 points, three rebounds, and three assists on 5-of-8 shooting in the first half alone, the Crimson leaned on its perimeter play early and often.

After the Lions made the first hoop of the game, Harvard went on an 18-3 tear, holding the visiting squad to just one basket in five minutes, beginning at the 18:29 mark. The run was punctuated by consecutive threes from Chambers and Saunders, each one assisted by the other, before Saunders grabbed a Lion rebound and went coast-to-coast, skipping into the lane and drawing the foul to bring the score to 15-6. A second Chambers trey two possessions later capped off the spurt at 18-6, and the Crimson was able to coast for the rest of the half.

Accompanying the offensive performance was an active defensive effort for Harvard, which nabbed four steals before the break.

“I was really, really pleased and proud of our guys for being ready to go tonight,” Amaker explained. “You saw the energy and effort that they were playing with on the defensive end in the first 20 minutes and how that led to so much positive stuff offensively.”