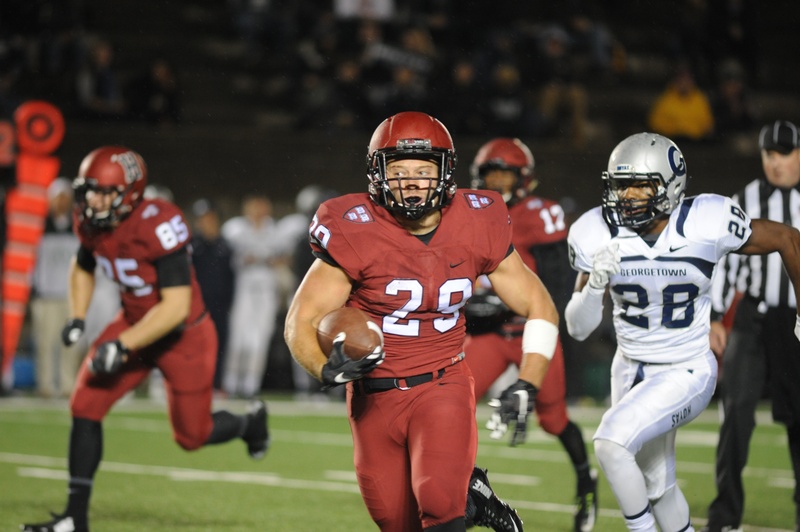 Senior running back Paul Stanton racked up 113 yards and two touchdowns in the first half against Georgetown. The Crimson cruised to a 45-0 victory.

Harvard football (3-0, 1-0 Ivy) may have looked different over the first three weeks of its season, but the team has played the same way—with total dominance.

For the third weekend in a row, the Crimson controlled all aspects of its matchup, this time jumping to a 31-0 halftime lead against Georgetown (2-3) before cruising to a 45-0 shutout at Harvard Stadium.

“It might be one of the best football teams I’ve seen since I started coaching at this level,” Hoyas coach Rob Sgarlata said. “They’re well-coached, ran the ball very well, and executed the entire time.”

Already up 10 at the end of the first quarter, Harvard restarted play with a bang—the team’s third blocked punt of the season. On this night, it was sophomore cornerback Tanner Lee who lunged forward to deflect the kick.

Six plays later, junior running back Paul Stanton reaped the rewards, taking a handoff, bouncing off a blocker, and outracing the secondary to secure a touchdown and a 17-0 lead. He finished with 113 yards, all of them before halftime.

“I’ve never seen so many blocked punts,” Murphy said. “I hope we haven’t used up our allotment for the year, but we’ve done a great job pressuring the punter in a lot of really creative ways.”

It didn’t get better for the visitors. On the next possession, Georgetown quarterback Kyle Nolan dropped back on second-and-13 only to absorb a blind-side hit from junior defensive lineman Miles McCollum.

The ball popped out, and captain Matt Koran grabbed it. Freshman running back Noah Reimers completed the swing two plays later with a jump-cut touchdown, pushing the margin to 24.

That defensive takeaway was just one highlight of many in an impressive performance for the unit, which held the Hoyas to 222 yards. Five players recorded at least four tackles.

“We have a lot of great athletes out there,” senior linebacker Eric Medes said. “[We] just know how to put [ourselves] in the right place at the right time with the game plan.”

Reimers also played a consistent role, largely thanks to the early and sizable lead that Harvard built. Along with the score after the Koran fumble recovery, the freshman added two goal-line touchdowns in the third quarter and drew an enthusiastic reaction from the crowd after hurdling a defender midway through the period.

In the red zone, however, Reimers shared scoring opportunities with senior quarterback Scott Hosch, who plunged into the end zone at the end of the second quarter. That score capped a 10-play drive and sent the Hoyas into halftime facing a 31-point deficit.

The lopsided score line obscured a few instances of early sloppiness from the Crimson. In the first quarter, Harvard’s kickoff return team surrendered an average of 28 yards, and the referees penalized the Crimson three times.

One of these whistles, a call for an illegal block on the defense, gave Georgetown a 33-yard field-goal attempt. But Hoyas kicker Henry Darmstadter pulled the kick wide left, setting the stage for a long night for the visitors.

By that point, Harvard already held a 10-0 lead. The Crimson’s first drive of the night had stalled in the red zone, giving sophomore Kenny Smart the opportunity to convert the first field goal of his career, a 31-yard boot.

With 12:45 left in the fourth quarter, Darmstadter had a chance to one-up Smart when Georgetown lined up for a 42-yard field-goal attempt. But the long snapper delivered a low ball, ending the Hoyas’ last best chance at breaking the shutout.

Harvard’s steady domination meant that for the third straight week, the second team saw major action. Six different players took handoffs and 11 caught passes to combine with a first team attack to produce 245 yards on the ground and 249 in the air. On the defensive side, 29 different players recorded tackles.

Still, it was the Crimson first-teamers who jumpstarted the rout in the first quarter.

On Harvard’s second possession, the team drove inside the red zone before Reimers lost the ball at the five-yard-line. But the Crimson recovered, and on the next play, Stanton pushed forward for the score, the first of six rushing touchdowns on the night.

“The bottom line is, the preseason is over,” Murphy said. “Taking nothing away from Georgetown and the two teams we’ve played thus far, we’re going to face a much steeper climb over the next several weeks.”

—Crimson staff writer Sam Danello can be reached at sdanello@college.harvard.edu

Football Set To Host Hoyas Under The Lights